Previous Next Show Grid
Previous Next Hide Grid
Image 1/
Video
Audio
As part of Reconciliation Week the National Gallery of Victoria has been teaching children about activism, connection to culture, and the importance of family and community.
By
Madeline Hayman-Reber

Children from around the country have been engaging in Indigenous art and culture, online thanks to the National Gallery of Victoria's Under 5's program as part of their Reconciliation Week activities.

The sessions are facilitated over online video conferencing by three staff members and focus on a series by artist Julie Dowling titled Federation Series 1901-2001 to educate and bring people together.

"Julie Dowling is a Badimaya woman, and I am a woman and I'm also Badimaya, so it has provided a really good opportunity for me to be able to share my culture," Ms Clinch told NITV News.

"It's also good for wider audiences to hear from Indigenous people about Indigenous culture. It's the best way to be educated on us as a people and encouraging them to engage with the Indigenous collection at the NGV."

Ms Dowling's collection is a series of portraits of her Ancestors who were directly affected by Australia’s Federation, and was created as part of the centenary of Federation - 100 years of Australia’s independence from Britain. The series gives facilitators the opportunity to delve into themes of Indigenous activism, connection to culture and the importance of family and community. 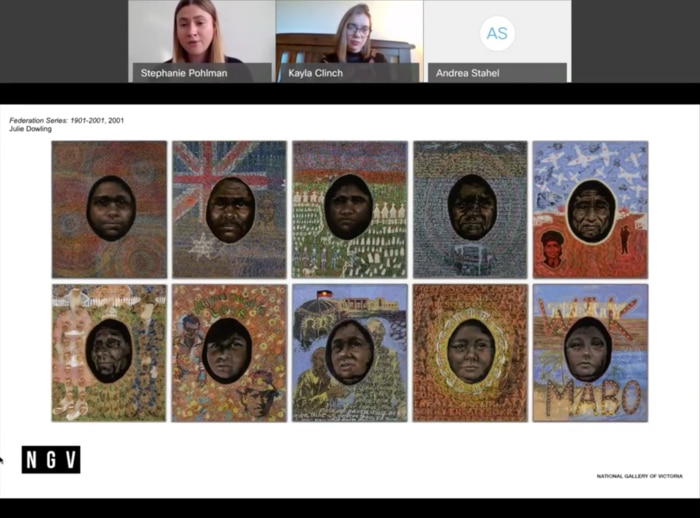 "If we can instil a curiosity for Indigenous art in small children, they're going to grow up into older children and teenagers and adults who have more of an appreciation and respect for Indigenous art and culture. Reconciliation Week is a really important time to do that," Ms Clinch said.

The program has been receiving rave reviews from parents, teachers, and childcare educators, Although Ms Clinch said it has been a little strange talking to children when she can't physically see them.

"They've really enjoyed it. They've been quite satisfied that it felt actually quite interactive, which was really nice to hear because we're a little bit worried, not having the children in front of them if we were, if it would feel that engaging," Ms Clinch said.

The gallery’s Community and Access Programs Manager Andrea Stahel said the accessibility of the program has also been important in breaking down barriers during Reconciliation Week.

“It's really great to see lots of kindy groups. We had one this morning from Sydney log in and say where they are, and whose Country they are coming from,” Ms Stahel said.

“It's really fantastic to see that engagement.”

The final session of the program will be held 10am Tuesday, June 2.

Meet the brothers on a mission to showcase Australia's native food to the world
Food is one of the most accessible ways of learning culture - because everyone has to eat. On Reconciliation Week, Sam and Luke Bourke are hosting private cooking classes, using Indigenous ingredients to share a meal and culture.
Advertisement