COMMENT: What does it take to truly be 'One of Us'?

Previous Next Show Grid
Previous Next Hide Grid
Image 1/
Video
Audio
A question posed in a survey on national identity from countries around the globe has sparked controversy. The findings suggest that your birthplace may not be as critical as you may have thought... And doubly so if you're an Indigenous Australian.
By
Ryan Liddle

The world has never before enjoyed this level of globalisation, cross-cultural pollination and of course, immigration. With the population ever growing and the newer generation's propensity to travel, ethnicity, linguistic and cultural backgrounds are becoming ever more diverse.

These changes throughout the world have been both welcomed and celebrated, but equally shunned and seen as backward steps in terms of national security.

The latter fears of porous borders, changing cultural beliefs and economic stability helped the United Kingdom initiate their break away from the European Union, the rise of far right in the United States and their intended push to build a wall along the U.S.-Mexico border, and more broadly, tighter controls for migration overseas and back home in Australia.

"My families’ connection to this country goes back millennia through our Tjukurpa (Dreamtime story) - Perhaps you'll take take that into account the next time someone asks What it takes to Truly be ‘One of us’."

Recognising the challenges of maintaining and creating a national identity, the Pew Research Center conducted a new survey titled "What it takes to truly be 'One of Us'".

The survey was carried out in 14 countries including the United States, Canada, Greece, Hungary and Australia.

The questions centred around religion, political inclination and western world values and traditions and how they had helped define both old and new nations' sense of self. A blatantly obvious omission in my eyes? Well, oddly the survey questions were bereft of any Indigenous content and how Indigenous people had contributed to a nation’s character, both in a traditional and contemporary context.

One of the questions focused on how much a person's birthplace contributes to their countries national identity. The short answer is, not much. 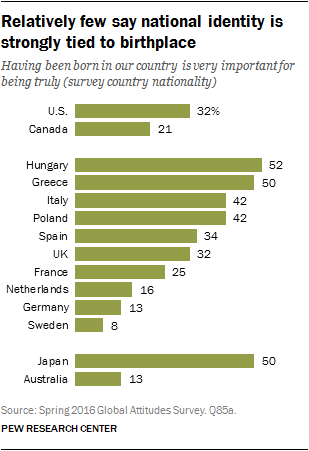 Hungary had the strongest reaction with 52% of those surveyed indicating that they DO believe being born in their country is very important to their sense of identity.

On the other side of the spectrum, it was just 13% for Australia.

Next up, was Language.

The overview of the Pew Research Center poll, which had more than 15,000 respondents, found that Language was a cornerstone of national identity.

In particular, speaking 'the national language' was seen as critical to identity. That vote was 69% to the affirmative, of those surveyed in Australia. 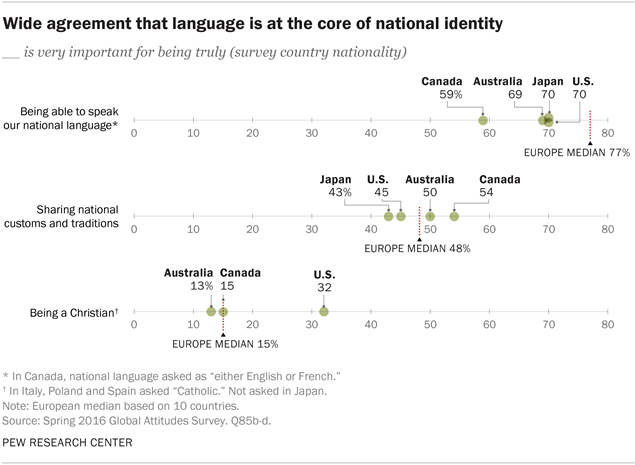 Yet again, another omission.

With over 250 unique Indigenous languages at the turn of late 18th century and at least 150 of those still alive today, the survey didn't include any statistics or questions regarding the significance of the country’s original and still widely spoken languages, like Arrente or Pitjantjatjara of central Australia, or any of the Merriam Mer group of languages in the Torres Strait.

How can a survey purport to define what makes a country, while simultaneously denying the fact that for many First Australians, English, may only be spoken as a third or fourth language? Are they 'less Australian'? Much like the school text books in the areas where these languages remain supreme; it was a case of, English only.

When it came to political affiliations and how they view the different elements of identity, 73% of the United Kingdom's Independence Party were among those favouring the contribution to the UK's national identity, by the sharing of national customs and traditions.

For Australia, 79% of Liberal party voters agreed with that sentiment, compared to 68% from the Australian Labor Party.

"Surely it would seem 229 years of colonisation is merely a grain of sand in an hour glass when compared to at least 40,000 years of continuous culture and civilisation."

Which holidays are observed, the type of food consumed, the style of clothes worn and even the type of stories told to children all came under the 'National custom and traditions' banner.

For religion, the residents of countries like Greece, Poland and the U.S. felt that being a Christian or Catholic was intrinsic to who they were.

In Australia, however, less than half of those surveyed (48%) thought being religious was important to being a 'dinky di ozzy' with only 13% stating it is very important for a person to be a Christian in order to be truly Australian. 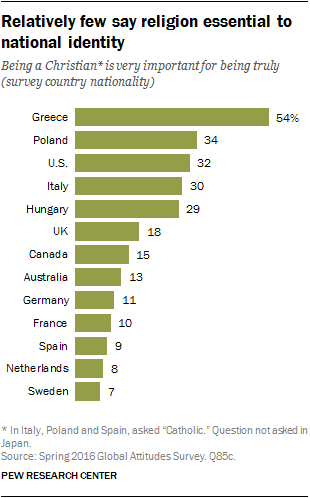 But, how can you define what makes a dinky di ozzy when you ignore the country’s First Peoples and their history? The ancestors of Aboriginal Australians were some of the first navigators, seafarers and astronomers…They lived for a time among giant prehistoric beasts called Megafuana which became exinct in the Pleistocene period some 50,000 years ago. Did I mention Aboriginal Australians were grinding seeds for baking some 12,000 years before the Egyptians?

Surely it would seem 229 years of colonisation is merely a grain of sand in an hour glass when compared to at least 40,000 years of continuous culture and civilisation.

Australians like to boast about this country’s big sunburnt land, its open plains, tropical rain forests, with stunning beaches and rugged interior. Equally so, their knowledge of it… Just read any literature about the early frontiersmen. Their intrinsic knowledge of the bush and how to conquer it was at the forefront of the newly formed Australian psyche.

Once again here, little mention of the countless Indigenous men and women who offered up that thousands year old knowledge at the behest of ‘explorers’…sometimes freely, sometimes under duress… But I digress, and that conversation is maybe best saved for another time….(26/01/2018 perhaps?).

And what of our land down under, centric emphasis on the ‘Great Aussie Battler’ spirit? Does that form part of our identity? Sure, we’ve all got struggles, but how do they compare to some of the world’s worst incarceration and suicide rates that are suffered here? I could go on....

Look - My families’ connection to this country goes back millennia through our Tjukurpa (Dreamtime story)...

Perhaps the next survey and indeed, even the Australian Public will take that sentiment into account, the next time someone asks “What it takes to Truly be ‘One of us’.”

RECOMMENDED ARTICLES:
Voices of History: Language project sees Kayardild recordings returned
From one generation to the next: This new language revival-project aimed at revitalising culture is underway to repatriate recordings in Kayardild back to the community.
Baby names helping Indigenous languages live on
A move towards the revitalization of many Indigenous languages has led parents to increasingly draw on our languages for names for their kids.
Taking Indigenous languages online: can they be seen, heard and saved?
With our digital world dominated by English, minority and endangered languages struggle to be seen and heard. A new interactive documentary launched online today by SBS, My Grandmother’s Lingo, attempts to add one more language to the mix and raise awareness of the plight of small languages.
Advertisement