Boels-Dolmans off to winning start at home Tour

Amalie Dideriksen (Boels-Dolmans) emerged from the bunch after a technical final few kilometres in Stage 1 of the Boels Rental Ladies Tour to sprint to the win. 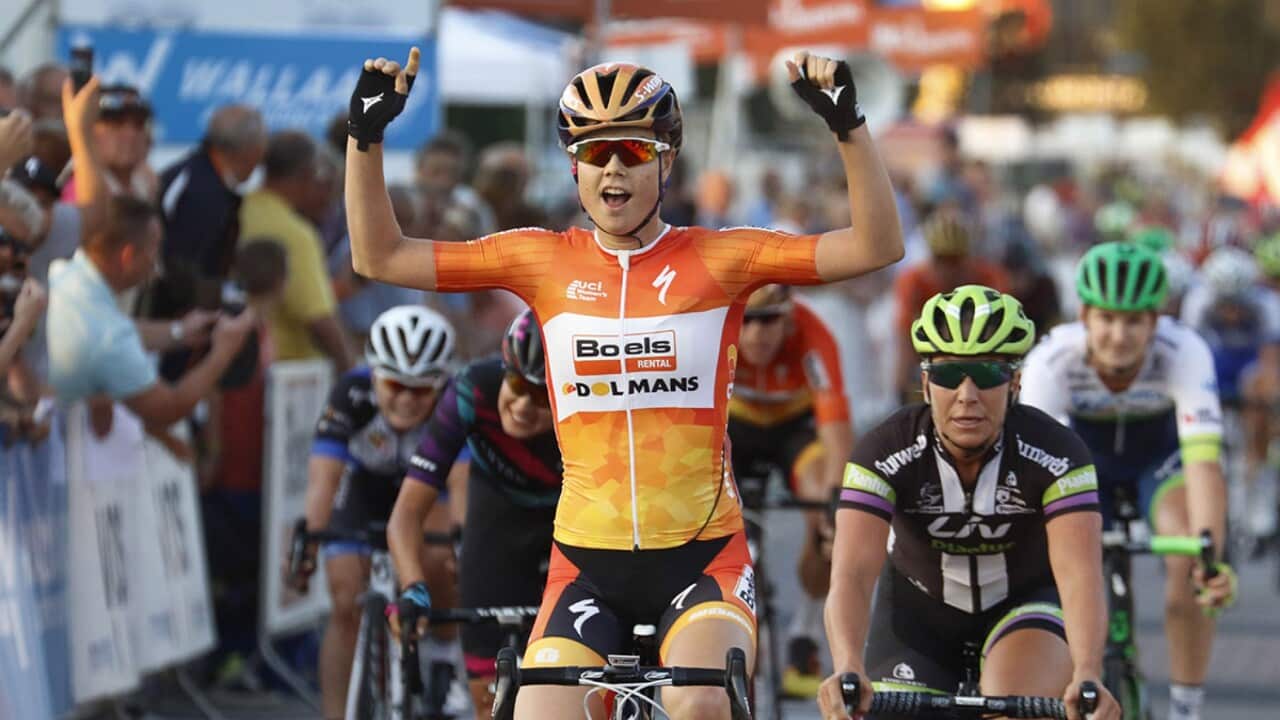 Amalie Dideriksen doesn't often win, but knows how to post up! Source: Boels-Dolmans

Coming out of the final corner in third position, the Danish rider was faster than the rest, beating Sara Mustonen-Lichan (Liv-Plantur) and Barbara Guarischi (Canyon SRAM) to the line to take the win.

“We were all together with five kilometres to go, but we got away from each other around all the corners,” said Dideriksen. “In the end, I was behind Ellen (van Dijk) and I said to her with one kilometre to go: ‘Ok Ellen, I’m on your wheel.’

"She put me in the perfect position. I was second or third coming into the last corner, and I opened my sprint from there.”

Advertisement
The opening stage of the Boels Rental Ladies Tour was controlled until the chaotic finale, with a lot of cornering within the final three kilometres stretching out the bunch and confining the potential winners to those right up the front of the peloton.

Dideriksen was meant lead-out her teammate Chantal Blaak, but when a technical finish disrupted the Boels Dolmans Cycling Team sprint train, Dideriksen embraced the opportunity to chase a personal result.

“We were planning to sprint for Chantal because there was no wind at all,” Dideriksen said. “We couldn’t do echelons or anything to split it, and with the team time trial tomorrow, we didn’t want to waste our energy today.”

Riding for Denmark at the Rio Olympics, Dideriksen was very solid in the women's omnium, stringing together a good series of results to finish in fifth place in the omnium.

“I was in good shape in Rio, and I tried to keep that shape,” she said. “I’m still training, and I hoped my form would be here. I got a little sick when I got home, so I didn’t know what to expect. I’m really happy I could win today.”

The pair had nearly five minutes on the peloton with 40 kilometres still to race.

The 103 kilometre stage was animated by a breakaway of two riders, Minke van Dongen (SwaboLadies) and Kasia Niewiadoma (Rabo-Liv) who rapidly rode out to a five minute advantage.

However, once the peloton began the chase the duo were brought back quickly and the catch was made ten kilometres from the finish.

The next stage of the five stage race will be a 26.4 kilometre team time trial that will go a long way to establishing the general classification pecking order as well as provide an insight into what to expect at the world championships team time trial in Qatar later in the year.

Boels-Dolmans convincingly won the longer team time-trial at the recent Vagarda event and will be confident of making it two wins from two here.

“It doesn’t matter if I keep the jersey or if I give it to one of my teammates,” said Dideriksen. “It only matters that it stays in the team. I came here to be one of the workers for the others, and that’s still my intention. The last stage will be really hard and suits some of my teammates better than me.”

Australian Loren Rowney (Orica-AIS) showed that she is in good form and may be in line for a potential World Championships call-up after she sprinted to fourth on the stage.