Brockie urges Jets to give Sheringham, Bridges a go 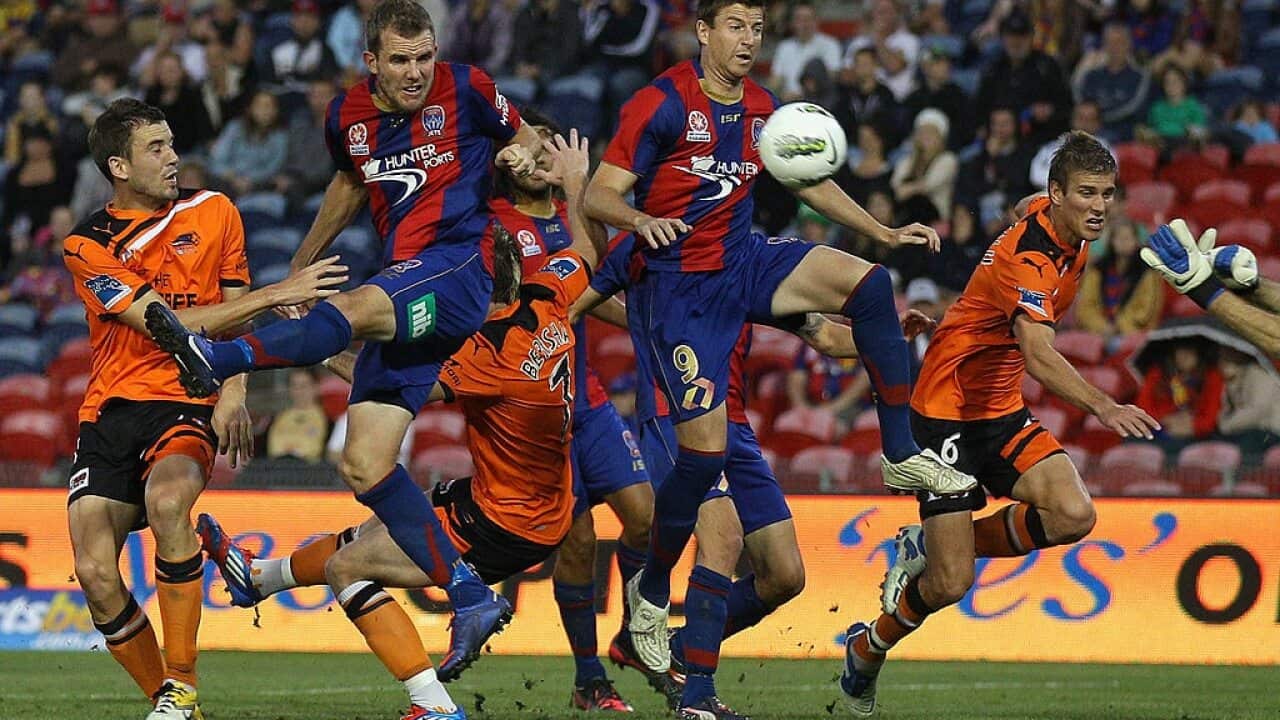 Jeremy Brockie and Michael Bridges in action for the Jets in 2012 Source: Getty Images AsiaPac

Experienced England international Sheringham and Jets hero Bridges have put their hand up to steer the coach-less club out of their predicament with three weeks left to the start of the A-League.

The Jets sacked head coach Scott Miller and his assistant Luciano Trani over a series of disagreements between the two and Sheringham and Bridges have emerged as a "double act" ticket for the two positions.

Advertisement
Sheringham would be head coach and Bridges his assistant.

It is believed the Jets have narrowed down the applications to six and chief executive Lawrie McKinna will start interviewing the candidates on Thursday.

Brockie, who scored 11 goals for the Jets in two seasons from 2010-2012, plays in the Premier League in South Africa for Pretoria club SuperSport United.

But he still follows the Jets and is disturbed by the negative publicity that has surrounding the club in recent years.

"I think Sheringham and Bridgey at the Jets is an exciting prospect," Brockie said from South Africa.

"I know Bridgey very well and I know the love he has for the Jets. And knowing him the way I do, he would be very saddened like a lot of us to see what has happened at the club not just recently but for a long time now.

"I think he will bring passion to the club and have the support of the fans.

"He obviously knows the league well. Add to that the experience of someone like Sheringham and what he could bring to the club and I think they would complement each other well and bring back the good times for the Jets.

"I still have a big piece of Newcastle inside of me so I follow the news very carefully and I hope, like I know the rest of the Newcastle Jets community will be hoping, that the club an get on the right track and not look back."

Brockie said he had full sympathy for the players and the fans who have had to endure grim and uncertain times for too long.

"I just feel very sorry for the fans of the club and the players," he said.

"The fans are very loyal and don't deserve to continue to have to wake up every morning and wonder if there's another bad situation going on.

"The players themselves, not far out from the season's start, have more weight put on their shoulders which is not needed.

"I don't know exactly what happened but I'm talking more about the repetition of having to start over and over again.

"I've got some great friends and Jets fans still in Newy and I'll live in Newcastle when I'm finished playing. Let's hope it's a stable club by that time."

Brockie, who played for New Zealand in the 2010 FIFA World Cup, joined SuperSport in early 2015 after a stint with Wellington Phoenix and is loving life in the Rainbow Nation.

"In the 18 months I've been here I've managed to win a major trophy named the Netbank Cup (South Africa's knockout). I also was named player of the year in the competition," he said.

"I've managed to score 28 goals in just over 50 games as well which always helps when you move to a new country and you're a striker.

"My family and I are very settled here and we love the lifestyle. It's cheap to live in, the people are football mad and very friendly. We are enjoying it so much that I've recently extended my stay for another four years."