Newcastle turn back the clock in epic performance

Revitalised Newcastle Jets confirmed their new found status as Sydney FC's most serious challengers for the A-League title with a stirring performance at Allianz Stadium. 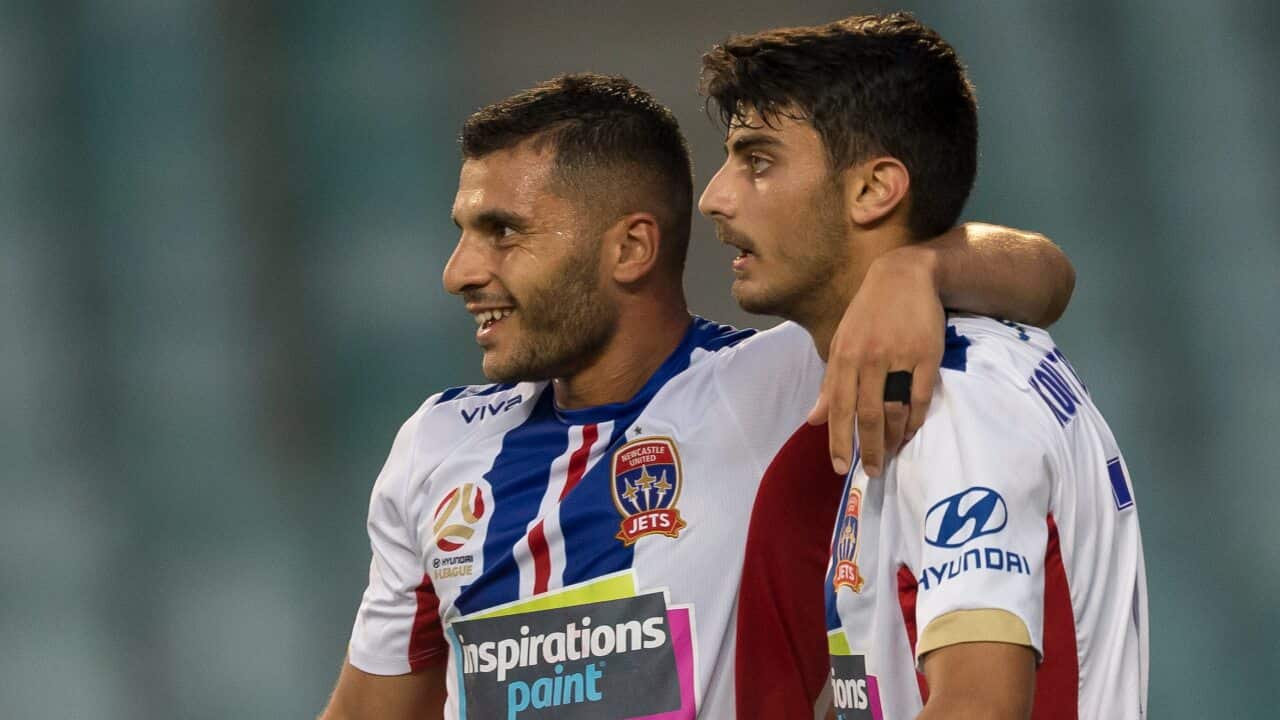 They are very much the competition's most improved side and they came within a whisker of beating the Sky Blues after a display that brought back memories of when they won the league on the same ground in 2008.

In the end the 2-2 draw kept Sydney eight points clear of the Jets at the halfway stage of the premiership and enabled them to set a record of 24 consecutive unbeaten home matches.

However the league leaders had to fall back on all their experience and expertise to survive the stiffest test they have had to face all season.

Advertisement
The Jets led twice and played well enough for most of the game to suggest that they are not only a most pleasant reality in the competition but a genuine force to be reckoned with.

And they did this with a heavily depleted side that was shorn of at least five regulars, among them suspended defender Nigel Boogaard and injured striker Roy O'Donovan.

Sydney must have been happy to snatch a point from such a difficult assignment against a fearless team that had them on the ropes for a long time in the first half.

The Jets defended diligently, kept their shape in midfield and used their speed up front to unsettle the home team's rearguard.

Only Milos Ninkovic's intervention when he ghosted past four defenders to score a peach of a goal reminiscent of Ricky Villa's famous strike for Tottenham Hotspur against Manchester City in the 1981 FA Cup final deprived them of taking a one-goal lead at half time from a potent header by Andrew Nabbout.

The Jets went ahead again with an opportunist goal from Joe Champness before Brazilian Bobo headed in Sydney's second equaliser from close range with three minutes left.

It was no more than the Sky Blues deserved but they must know that, after such a narrow escape, the Jets will be breathing down their necks for the rest of the competition.

Jets coach Ernie Merrick, who said he was "impressed" by the performance of his lesser experienced players, explained why they outplayed Sydney in the first half.

"Their fullbacks take risks and get forward and their midfielders come inside so we planned to negate that by playing counter-attacks very quickly down the flanks," he said.

Sydney coach Graham Arnold was generous in his praise for the Jets.

"You've got to give credit to Newcastle. They have pace up front and came with a plan to hit us on the break. After tonight and the way they played yeah," Arnold said when asked if the Jets were Sydney's strongest challengers for the title.

After such a thrilling performance against the best team in the league, the Jets can look forward to the rest of the campaign, particularly when they are able to field close to their full side.

Their recent seasons that were characterised by disappointment, frustration and off-field drama seemed a million miles away as both teams produced the sort of gripping contest that had the 18,000 crowd on the edge of their seats from start to finish.

The match between the league's top two teams lived up to all expectations and showed in a most clear way that although the game in Australia is beset with problems, controversy and mistrust between the clubs and Football Federation Australia, the coaches and players are doing their bit for the good of our game and should be commended.

The standard of play in the A-League is generally high and it's just a shame that crowds and viewers are down on recent years for reasons that are not too clear.

Poor marketing and promotion were seen as one of the main reasons for the fans' apathy.

Yet such matches as the Sydney versus Newcastle epic and a few others we have had this season are the best possible advertisements for the A-League and, you know what, they don't cost a cent.

The moral here is that if football's administrators may have taken their eyes off the ball and dropped it, the best teams in the competition have picked it up and showed the way towards winning back the fans' trust and respect.

Thankyou Sydney FC and Newcastle Jets for showing us that a light still flickers amid all the doom and gloom and refuses to be extinguished.