The Indian Pacific Wheel Race: Shaking it up on social media

Come 6:00am AWST this Saturday in the Western Australian port city of Fremantle, 70 or so cyclists will begin a race across Australia that has been described as "a life shaper" by Phil Liggett, and "the toughest cycle race ever staged in Australia" by SBS cycling expert Mike Tomalaris. 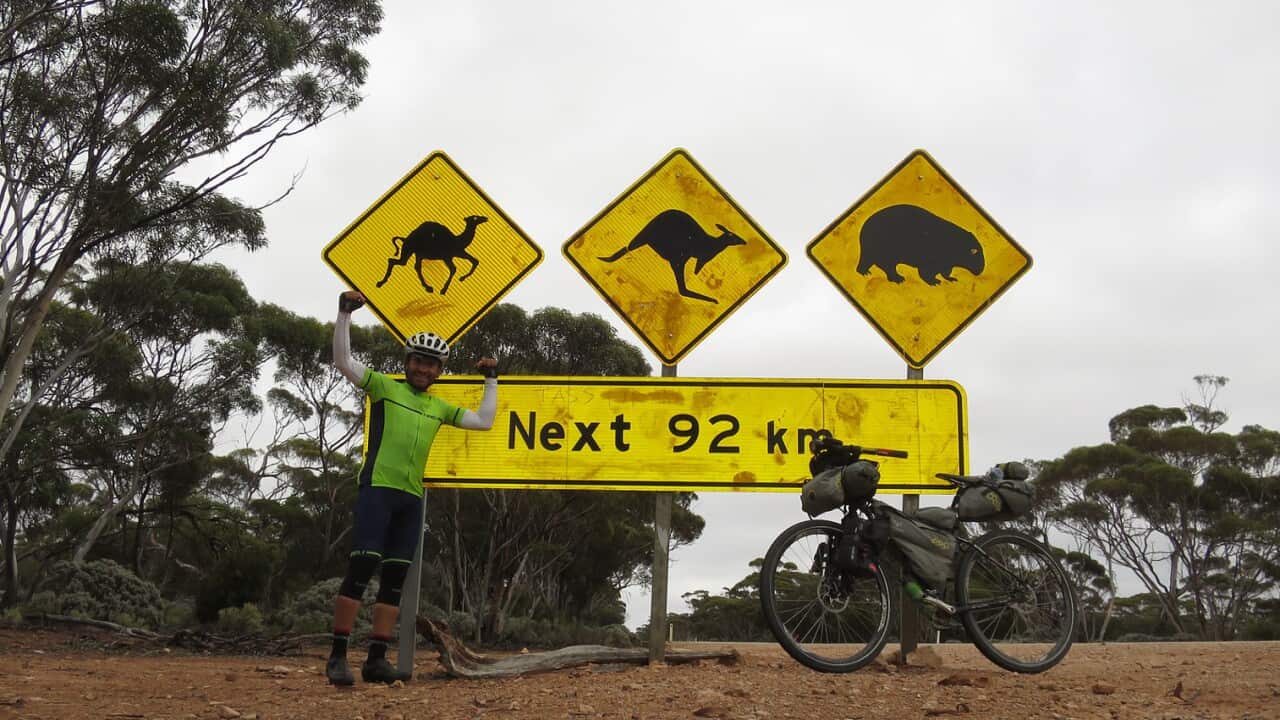 Riders will have to be ready for anything and everything on the 5,500 kilometre journey Source: Markus Stitz (Indian Pacific Wheel Race)

The enormity of this cycling challenge cannot be overstated. Nor should it be underestimated. The race is unsupported, and there are strict rules about self-sufficiency; no use of social media to call for help, and getting assistance not available to all riders is prohibited.

Many would regard the Indipac race as ‘crazy’. But, it is very difficult to look away.

Advertisement
At almost 5,500km and over 33,000m elevation gain across some of Australia’s most testing landscapes, the Indian Pacific Wheel Race is sure to impact the mind and body of every one of the entrants.

For the ‘Indipac’ riders there are no trophies or prize money, just the allure of personal rewards that come from a momentous two-wheeled adventure across the country. There is no way of predicting or measuring how significant those rewards will be. Though the size of the Indipac challenge is evident enough.

Rupert Guinness, one of Australia’s best cycling journalists and an Indipac entrant, knows what’s coming: "I think everyone is going to bottom out emotionally and psychology at many points during the race. And I’m interested to see how I’m going to handle that challenge."

"For most people after a few days it’s not so much about bike riding anymore. There are so many other elements that come into play. Riding it to be honest becomes the easy part after the first few days…which I think a lot of people will find hard." The Indipac is ultimately not about the bike.

Carlsson is one of Australia’s new guard of ‘overlanders’, a term that originated in reference to our pioneering distance riders of yesteryear. Few people today realise there was a golden era of Australian distance cycling where record after record fell from the late 1880s to the early 1980s.

Sadly, this golden century of distance cycling has nearly faded from public memory. Until now. Guinness sees the significance of this history: "Australia has a unique cycling culture through the early overlanders…one of the very rare cultures of cycling throughout the world…a huge story not just in sport, but also for Australia in terms of history and culture that deserves more awareness."

In those days, Australia was the long-distance cycling capital of the world. Historian Geoffrey Blainey once wrote that the desire to break cycling records "became almost a mania" in Australia. Down the years riders like Burston, Stokes, Richardson, Birtles, Nicholson, Opperman, Old and many others were feted as heroes by the print and broadcast media of the day. The public reacted accordingly, turning out in their thousands to cheer them during their journeys and at the finish line.

Fast forward to today, and from even a cursory glance at the interest and excitement growing around the Indian Pacific Wheel Race and you get the feeling this event could very well re-awaken public interest in Australian ultra-distance cycling. It is perhaps already happening with a number of recent distance and time record attempts on the track and road.

Indipac creator Jesse Carlsson has big plans around the event and is keen to bring a different level of engagement for those following the race from afar.

"That’s what we’re trying to do with this event," said Carlsson. "To cover it in a way that makes spectating easier. Part of the interesting thing is there are all these different parts of the puzzle there to spectate these races like social media, forums, Facebook pages, and the like, but they haven’t really been pulled together before or coordinated in any way."

"Where these races are fascinating is the race goes on for days and days, and it’s an evolving story over a two week period, so its like reading a book, you turn the page and you want to see what happens next. It’s almost like a real life Hunger Games."

Dan Wilkins, a social media expert with significant cycling ties, is in full agreement. "The power and place of social media is well entrenched in sports around the world. America sets the bar in this. But the power of social media for the Indipac is that we’re really trying to create a community. And we want people to contribute from within and all around the race."

Wilkins will be helping to curate Indipac ‘content’ from various social media sources and posting it regularly on the Curve YouTube channel, as well as the Indipac Facebook and Instagram accounts. They will also be posting daily updates each morning so that people can keep in touch with the race, and will be live streaming the race finish in Sydney.

Wilkins is excited about the social media coverage of the Indipac. "I really do think that this is a game changer. It doesn’t require the infrastructure that typical cycling events require. I definitely think this kind of adventure cycling travel is coming to the forefront."

Rupert Guinness, long-time cycling journalist for more traditional media formats, like print and television also sees the potential. He plans to record a vlog the same time every day and post it on Facebook when he can. "I want to have those honest memories for myself as well, and I think it is actually giving a direct portal for viewers that is something real not scripted or prepared. I want people to really engage in it. Even if I’m despair or tears I’ll do it. That’s my pledge. I want people to know it’s real."

Mark Ferguson aka the ‘Cycling Maven’ is another high profile Indipac entrant who will be posting his experiences on various social media. He also has plans for a race documentary and story updates along the way.

"We’re going to pick a few riders and follow their story and journey, because the most interesting part of this race is the people and their stories. We want to bring those stories out into the limelight."

The Indian Pacific Wheel Race is fascinating as an example of what the new guard of Aussie ‘overlanders’ are doing in creating bold new events. Recent evidence has shown that there is an appetite for ultra-endurance events and there is potential for the Indipac to become part of a wider resurgence and interest in the ultra-endurance scene.

The point that elevates the significance of this event is that there’ll be riders recording and sharing their Indipac race stories through social media. The increasing use of social media and related digital technology by the organisers, riders, and followers of cycling events like these is starting to shift how we watch and engage with such events.

The question of how digital technology is changing the pursuit of cycling and how social media is impacting how we watch and engage with cycling events are starting to attract greater attention. Some interesting examples of innovation already exist like the use of vine pages in the Tour de France, and the recent Amgen Tour of California’s use of Microsoft Band 2 fitness trackers and a data visualisation blog on rider data.

However, the Indian Pacific Wheel Race still looks like a unique player in this space. It is an example of a ‘grassroots’ ultra-endurance race that is taking very seriously the application of social media and related technologies to get rider stories out there every day of the race. If you believe the experts the Indipac is a potential game changer that other cycling media organisations should watch closely.

"I think that whole model is up for grabs now," said Wilkins. "We’re in an unprecedented age of access, and the second the athletes make the decision to broadcast their lives and experiences, the possibilities are endless.

Mark ‘Cycling Maven’ Ferguson also sees the innovation potential, not harnessed in other areas of the sport. "I feel very strongly about this topic. Let’s look at professional cycling. Yeah, they’ve got some helicopters in the air and the coverage is getting better in terms of the race, but we’ve had on-board cameras for ages…how has the pro-peloton not got onto this? Professional cycling is so slow in the uptake of this."

In the Indipac race across Australia, the race participants will be taking control of making and publishing their own stories about how this race is going for them. They will be riding and writing their own Indipac story.

The Indian Pacific Wheel Race could be a significant moment in Australian cycling. What better cycling race coverage can you get than the in-race words, emotions, images and sounds coming directly from the people who are actually riding it?

Hopefully the cycling world is watching.

Craig Fry is a Melbourne-based freelance cycling writer. He was a member of Team Pane e Acqua who won the 2014 Audax ‘Oppy’ All Day TTT National Shield by riding 730kms in 24hrs. You can find more of his work at http://www.pushbikewriter.com/