Melbourne City coach John van't Schip had a golden opportunity to add his weight to the debate surrounding diving in the A-League. But he fluffed it. 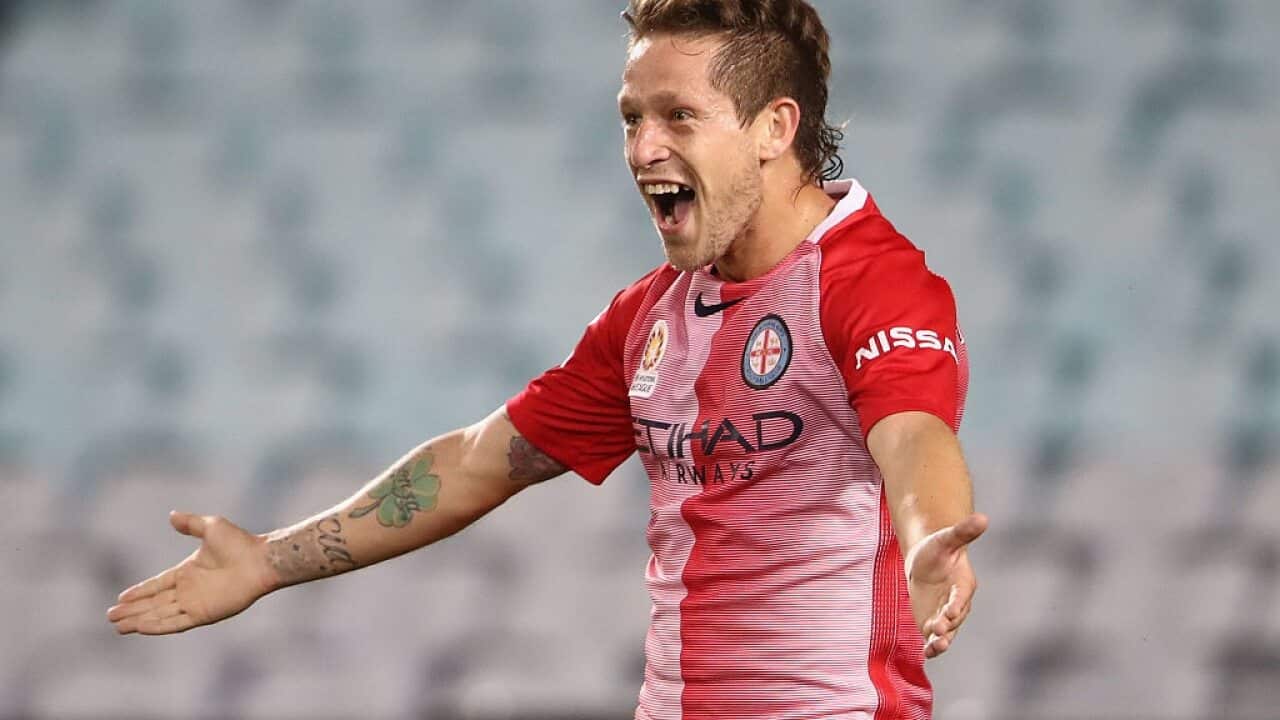 Melbourne City's Fernando Brandan has come under fire for play-acting during his side's 1-1 draw with Sydney FC Source: Getty Images

City's coach unwittingly illustrated how difficult it is to stamp out the latest scourge to hit the competition when he raised a few eyebrows in the aftermath of the tempestuous clash between his side and Sydney FC.

The hard-fought match at ANZ Stadium ended 1-1, which left the Sky Blues six points ahead of their rivals.

An ugly feature of an otherwise quality contest was another case of simulation to hit the league ... this time from City's Fernando Brandan, who scored the game's opening goal with a screamer in the first half that brought the house down.

Advertisement
The Argentine flier went down as if hit by a ton of bricks when challenged by Sydney's Rhyan Grant in pretty much the same way as Brisbane Roar's Jade North and City's Neil Kilkenny went down theatrically after almost similar altercations with City's Bruno Fornaroli and Adelaide United's Isaias in recent rounds.

The Brandan incident was met with howls of derision when it was shown on the big screen at ANZ.

These acts of simulation left a bad taste among viewers and van't Schip, who a week earlier berated North who "tried to get Bruno sent off", had a chance to strengthen his point by being equally critical of Brandan.

"That was touching, this time it was pushing ... there's a big difference," van't Schip said.

It should be remembered that you just cannot voluntarily put your hand to the face (or thereabouts) of an opponent and for van't Schip to suggest that a referee should distinguish between a touch, a push or a brush when trying to determine if a player is over-reacting is unrealistic.

When push comes to shove our game will be seen in a bad light if such theatrics become prevalent and go unpunished.

"Refs have to be consistent," he said.

But this has very little to do with referees. It's all about unethical behaviour from unscrupulous players trying to milk free kicks or get opponents sent off.

Football Federation Australia should recognise this by taking the initiative and maximising the use of technology, regardless of the referees' judgments, and come down hard on offenders.

It has been pointed out that this form of gamesmanship should not be allowed to infiltrate our game, essentially because in Australia we have a different sporting culture.

"It's a world game," protested van't Schip, sounding like he was trying to excuse the behaviour.

"You cannot change the game that is played all over the world. If you go to the World Cup and you look at Spain, Italy, South America and everywhere that is part of the game and that is why refs have to be consistent if they are to make good judgments.

"I understand it is not always easy. But over-reacting sometimes does not mean there was no foul.

"Again, this is part of football and there is no reason it has to be done differently because we are here in Australia. Referees have to step up and be more consistent."

Van't Schip, who like any other coach will defend his players, also suggested that City are paying the price for the perception being created in the media that his team is big on theatrics essentially because of City's considerable South American presence.

"Emotion plays a big part in football and I'm not saying we should be doing this kind of things, particularly when there is nothing happening," van't Schip said.

"Luis Suarez is a very good example and he is one of the best players in the world. He plays with passion and emotion and these things happen.

"We've been talking about Bruno for a few weeks now and he does not get any free kicks anymore."

Clearly this simulation business is becoming a problem that could cause our game serious damage if not eliminated before it gets out of control.

Amazingly, there are still some people who contend that play-acting is not a major issue.