The Olympic Games Has Always Been Ellia Green's Destiny

Previous Next Show Grid
Previous Next Hide Grid
Image 1/
Video
Audio
All kids dream of going to the Olympics when they grow up but only for a special few does this dream become a reality.
By
Jill Scanlon

Ellia Green is one of those special few -- but her reality has taken shape in a way she never imagined in the years spent sprinting on a straight track from the tender age of eight.

Despite being assured by her coach that she had every chance of going to Rio as a sprinter as far back as 2012, Ellia decided to throw fate to the wind when an unlikely opportunity was presented to her from an even more unlikely source.

As it has turned out, her destiny seems to have always been to compete at the 2016 Olympics in Rio de Janeiro.

The story, which Ellia has related many times now as her athletic profile has risen, is that she drove her cousin to a Rugby Sevens talent identification day in the south-eastern suburbs of Melbourne. While initially reluctant to take part, Ellia was eventually encouraged to just ‘have a go’ at the basic drills and testing and by the end of the session was being asked to make a trip to Canberra to train with the main group – and the rest, as they say, is history.

Green admits she still looks back on her decision as surprising but with the greatest support and advice coming from her mother, with whom she shares a very close relationship, she grabbed the chance to try something different.

“My mum has played such a huge part in my life with sport and athletics. She’s watched every race I’ve run; she’s been hard on me but for all the right reasons. She said to me ‘it’s because you’re talented and they’re giving you this opportunity -- you should take it. I think you’ll be a great player and you should just try it and if you fail then you know that you can be a sprinter anyway.’ “

Having spent ten years absorbed in a solitary sport creates particular relationships and training environments, so when the big step into the unknown of pursuing a new sporting pathway involves leaving your family and moving interstate at the age of 18, joining a squad of 20 other women and training in a team environment -- your world is bound to feel slightly rocked.

“With sprinting, you’re so close with your coach. With an athletics coach, you have to be their best mate, they’re your mentor, they go everywhere with you; it’s you and him and that’s the way it was with me and my coach."

"So when I decided to go on this rugby camp, (even) all the coaches and managers of rugby couldn’t understand that I was leaving a career that I’d been working for my whole life -- but you know, with any sport you take your gamble,” Green said, with a philosophical lilt that belies her 22 years.

She knows her experience in going from sprinting to rugby and all the changes that involved has given her an insight which now enables her -- some four years later -- to be there for the new young recruits coming into the Women’s Australian Sevens squad.

“In the beginning I was one of the babies in the team. I know exactly how daunting it was coming to a team sport; coming from track and field where you train by yourself every day; but then coming into a team environment -- it’s not easy. So whenever we get a young girl or a new girl, I make sure that I make friends with her and make her feel as welcome as possible because I know how daunting it is myself,” she said.

Ellia is now a core member in the Women’s Sevens squad which became the first Australian team to qualify for the 2016 Olympics last May at the conclusion of the 2014/2015 Women’s World Series.

Why did Aussie Sevens coach Tim Walsh choose these 12 players for Rio?
Coach of the Women's Aussie 7s Tim Walsh says that he made the Olympic selection by virtue of the player's experience.
The Aussie Sevens are challenging perceptions says coach Tim Walsh
The Wallabies' two World Cup wins have long stood as Australia's proudest achievements in rugby, but the nation's dominant women's sevens team hope to set a new benchmark by winning gold at the Rio de Janeiro Olympics.

Since then, there have been two major goals set by the coach, Tim Walsh: win the current World Series and then take gold in Rio – in a nutshell, to dominate Women’s Rugby.

Already sitting number one in the world rankings following an outstanding start to the season taking the title in Dubai in December, Green says the team is not resting on its laurels.

One of the attractive things about this team is that it’s not always about the rugby all the time. This group has all the hallmarks of a close-knit family with a diversity of personalities and lifestyles to which Green adds her vibrancy and fun spirit.

Who's the funniest @Aussie7s women's player?

Ellia Green’s Fijian heritage is something many would assume has given her a natural impetus to pursue her rugby pathway and she herself agrees that it’s curious and may well be in her blood to have ended up where she is. But while Fijian by birth, Ellia has no other connection with the Pacific nation, having been adopted then raised in Australia by her Polish mother and English father.

“I was adopted from day one in Fiji. My mum believes that we were destined to be together. I think the opportunities she has given me in life -- it has been a blessing. I wouldn’t be where I’m at, I don’t know if I would be even playing rugby: I don’t know if I was in Fiji what would’ve happened,” she said, but admits to looking up to the Fijian players now that she does play rugby.

“A lot of my rugby idols are in the Fijian Men’s team. I love the unpredictable way they play and I would say I have some of the athletic abilities that the Fijians have,” she said with a laugh, although there is no doubt Green’s own athletic prowess is to be admired.

One to Watch: @aussie7s Ellia Green is set to light up the #SaoPaulo7s - Is @GeezyGreen one of the best out there?https://t.co/5UQIzisPam

Green’s special relationship with her mother is something she recently decided to share, with the support of her teammates, as she made public her mother’s battle with cancer through a laudable  initiative -- a sporting calendar featuring the whole Australia Women’s squad raising money for the Anti-Cancer Council of Australia.

“It means just so much!” she said.

“It’s not just for me. I know a lot of the girls have gone through it with a family member with cancer, so to even just support the cause and the Cancer Council means a lot to our team,” adding that her mum is in recovery and doing well and has her ticket for Rio all booked. 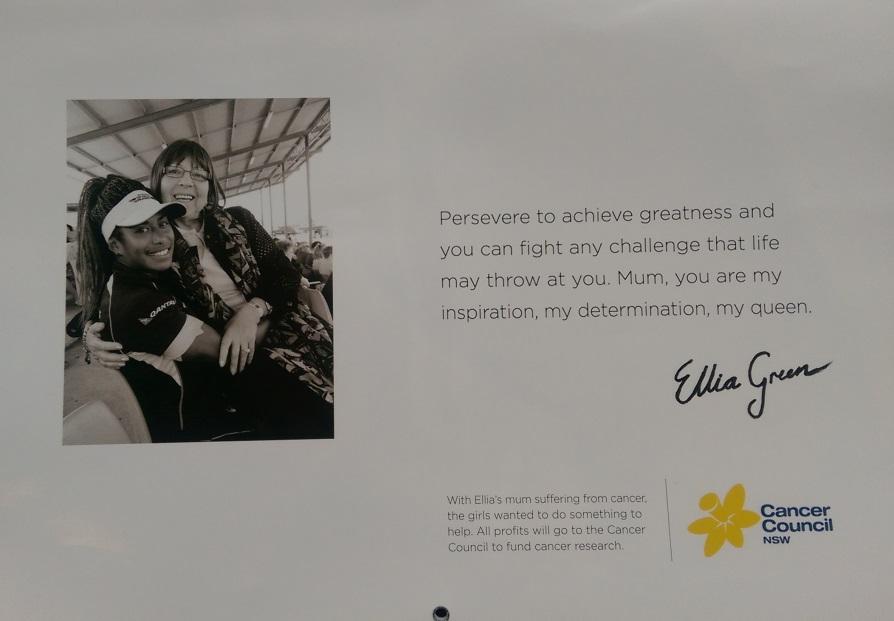 The Australian women’s team is riding high out of the success in Dubai, and while their traditional rivals, New Zealand and Canada, stumbled at the first hurdle of the season, Green is fully aware that will not be the case as the season progresses.  But she does sound a note of caution as the gap has been closing over the past year between the traditional top three (New Zealand, Australia and Canada) and the other core nations on the women’s circuit.

“I think Russia is a huge one. They are incredibly strong. They are one team that is completely unpredictable -- when they’re hot, they’re hot. They just don’t stop working. But even Fiji -- Fiji have really come out: their fitness is getting better, their skills are getting better (and) by the time the Olympics comes, I really do think it’s going to be anyone’s game,” she said.

So following the successful reception from the home crowd at the Sydney Sevens earlier this month, the second round in Sao Paulo this weekend is being looked to with great anticipation and there is no doubt that Ellia Green will be right in the mix over the two days of competition as all teams look to make a move up the rankings and unseat the formidable Australian unit.

The Aussies of course will be looking to replicate the success of Dubai with Green always in contention for more success although she will have to work hard to top Dubai, where she came away from the opening tournament having scored her 50th Try in World Rugby, was named in the Dubai Dream Team and also claimed the Player of the Final award!

One of the happiest moments in my life
We did it #aussiesevens @ Dubai, United Arab… https://t.co/H46l2uXsLj