Winds of Change: Did Hayley Matthews WBBL stint lead to Australia’s defeat in the World Cup

Previous Next Show Grid
Previous Next Hide Grid
Image 1/
Video
Audio
The Women’s Big Bash League has been a significant step for cricket in Australia. But has it's success had the unintended consequence of helping out other nations?
By
Elizabeth Fitzgerald

After West Indian teenager Hayley Matthews smashed 66 runs in the World Cup final to help her side to victory, there has been talk about how much her time in the Women's Big Bash League (WBBL) in Australia helped her preparation.

Matthews was one of a host of international players who joined a WBBL side in the inaugural year of competition. Since the World Cup she and her captain Stafanie Taylor, also a WBBL player, have suggested that the time in Australia really improved her game.


Certainly it’s likely that playing more matches and being exposed to players from around the world prior to going up against them in the World Cup would have some benefit to all those that were part of the WBBL01.

But how much of an effect did it really have? How much did performances in the inaugural domestic competition foreshadow what was to come in the World Cup?

To help answer this question we can take a look at some of the statistics for the international recruits into the WBBL01. First, we can look at their international Twenty20 stats before the start of the WBBL01. Then we can see how they travelled during the domestic season and finally, how they performed on the world stage in India. Given Matthews’ match winning knock, let’s focus on batting averages. 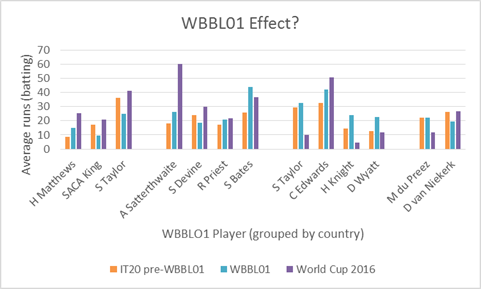 We can see that Matthews was clearly on an upwards trajectory. Her batting average before the WBBL01 (when she had played only 10 international T20 matches) was just 8.66.

Gaining confidence and experience during the WBBL01, her average jumped to 15 during her stint for the Hobart Hurricanes. During the World Cup, she managed to average a very impressive 25.5.

Matthews is a relatively young and inexperienced player and so it is probably reasonable to expect that the more games she plays, the better she will get.

What about the more experienced players? How did they fare?

We might expect that internationally capped players would dominate in the WBBL01 as they come up against a range of players including those that have never made national selection before.

We might also then expect these players to go on and have a good World Cup, partly due to the increased opportunities arising from WBBL01. This was the case for some, like veterans Charlotte Edwards and Amy Satterthwaite, but across the board we in fact get a diverse range of experiences.

Thanks to everyone for all their messages of support...off to Delhi ✈️ #semifinals #WT20 pic.twitter.com/kAci6ybTgs

Some players, such as Dane van Niekerk and Stafanie Taylor, actually saw a drop off in performance in the WBBL01 but then an improved World Cup average.

Others, like experienced players Sarah Taylor and Mignon du Preez, had a good WBBL01 season but then had a very disappointing World Cup campaign.

It is clear that whilst experience in a domestic T20 competition may be helpful, it is no guarantee of success.

Although Matthews seems to have benefited from her time with the Hurricanes, we must also acknowledge that it is up to the individual player on the day to make the most of their opportunities.

The WBBL provides a new and significant step in the pathway for our elite cricketers, and the more exposure and match time it can provide for players, the better. But we must remember that lots of other factors come into a successful international campaign.

Cricketers with much more experience than Matthews could not hold their nerve during the World Cup. Matthews is to be congratulated, for grabbing the opportunity with both hands when it mattered.

Any Hurricanes fans who were wondering why their side recruited a young and relatively obscure player will now be left in no doubt, and will be hoping Matthews is re-signed for what is sure to be an exciting WBBL02.

She certainly has a huge future ahead of her.