Exclusive: An SBS Chinese investigation has revealed significant differences in the boy-to-girl birth ratio among Chinese migrants in Australia from 2003 to 2019. Experts believe this disparity shines a light on the prevalence of gender selection within this community. They estimate there were around 3730 "missing" female births during this period in families with at least one parent born in China.

Data gathered by the Australian Bureau of Statistics at the request of SBS Chinese has found that there was an average birth ratio of 109 boys for every 100 girls from 2003 to 2019 among migrants from mainland China in Australia.

This ratio, taken from 215,775 births, was higher than the ratio for all Australian births, which sat at 105.7 boys for every 100 girls for the same period.

The data measured the number of male births compared to females from one or two parents from mainland China.

The standard biological sex ratio at birth internationally is between 104 and 106 boys per 100 girls, according to the United Nations State of the World Population Report, which states that any number above or below 105 suggests that gender selection is taking place.

The differences in ratios highlighted by the ABS statistics are “statistically significant” and suggest that gender selection favouring boys is a practice being used by this community in Australia, according to demographer Christophe Guilmoto who co-authored the United Nations Population Fund’s (UNFPA) report into sex selection in Asia. 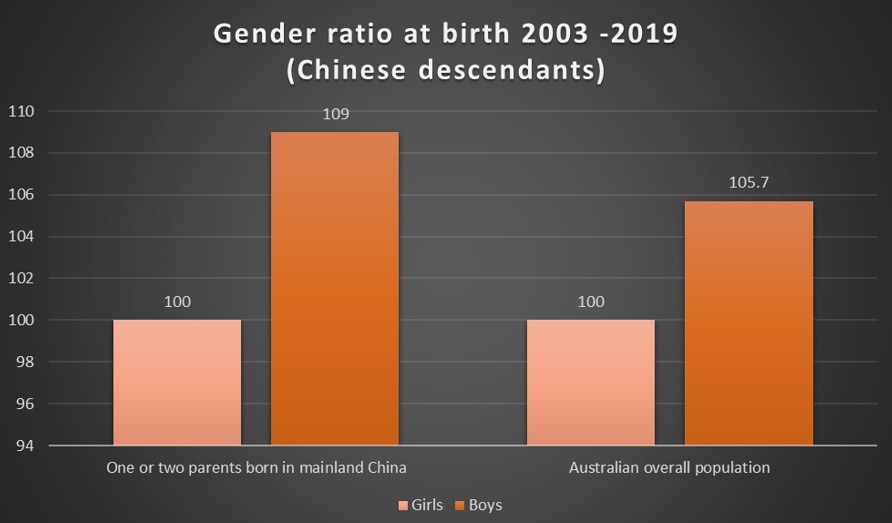 “We can safely assert that sex imbalances at birth are present among this immigrant population," Dr Guilmoto tells SBS Chinese.

“Australia registered 3730 missing female births during 2003-2019 in families with at least one parent born in China." 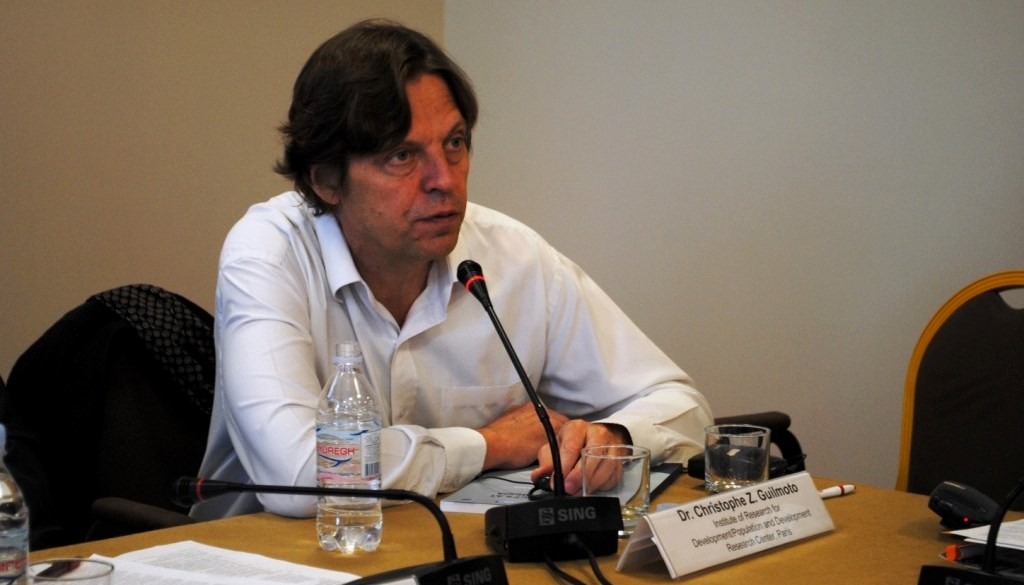 It's a view shared by Associate Professor Gour Dasvarma, an expert in population studies at Flinders University.

“A sex ratio at birth (SRB) of 109 is certainly higher than the normal range observed all around the world.”

Prof Dasvarma’s analysis of the data concluded that a 109-ratio based on a total number of 215,775 births "provides strong evidence that prenatal sex selection may be taking place following migration to Australia”.

How are people selecting gender?

There are numerous ways to select the gender of a baby.

While IVF is one practice used by this cohort, "sex-selective abortions" are more common among members of the Chinese community in Australia, Dr Guilmoto says.

“Sex-selective abortions are used to ensure the birth of a male heir, in keeping with what is observed in mainland China," he says. 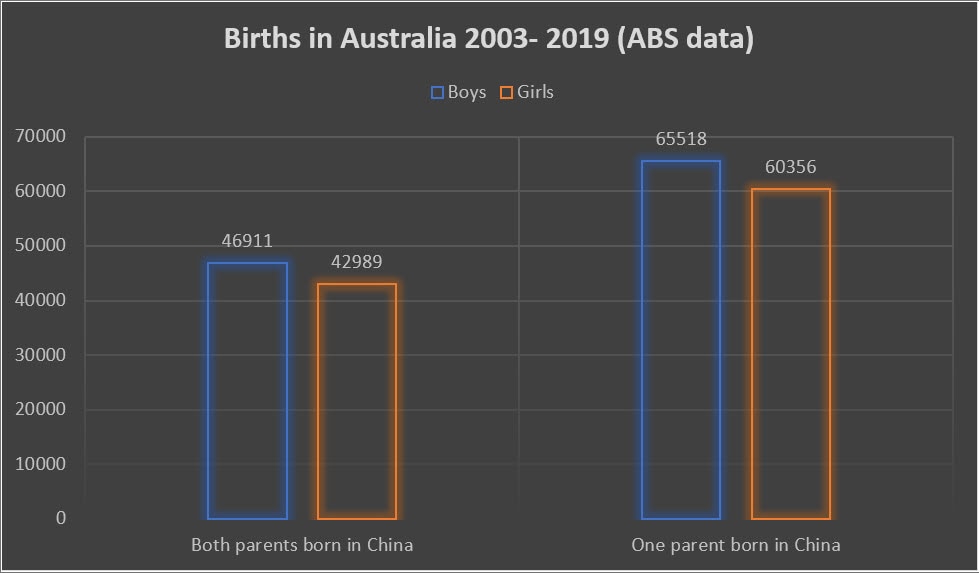 Although terminating a pregnancy due to gender is prohibited in Australia, individuals can opt for an abortion during the very early stages of pregnancy with the help of non-invasive prenatal testing that determines the sex and potential genetic anomalies in babies.

By knowing the gender of the baby at a stage when it’s relatively easy to get an abortion, families can choose to terminate the pregnancy, arguing different reasons.

Dr Kumar*, an Australian GP who has requested anonymity, says she has identified a pattern in couples who report a miscarriage after finding out the gender of their baby.

She explains that she's seen couples who have had a gender test for their child, before returning to the clinic after a period of time, pregnant with a baby of another gender.

She says they would often explain that they had a miscarriage and then got pregnant again.

Dr Kumar says patients don’t often admit to their GP about the termination and would explain that they had experienced a miscarriage to "avoid any suspicion that gender selection had taken place". 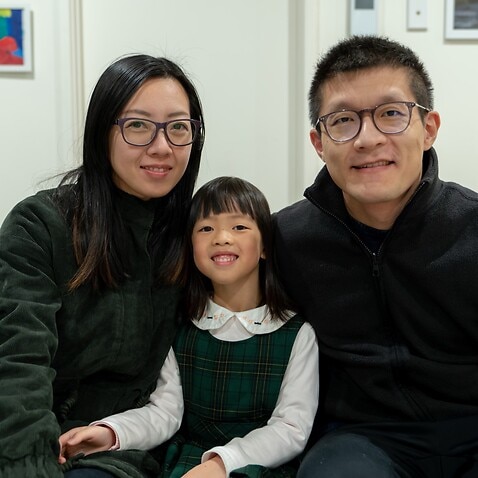 In Australia, Chinese parents are trying to tackle the fall in mother tongue literacy

The legal and ethical concerns about gender selection don't apply when it's performed for medical reasons.

Prohibited, but widespread in China

While gender selection is illegal in mainland China, the practice still occurs.

Statistics suggest that China’s sex ratio at birth is still imbalanced after decades of government policies to try to address the issue, and since the 1986 Notice on Prohibition of Arbitrary Foetal Sex Determination jointly issued by the Ministry of Health and the National Family Planning Commission of China.

What was initially an issue in several provinces, has spread to cover the entire country, and from rural to urban areas.

"Among China’s 32 provinces, 19 had normal sex ratios at birth in 1982, while only one did in 2015," according to a report issued in 2021 by the China Population and Development Research Centre, that analyses the history of skewed ratios in China. China introduced a three-child policy in 2021 to alleviate problems relating to the ageing population.
LightRocket

Another report by the Carolina Population Centre estimated that “the one-child policy resulted in about seven extra boys per 100 girls for the 1991–2005 birth cohorts”.

However, the China Population and Development Research Centre report identifies a positive trend in the normalisation of the sex ratio at birth but suggests that gender selection is still taking place.

Some of the challenges, identified in the report, are “the disparities in regional development in China”, the “historical traditional of patriarchy”, and “the advancement of technology that makes gender-biased sex selection much easier to accomplish and more difficult to detect”.

According to the UNFPA, the occurrence of gender selection in some parts of the world, including India and China, is "alarming" as it reflects the persistent low status of women and girls.

This body suggests that wherever gender selection against girls occurs, it reinforces stereotypical patriarchal values that devalue females. 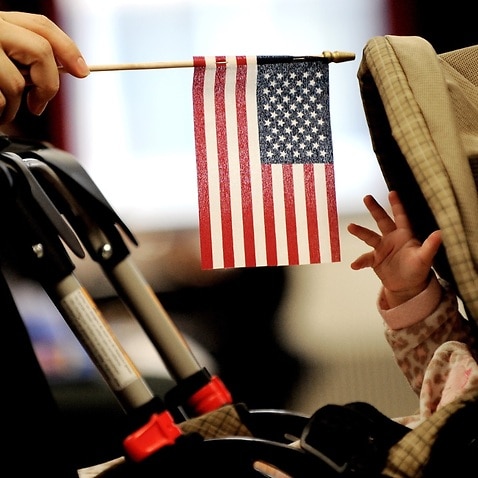 Birthright citizenship: How a Chinese couple paid for a US birth

The United Nations says the preference for boys in some areas of the world is seen as a symptom of gender inequality, which is present in many other countries, including India, Pakistan, Vietnam, South Korea, Azerbaijan, Armenia, Georgia, Albania and Montenegro.

“Those in favour of using IVF for non-medical sex selection tend to agree that the sex ratio disparities now occurring in these countries are undesirable and that action needs to be taken to correct this," says Professor Ainsley Newson, a bioethicist at the University of Sydney.

Prof Newson believes that while the discussion on IVF and gender selection mainly focus on other countries, not exploring the practices in Australia overlooks the issue that allowing sex selection has a demographic impact both nationally and internationally. 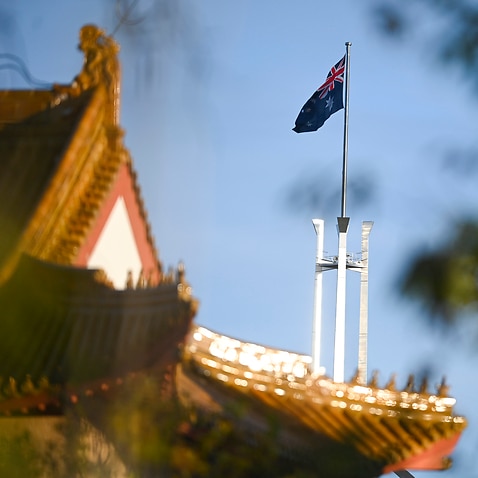 Australia-China relations: How we got to where we are today

Preferences for sons in some Chinese families

Dr Pan Wang, a senior lecturer in Chinese and Asian studies at the University of New South Wales, says that in Chinese culture sons are seen to be able to carry on the family line, namely, the surname of the father.

"Gender selection in rural China is much more common than in urban areas as patriarchal culture remains strong in the remote areas; especially in rural China, they will keep bearing children until they have a son," Dr Wang says.

“Having a son is seen by some people as their filial obligations because sons are seen to be able to carry the family line, they are physically stronger and can help with agricultural production and other labour work, which contribute to the economic prosperity of the rural households.”

Dr Wang says the practice is less prevalent among the younger generation and in urban China, due to education and the "booming costs of ‘bride price’, which has placed a lot of burden on parents who have sons”.

Daughters also play an increasingly significant role in taking care of their aged parents compared to the past, especially given the increased social and financial status of women.

Dr Kong says that from her experiences, when Chinese couples find out that the gender of their baby is not what they wanted, "most feel disappointed", but they are still pleased about the pregnancy.

Melbourne-based gynaecologist and fertility specialist Dr Alice Huang says she “seldom sees disappointment” when couples are told the gender of their baby.

"There may be momentary regret but very soon I see the joy I always see in expecting parents.”

Dr Seng-Chai Chua, a gynaecologist and Obstetrician at Westmead Private Hospital in Sydney says that while there is “pressure to have a boy” within Chinese families, this is less likely among skilled migrants in Australia due to their level of education, and also because they are not living with their parents, who may still reside in mainland China and hold differing views.

The impact on mental health

Psychologist Mr Noris Ma says the feeling of disappointment over an "un-prefered birth" is felt among some Chinese migrants in Australia, especially those who hail from rural China.

However, he says couples born in urban China during the 1970s and 1980s experience less pressure.

Mr Ma says the pressure and regret not only exists in the pre-conception period but also after giving birth, and in most cases relates to the birth of a girl.

If there is a choice, they are more eager to have a baby boy.

Gender expectations can have long-lasting consequences on the resulting child, he says.

“Children usually don’t understand that their Chinese grandparents have gender biases until they are teenagers. Once they realise this, they lose the feeling of being loved,” he says.

“Older relatives will rarely express their disappointment directly. Rather, they make comparisons indirectly.

"For example, they will tell a mother who gives birth to a girl, that one of their relatives has just given birth to a boy. The mother will therefore feel that they have let down their family."

The impact of gender selection on children is a concern of many professionals in the community.

Ms Ada Poon, a Melbourne-based Chinese counsellor and mental health social worker, says that people from the Chinese communities are more eager to find out the gender of the babies, even for the firstborn.

She's concerned about the pressure placed on girls who reported behaviours in their grandparents to family members who have boys.

In order to make their families proud of them, the girls in the family would often push themselves to become outstanding, mostly in academic results.

Patriarchal values behind gender preference can break down marriages, Ms Poon reports, adding it can even affect custody arrangements for children when separation takes place.

“In many divorce cases, the males usually do not care about custody of the daughter," she observed, “but custody becomes important when the child is a boy because he is the family’s asset".

Technology has made it easier for couples around the world to choose the gender of their babies, whether it’s through IVF procedures or sex-selective abortion after early gender identification.

In July 2021, SBS Chinese will bring you the second part of this investigation that explores the international business market of gender selection through IVF, and how it operates in Australia, where the practice is illegal.

If you have a story about gender selection, contact SBS Chinese sbsinvestigates@protonmail.com. If you want to keep your anonymity, send the email from a Protonmail account.