Artist Xiaoping Zhou came across Aboriginal art for the first time in 1988. It sparked what has ended up being his life obsession.

Sitting down with SBS Mandarin, Chinese-Australian artist Xiaoping Zhou expressed with pride what Aboriginal culture meant to him.

“What are the lands to us urban dwellers? Something to buy, sell, use or invest in,” he said. “What are they to the Aboriginals? It’s their life.”

Hanging on the wall directly behind him was an oil artwork called 'Painting on the Land', which shows how the "co-existing relationship among humans, land and spirit” was represented by the red rock and the clean pond on a borderless land.

The artworks which hang at his studio offered a glimpse into the past 30 years of the Chinese-born artist's life, which have been spent diligently devoted to Australia's First Peoples. 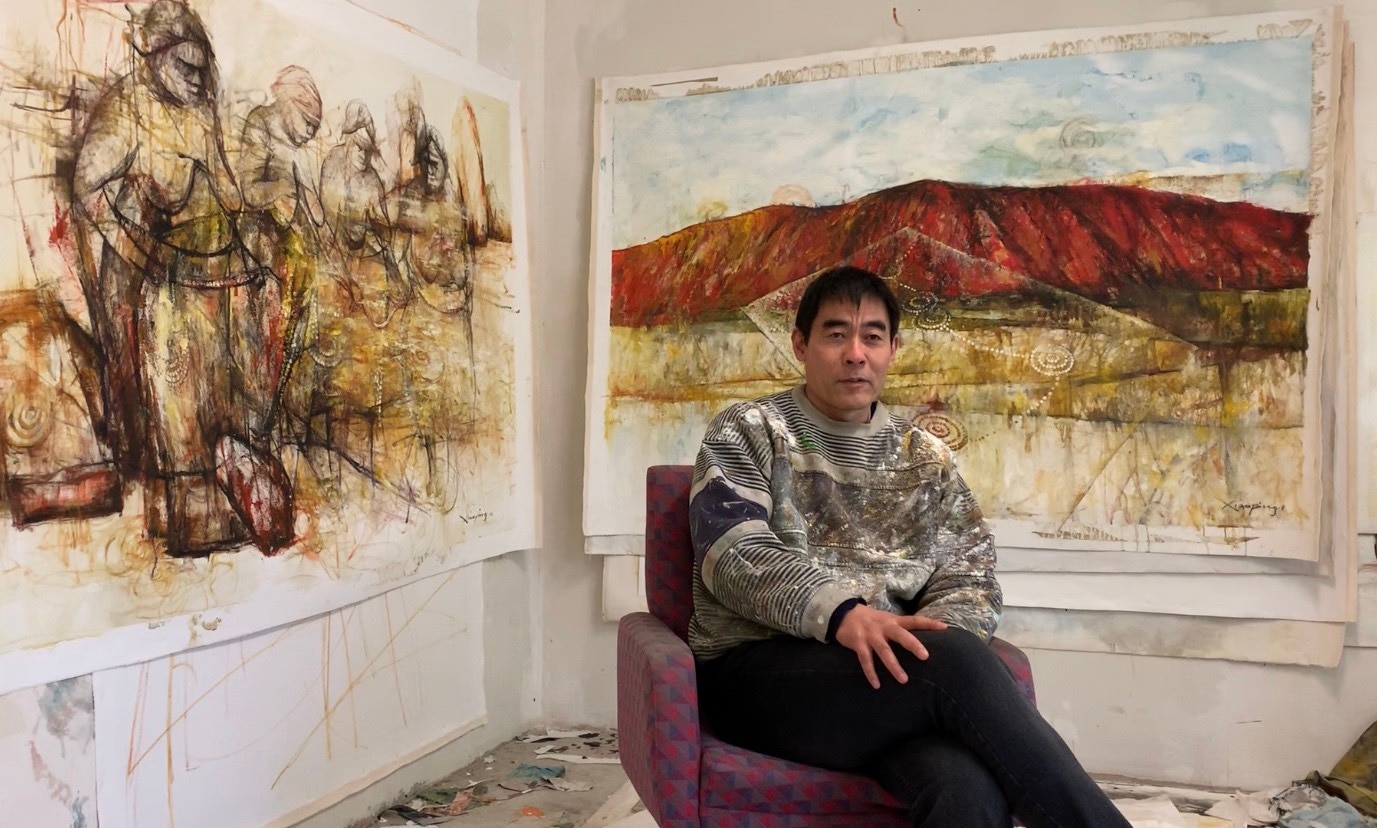 Xiaoping Zhou in front of his piece 'Painting on the Land'.
SBS Mandarin/ Helen Chen

A rendezvous in Alice Springs

Mr Zhou's first trip to Australia in 1988 was also his first time travelling outside of his home country.

After setting foot in Melbourne, he stopped in Alice Springs en route to Darwin.

It was there where he was first inspired by Aboriginal art.

He went to meet the local land council, and to his surprise, he found that they were more interested in him than he was in them. Asian tourists were a rarity in central Australia at that time. 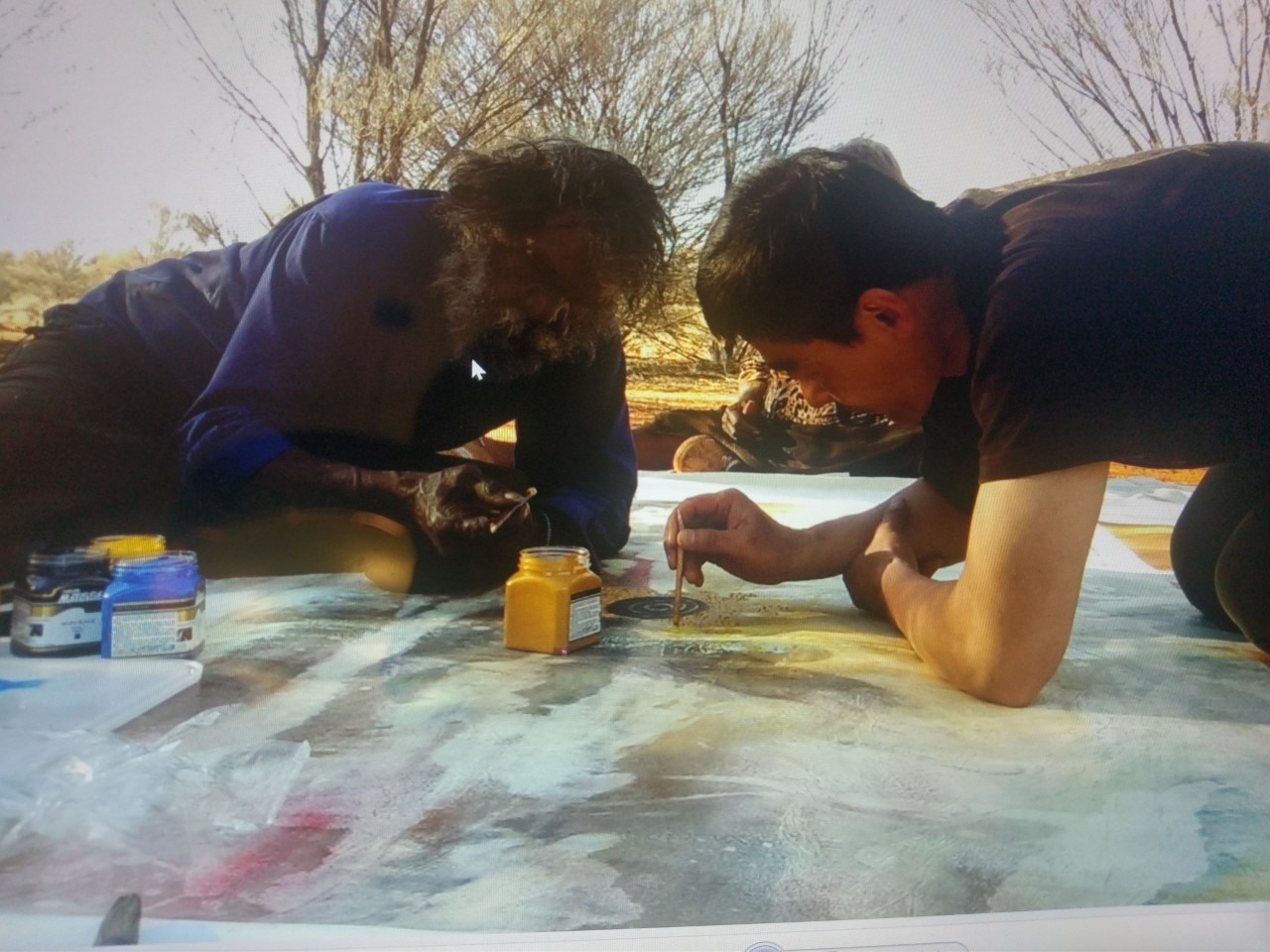 Following a suggestion from the land council, he then decided to venture into parts unknown to him - deep into Arnhem Land.

Since that first visit, he has been to numerous Aboriginal communities in the Northern Territory and Western Australia. That first visit kick-started his 30-year fascination with incorporating Aboriginal artwork into his own.

One of the most important artistic influences and partners Mr Zhou had during those early years was Aboriginal artist Jimmy Pike.

Their work gave birth to a series of artworks that were exhibited in China in 1996. Those were among the first Aboriginal artworks introduced to that country.

The story of how the two men met was an interesting one.

During the early '90s when Mr Zhou was again travelling around Australia, he was asked by the locals in Broome: “Do you know Jimmy Pike? You have to meet him.”

It turned out, at that very moment, Mr Pike was locked in a jail cell. Mr Pike's wife arranged a meeting for her husband with Mr Zhou.

The two met in Broome the following year, and thus the friendship began. "We lived together under a big tree - that was Jimmy’s home," Mr Zhou said.

He recalls how they ate, lived and walked the desert together and learnt to survive.

They even enjoyed time painting together, back to back.

The land they stood on was what they drew. However, what they saw and comprehended was totally different, due to their distinct cultural backgrounds and personal experiences.

“I’m trying to grab how the Aboriginal artist and myself understand the same land." These artworks created under the big tree went on exhibition in 1996 in Zhou’s hometown city Hefei, in China's  Anhui Province.

Not long after that, the National Art Museum of China exhibited them as well. More Aboriginal art forms like photography, dance and music were gradually introduced and well received in China.

In 2017, Mr Zhou held his 'Back to the Land' exhibition in Chengdu whilst NAIDOC Week was being promoted in China. His works received a great response from Aboriginal communities in Australia.

He recalled that at that time, a Facebook post exhibiting his artworks received positive comments from Aboriginal people all over Australia.

“They were proud of themselves. Their culture is celebrated by people in other countries.”

From the image to the spirit

“30 years ago what I drew is what I saw, while now what I draw is what I feel,” Mr Zhou said, as he moved around his studio pointing at his recent artworks.

“This one is called ‘Painting on the Land’. It means the form of art is closely connected to the land. People live on this land, therefore they cannot be separated from the land.” Another piece, created in 2016 and called 'Earth', depicted a dynamic moment in a ceremony.

“The people, the earth and the landscape can be seen through that. Humans are bound together with the land and spirit - inseparable.” 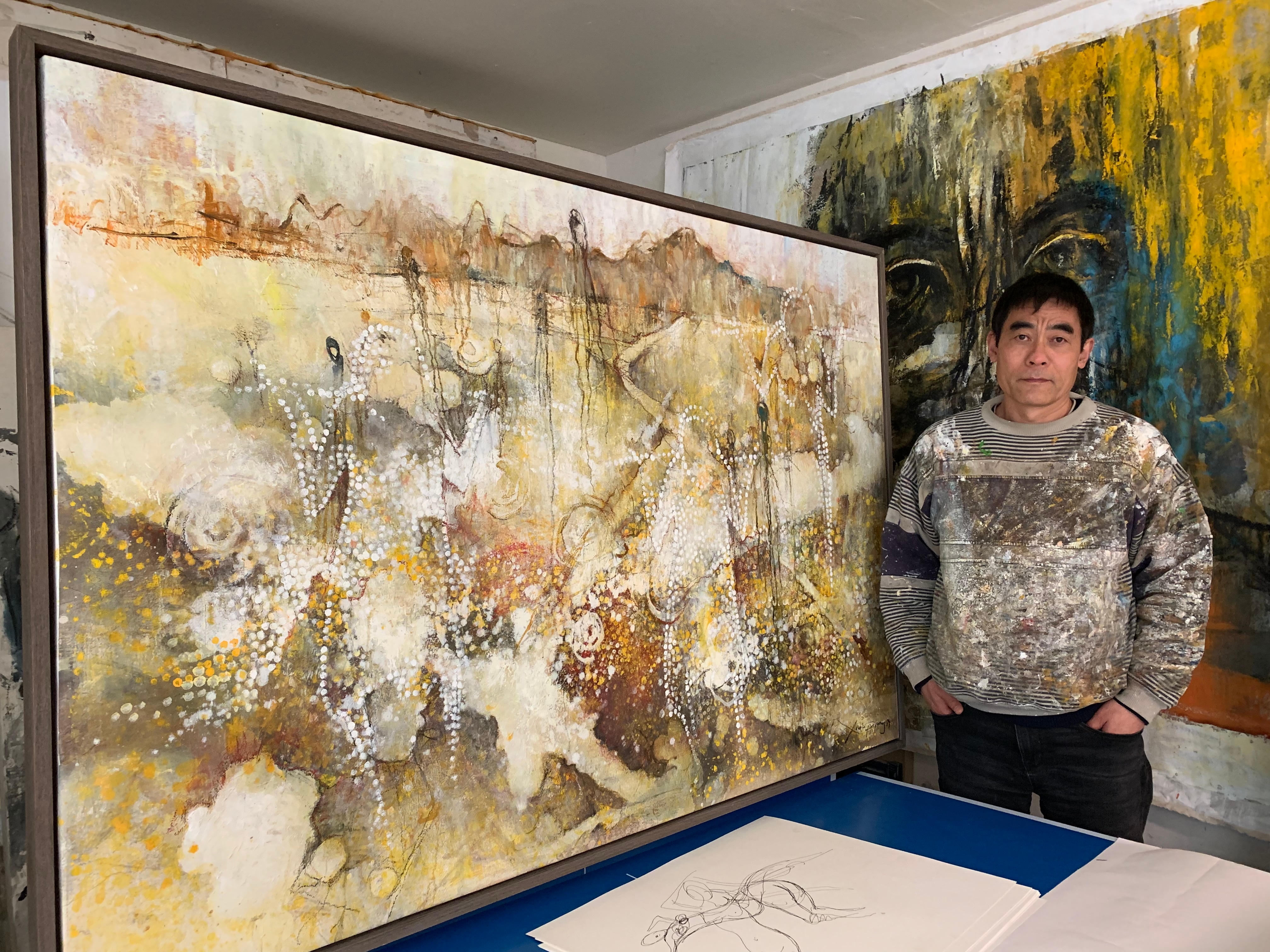 He said these works were significantly different from those he created 30 years ago when he focused on physical appearances.

He said the version of himself in 2019 was not curious or shocked by the Aboriginal culture. Instead, he understood them like he was born as one of them.

And because of that, Mr Zhou said Australian society needed to gain a greater understanding of Aboriginal people.

“A lot of questions that they've got regarding the Aboriginal people are quite superficial, such as how do they live and what’s their diet like. It takes time to get people deeper into Aboriginal culture.”

He wants mainstream Australia to work harder in order to promote greater social cohesion: “They need to tell everyone how outstanding this culture is."

He admitted that certain protections within Aboriginal culture had caused some unexpected side-effects: “We know that according to their tradition, everything related to the deceased, such as their art, writing, names or portraits should be removed after they passed away. Things like the exhibition are not allowed.”

“This is the over protection because the Aboriginal people themselves are not sticking to the tradition any more.” 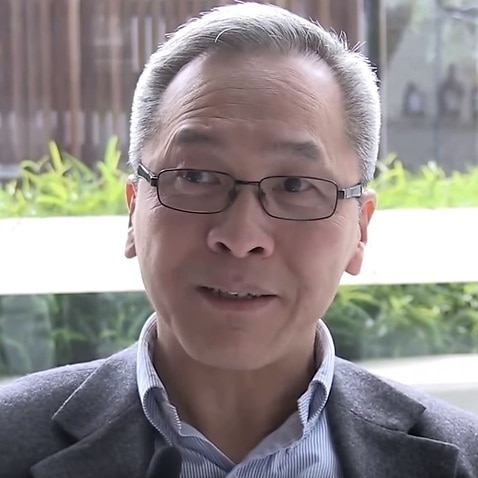