Daria fans, it’s time for us to admit that Quinn has always been the best character on the show. For many long years since the animated series' conclusion, fans have held Daria up as their feminist queen, when she is in fact a problematic mess! So today, I invite you all to join me on the right side of history, where we stan an unproblematic icon, Miss Quinn Morgendorffer.

From a young age, Quinn finds it easy to fit in. Where Daria struggles to relate to her peers, because, as she says, she has “low esteem for everyone else”, Quinn puts herself out there and connects with others easily.

In contrast, Daria aggressively chooses to stay on the exterior of high school’s social structures, passing judgement on others out of fear that they will judge her first. Aside from having it pointed out to her that she’s not popular, Daria doesn’t experience any bullying. In fact, Quinn experiences far more peer pressure from Sandy, the reigning queen bee of the Fashion Club.

On the outside, Quinn has a strong sense of self that comes from knowing that if she performs the way that others expect her to, she can coast through life on her looks and charm. On the inside, however, Quinn struggles with low self-esteem, yearning to achieve more for herself than popularity, but fearful of the repercussions that stepping outside the mould she’s in will have on her friendships and dating life. We see her speak her mind, only to be put back in her place by Sandy and mocked by her sister. 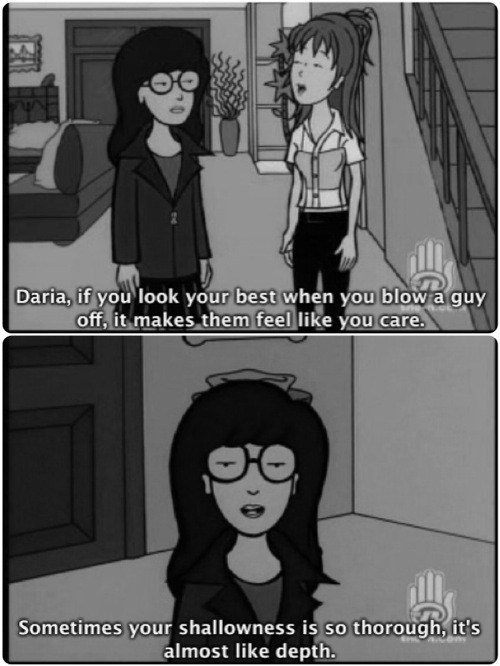 Over the course of the series, we see Quinn grow from being a follower, concerned about her social status and afraid to speak her truth for fear of rejection, to someone who is proud of who she is. Proud to be smart, proud to be a Morgendorffer, proud to call Daria her sister.

This growth is perhaps best seen in the two Daria movies, Is It Fall Yet? and Is It College Yet? In the former, we get the first glimpse of Quinn’s desire for education, not only for the sake of getting into college, or doing better than her Fashion Club friends, but to see herself living up to the potential she knows she has. Prior to this film, we see Quinn reach academic achievement almost by accident, when she writes an impassioned essay comparing school to the prison system. When confronted with positive feedback, Quinn is initially mortified, but quickly adapts, briefly leaning in to an aesthetic she describes as “deep”.

Over the course of the episode, we see Quinn try on academic achievement as though it were a seasonal trend, exploring whether this new element of her identity fits with her personal brand. When the Fashion Club suspends her membership and Daria - feeling threatened in her own identity as a brain - dresses up like Quinn in order to scare her sister into falling back in line, Quinn throws her newfound academic interests aside until the Is It Fall Yet? film. 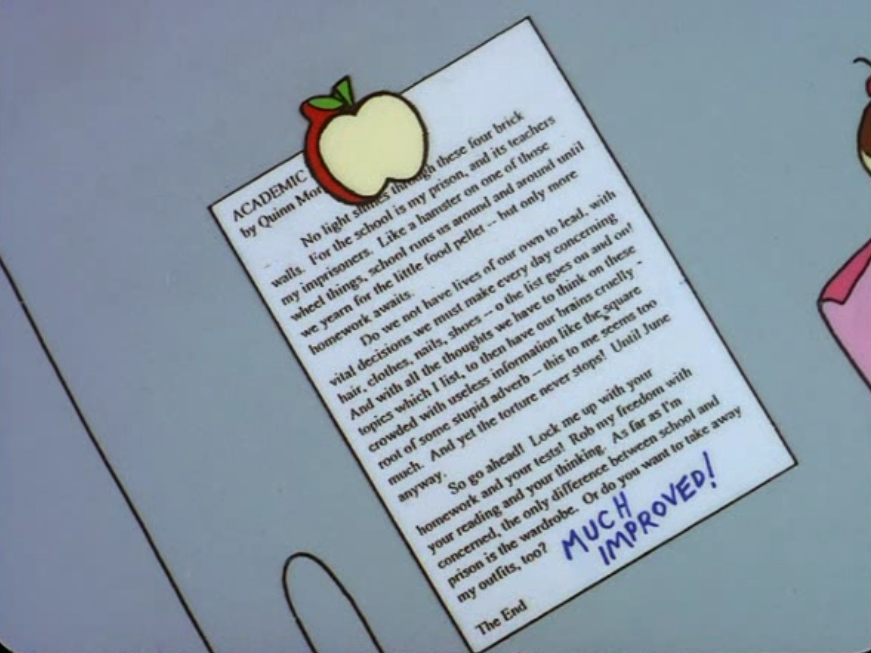 Over the course of the summer in Is It Fall Yet?, we see Quinn actually apply herself academically for the first time, rather than fluking her way to success. After going into tutoring with a blasé attitude, she eventually admits she wants to do better for herself, because she knows she can. After this personal revelation, we watch as she commits herself to learning, while never sacrificing her own personality. Quinn finds she’s interested in history and loves historical pop culture anecdotes as much as ones of the present. When she returns to school from summer vacation, she returns more confident, both in her ability to speak up in class and to stand up to her friends, who want her to stay on their academic level.

This growth continues through the following seasons, where we watch Quinn grow into her self-confidence and identity, and finally admit to her friends that Daria is, in fact, her sister, rather than her “weird cousin”. InIs It College Yet?, Quinn gets her first job as a hostess at restaurant. She quickly bonds with Lindy, a fellow hostess who seems to have a drinking problem. Quinn treats Lindy with empathy and concern, checking in with her after she’s fired for drinking on the job. Quinn’s friendship with Lindy opens her up to new challenges and experiences. At a college party, Quinn criticises a girl’s outfit at a party. Lindy questions her, asking, “You weren’t trashing her, were you?” Later, when Quinn is talking to Daria, she reports that people in college are “smart and nice”, and tells Daria she’s “going to have friends and everything!”

These experiences with a broader social circle end up being one of the catalysts for the ending of the (official) Fashion Club of Lawndale High. As Quinn decides she’d like to extend her sabbatical from her role as Vice President of the club, Tiffany follows suit, prompting Sandy to also take leave, thereby disbanding the group. As we leave the series, Quinn's experiences at college have taught her the world is a bigger than the social hierarchy of Lawndale High, and she's coming into her identity as an individual, one who's less judgemental than before, and ready to explore the world while answering to no one.

Although the Fashion Club is officially no more, Quinn still cherishes her friendships, and the girls agree to catch up to “discuss what they’ll do with all their new free time”. After a summer of emotional growth that has shown her a world of new possibilities, Quinn knows she can explore all of that and still be interested in fashion, beauty and pop culture, and she still cherishes the friends who share her interests. 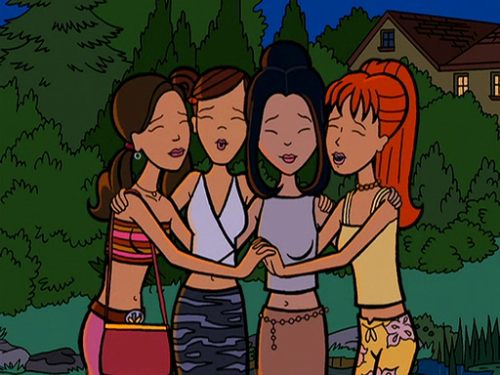 With that, I rest my case! Quinn is a smart, empathetic icon, who also serves looks and lowkey invented fashion blogging, and is clearly the best character on Daria. The end!!!!! 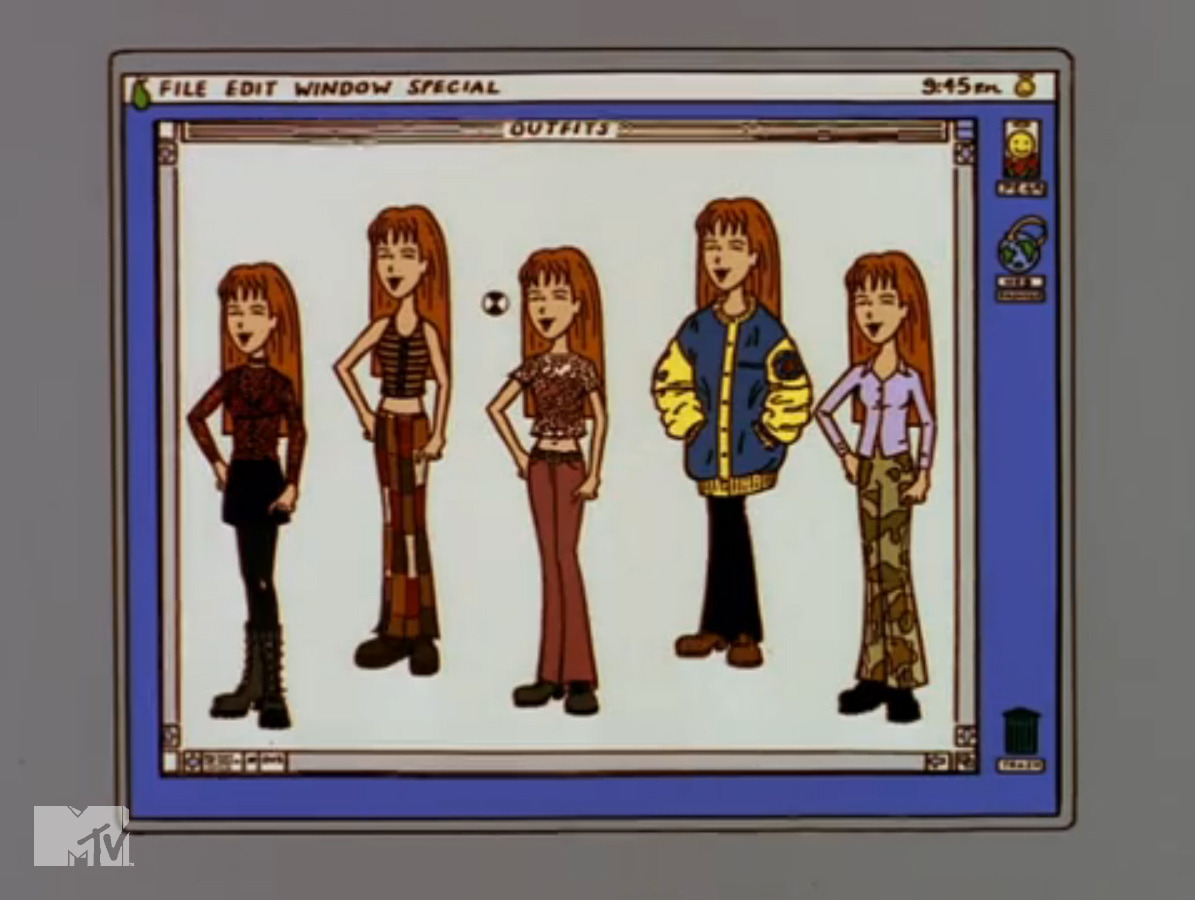 Watch Daria: Is It College Yet? on Thursday 26 April at 9pm on SBS VICELAND. But if you are impatient and can't wait for that, Daria: Is It Fall Yet? is already streaming at SBS On Demand:

More On The Guide
An ode to Daria: the eye-rolling, sarcasm-spouting hero of '90s teens, both then and now
Did entering the the cynical high schooler's sick, sad world feel like finding your home? You weren't alone.
Daria’s 15 deadpanniest moments
Is “deadpanniest” a word? It is now.
Why Daria is the feminist icon every girl needs
As feminism becomes increasingly co-opted by the mainstream, there's something refreshing about Daria's insistence on being her strange and unflinching self.
Advertisement
Advertisement