Brendan Gleeson is the engine that drives 'Mr Mercedes'

Previous Next Show Grid
Previous Next Hide Grid
Image 1/
Video
Audio
Brendan Gleeson and Stephen King might not seem like a natural pairing, but in serial killer thriller 'Mr Mercedes' they put the pedal to the metal. Now streaming at SBS On Demand
By
Anthony Morris

Like all classic Stephen King tales, there’s something just a little… unusual about Mr Mercedes, and it all comes down to one man: Brendan Gleeson. Having him playing a retired cop working one last case is perfect casting – he’s the embodiment of down-to-earth charm and authority, someone you’d trust even when you know he’s up to no good. But dropping him into a world imagined by Stephen King? That’s a left turn that opens up a world of possibilities.

Gleeson’s been everyone’s warm yet slightly dangerous big-screen uncle for well over two decades now. The Irish-born actor won over a generation as Mad Eye Moody in the Harry Potter films (then did it again as Knuckles McGinty in Paddington 2), and he’s been nominated for a stack of awards for character pieces like The General, In Bruges, Calvary and The Guard. He’s no stranger to horror – his fate in 28 Days remains an all-time shocker – but even when he’s playing a monster, his humanity shines through. 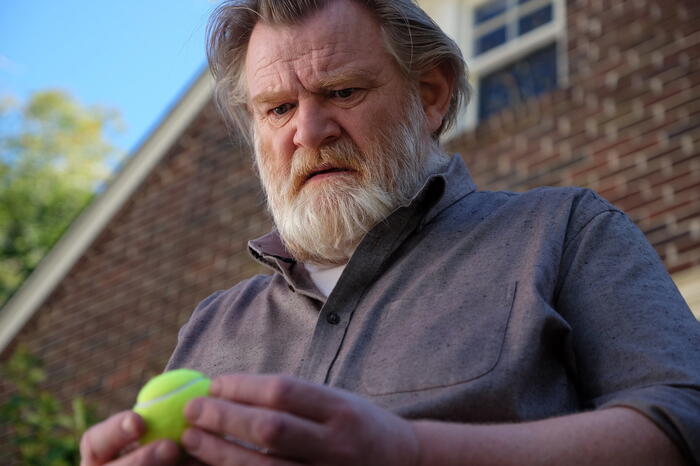 And while King might have branched out into high-concept dramas like The Dome and 11.22.63 in recent years, horror’s still his home. Whether it’s the big screen (It, The Shining sequel Doctor Sleep, the Pet Sematary remake) or TV (the recent miniseries of The Stand), he’s all about keeping you up at night. That said, over the last decade or so, King’s revealed another side to his work – a side that likes crime.

Mr Mercedes starts out eager to give traditional King fans exactly what they think they want. It’s 2009 and a growing group of people are milling around outside a job fair, desperate for work in a shrinking economy. It’s what King’s best known for, a big slice of small-town America illustrated through a collection of sharply drawn character studies.

Then a man puts on a clown mask and drives his car through the crowd. Once this would have been the start of another Stephen King supernatural horror story (the mask is a not-so-subtle glance back at the killer clown from It). Here, things take a different twist as we jump forward years to meet up with Gleeson’s now retiring cop Bill Hodges. He was assigned to the job fair massacre (16 people died), only he never found the killer and it’s eating him up inside. He’s not so much retiring as just giving up – until he gets a message from the killer that gives him a reason to go on.

It’s a reason he most definitely needs. In the early episodes Gleeson has plenty to work with playing a depressed ageing, defeated man and he brings everything he’s got. Hodges is divorced, he’s drinking too much, and when he looks back on his life he doesn’t see a whole lot to celebrate. Mr Mercedes is in part the story of a man finding a reason to stay alive, and with Gleeson it has someone more than capable of showing the depths of the emotional pit – and the empty crumbling house – he finds himself in.

King’s never been big on whodunnits, and Mr Mercedes doesn’t even pretend to hide the identity of the killer from us. We know almost right away that the messages Hodges is getting are coming from Brady Hartsfield (Harry Treadaway), a computer expert stuck in a dead-end job. To his workmates, he’s nothing special; in his basement home he’s driven by personal demons that have led him to see people as things to be controlled for his own amusement. His latest plaything? Hodges. Developed by David E. Kelley (Big Little Lies) and with expert crime writers such as Dennis Lehane (The Wire) providing scripts, what follows is an increasingly knife-edge game of cat and mouse. Brady taunts and attempts to manipulate Hodges even as his personal life crumbles; Hodges tries to track him down and slowly begins a relationship of sorts with Janey Patterson (Mary-Louise Parker), the woman whose car was used in the killings. He even gets a sidekick of sorts in fellow investigator Holly Gibney (Justine Lupe), a character who’s become one of King’s favourites (she also appears, though played by a different actress, in the recent HBO adaptation of King’s The Outsider).

Over the first two seasons of Mr Mercedes the battle between Hodges and Brady escalates in ways all but impossible to predict (unless you’ve read the book). It’s safe to say that fans of the kind of work King’s best known for will find the way things develop increasingly to their taste. Throughout all the twists and turns Gleeson is the series’ core, giving a grounded, endearing performance that always feels real no matter what he’s facing.

And despite the Ohio setting, his swearing is always 100% Irish; you’ve got to be happy with that.

Mr Mercedes seasons 1 and 2 are streaming at SBS On Demand from 3 April.

MORE FROM THE GUIDE
Here’s what’s leaving SBS On Demand in April 2021
Travel shows and cooking shows, documentaries and world movies, drama series galore. Catch all these and more this April.
Top new series in April 2021
A new Australian short-form drama series, and British, Italian, Swedish and Chilean drama. American comedy and new SBS Food shows. And, you guessed it, Nordic Noir. Plus, an Australian-first interactive documentary experience via the SBS On Demand app. April brings the entertainment!
Open your eyes to SBS On Demand’s Sexuality Uncovered collection
Enjoy our candid selection of programs that bring you a global perspective on love, sex, gender and sexuality. All streaming for mature audiences, at SBS On Demand.
What to watch next? Dive into these viewer and critic favourites at SBS On Demand
From award winners to boundary breakers, you'll find gripping stories waiting for you in these acclaimed series.
Unmissable stories: the Investigative Journalism collection at SBS On Demand
New in-depth investigative series from VICE are now streaming at SBS On Demand. Plus the 2021 season of our flagship news and current affairs programming has begun.
10 TV thrillers with a supernatural twist at SBS On Demand
Ghostly apparitions, mysterious objects, mermaids and Vikings in modern day Norway. Nothing is as it seems in these supernatural thriller series now streaming at SBS On Demand.
Immigrants from the past face a culture clash in Nordic police drama ‘Beforeigners’
Waves of shocked people suddenly transported from the past is not the biggest mystery in this intriguing crime drama.
'Shadowplay' creator Måns Mårlind selects his favourite shows at SBS On Demand
Seven series that deliver on how he judges a show: truth, challenge and "that unexplainable quality".
Who’s who (and from when) in Nordic time travel drama ‘Beforeigners’
Crime show meets time travel as people from the past start appearing all over the world.
Advertisement
Advertisement