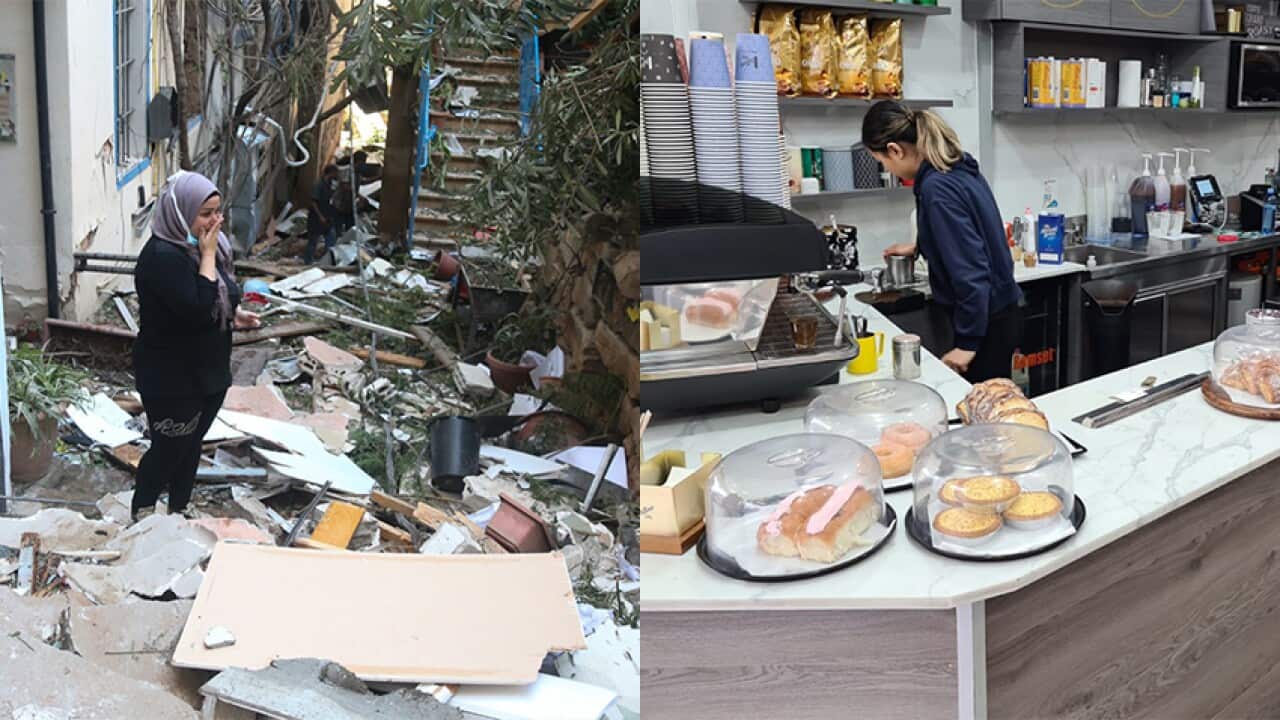 A Lebanese woman reacts to the destruction around her, one day after the explosion at the Beirut Port. Cafe owner will donate his cafe profit to Beirut. Source: EPA and Rabih Chamma

A Sydney cafe owner will donate his week's profits to the victims of the Beirut explosion, while a social media campaign is gathering essential items to send to Lebanon.

Published 10 August 2020 at 4:36pm
By Maram Ismail
Source: SBS
Despite the difficult economic situation that Australia is going through due to the COVID-19 pandemic, members of the country's Lebanese and Arab communities are doing what they can to assist the citizens of Lebanon and it's capital Beirut following last week's horrific explosion.

More than 150 people were killed and 4000 others were injured when an explosion tore through Beirut's port region on Tuesday.

Among the Australians rallying to assist the victims is Rabih Chamma, who runs 'Cafe on the Boulevard' in the Sydney suburb of Punchbowl.

He has decided to donate his entire week's profits to the victims of the explosion, who were already
enduring a harsh economic crisis prior to the explosion.

"After what happened in Beirut, each of us is trying to help as much as we can, so I decided to donate the profits of the cafe to the victims of the Beirut blast," he told SBS Arabic24.

"It seems that all of my customers are also ready to help from their side as well."

Despite the difficult economic situation that Australia is going through due to the coronavirus crisis, which has seen the closure of thousands of businesses throughout the country resulting in mass job cuts, Mr Chamma believes the situation in Australia is still far better than that in Lebanon.

"We live in a much better condition than they are, even in the conditions we are going through here because of COVID-19.

Lebanese youth clear glass debris in a street, one day after an explosion at the Beirut Port. Source: EPA

"While we are blessed with government assistance here, the affected people in Lebanon lack any support. Their suffering continues with COVID-19 and the explosion has now made their living conditions much worse.

“There is no comparison between our situation and theirs.”

His efforts will go beyond donating his cafe's profits, with the aim to help those worst affected on the ground in Beirut.

"I have a team working with me in Beirut and have already started looking for the most urgent needs of the people of the explosion region there. We will select a few hospitals that are in need of support and provide them with food supplies. We will prepare hot meals for those who have lost their kitchens and homes even if they are not among the injured and we want to try to find them temporary accommodation too.

"We will try to do everything we can. There will be no limits."

The news of the explosion and its horrific aftermath shocked Lebanese people across the world and in Australia, where the community numbers around 230,000.

“I was shocked. The community around me is also shocked,” Mr Chamma said.

“But the beauty of our community here is that we are the first to stand up and cooperate and reach out to offer help - we are always ready.”

Mr Chamma founded a not-for-profit organisation years back called Merciful Group which works to provide support to many of the most vulnerable communities around the world.

"We worked to help in Palestine, Lebanon, Bangladesh, Uganda and Sri Lanka. But since the COVID-19 crisis hit the world, we have directed our work to help Lebanon and we will now continue in Lebanon."

He migrated to Australia with his family just after his first birthday, but his extended family remains in Lebanon.

Another An initiative started by Lebanese Australian woman Carla Abu Yaghi is also gathering momentum within the community.

Together with a group of her friends, she launched a group to gather supplies to send to the country by plane.

“A few containers of essential goods to support those in need who have been so badly impacted by this horrible tragedy."

Ms Yaghi said that although she was born in Australia, her heart is with Lebanon during this period of hardship.

"I posted on Instagram that I would like to help Lebanon. My friends messaged me straight away that they wanted to join to, and now we are a large group working together.”