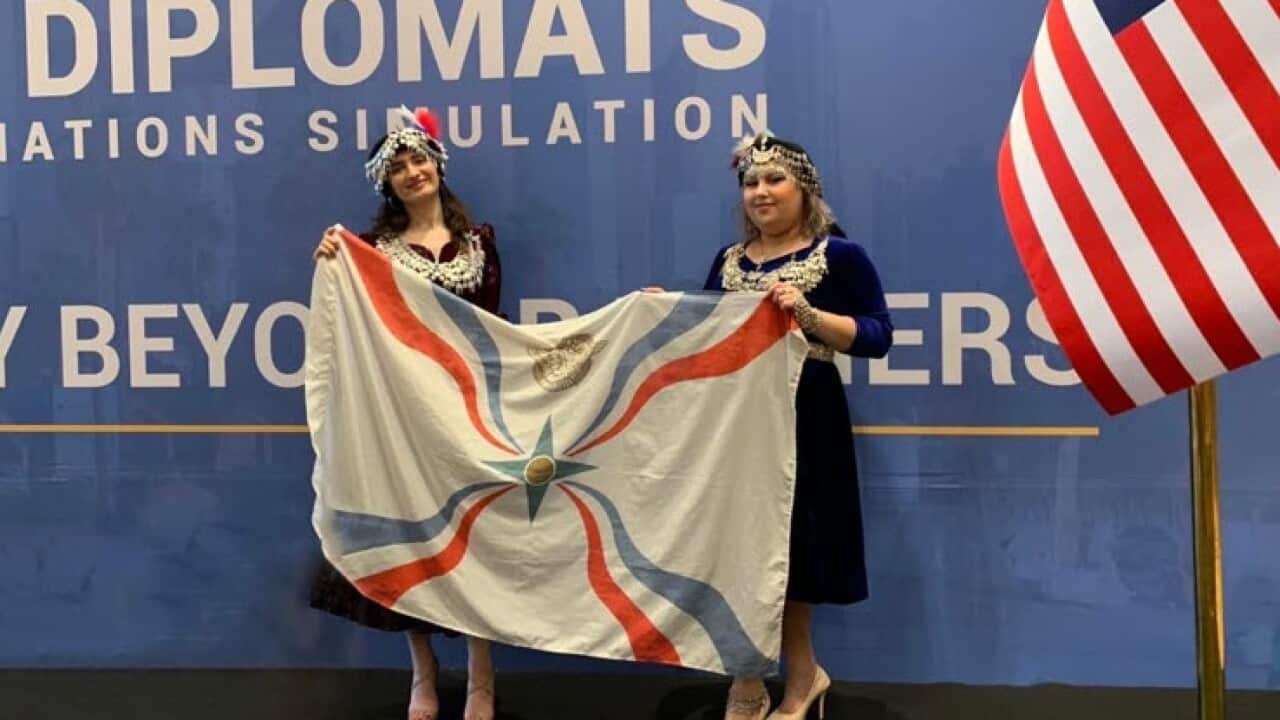 L to R, Aketa and Romta at the Best Diplomats on Cultural Day dressed in Assyrian folk attire.

Three young Assyrian women from Iraq recently attended the United Nations Best Diplomats Conference as delegates. A conference was held in Dubai from May 20 to May 23, 2022.

Two recent university graduates with a passion for Assyrian activism, education in human rights and peace shared their experiences about an opportunity to attend the United Nations (UN) Best Diplomats Conference in Dubai, held in May 2022.

This was their first UN conference and they both said they were excited to attend, gain skills, meet people and most importantly, share their message about being Assyrian and raising awareness about their community and culture.

Advertisement
They also encouraged other young people to register and participate in the experience.

While most of the time was very positive, Aketa said they were surprised and saddened when other delegates didn't even know their homeland existed.

I was very disappointed when asked by other participants, "Who are the Assyrians?"

Aketa said she was able to utilise her knowledge from her degree and discuss solutions while Romta said she discovered how best to apply the skills she has gained in real-life work and build on that.

Both Romta and Aketa said they wished to attend future conferences with the United Nations Best Diplomats Program.

On one of the days, Cultural Day, Aketa and Romta dressed in Assyrian folk attire, which they say drew a lot of attention from all the other attendees who wanted to learn about their culture and nation and snap photos with them.

Our appearance with Assyrian traditional costumes created so much interest among the others.

Romta says she was eager to share her message about who the Assyrians are and that they still exist today.

L to R, Aketa and Romta holding their Certificates on the last day of the Conference Source: Akita.jpg

With such a significant number of registered participants for 2022, the conference will be hosted again in September this year to allow those on a waiting list to attend.

Aketa and Romta both self-funded their registration, stay and travel costs. They stressed that although it might be financially difficult to self-fund, the opportunity was quite valuable to their future careers and encouraged young Assyrians to register and attend the future conferences if they could.

They expressed their hope that organisations representing the Assyrian plight could support, sponsor or fund any young people who were studying or graduating in such professions and fields, to attend future conferences and support young generations in addressing the rights of Assyrians in any way they could.

Nearly 100 participants representing many nations from across the globe attended. The UN Simulations part of the conference encourages young people to register, observe and learn about how member states conduct conferences relating to human rights and peace. This year’s theme was the ongoing Russia and Ukraine crisis.

Some of the young deligates at the conference Source: Akita.jpg

Each individual represents a member state and is involved in mock discussions, negotiations and finding solutions for particular human rights issues by attending workshops and experiencing real-life opportunities on how the official member states address international matters at the UN.

For organisations interested in supporting or funding future youth to attend the UN Simulations component, contact us so we can see how we can share your message through SBS Assyrian.