Data analyst Elisa Choy says Labor is predicted to form a minority government, with support from the Greens and independents. 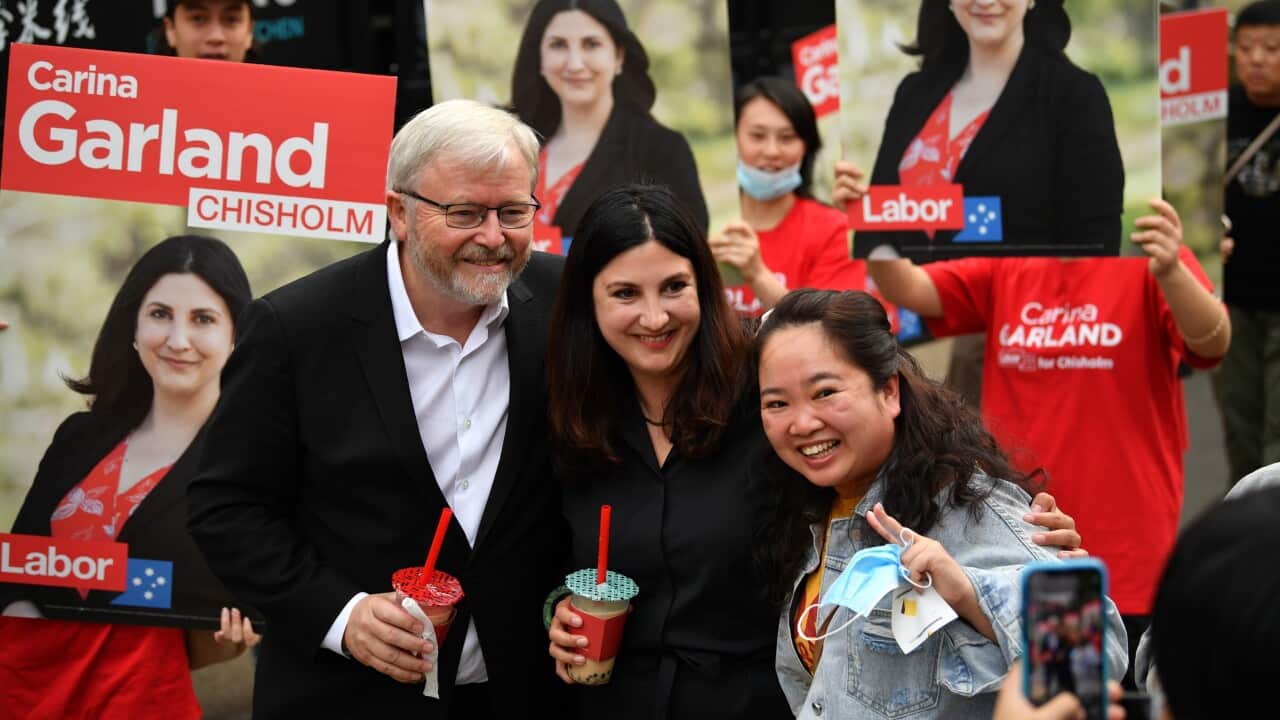 Elisa Choy of Maven Data predicts Labor's Carina Garland will cause an upset in the seat of Chisholm. Source: AAP

May 21 is a momentous day as millions of Australians head to the polls to cast their votes.

It is likely to prove a historic occasion as a raft of new MPs are predicted to be elected to parliament, which would change the country’s political landscape.

Elisa Choy, founder of Maven Data which uses AI technology to analyse emotions shared on social media platforms, blogs and websites, says we are “in for an Independents' Day” as has been predicted during this nail-biting six-week elections campaign.
Data analyst Elisa Choy predicts Labor will be victorious in the 2022 federal election. Source: Supplied

Advertisement
She suggests there is a great disillusionment from voters with regard to the two major parties and their respective stances in recent elections.

Data collected predicts 13 new independents sweeping to power, with the Coalition suffering a net loss of 19 seats and Labor forming a minority or slim majority government with support from the Greens and independents.

Ms Choy also indicates Asian-Australians are angry with the anti-China rhetoric, which could possibly have an influence on how they vote.

These include electorates that have a high Chinese-Australian population including Kooyong and North Sydney, which she predicts will be won by independent candidates Dr Monique Ryan and Kylea Tink.

Ms Choy points out that in Kooyong, for example, as Josh Frydenberg is the federal treasurer, the Chinese-Australians felt "betrayed" over the management of Covid-19 from the federal government, and this would influence them to support independent candidate Dr Monique Ryan.

Labor will be victorious in other seats with substantial Chinese populations such as Chisholm and Bennelong, and Higgins, Swan and Ryan which have a significant Chinese minority.

"Traditionally, Chinese-Australian voters support the Liberal Party more than the Labor Party. But because we have seen the anti-China backlash, and another element is how Covid-19 was managed across the country, this plays a role in influencing Chinese-Australian's votes," Ms Choy told SBS Chinese.

"During the height of the pandemic, it was seen as Victoria vs NSW, and Daniel Andrews was talking about how the federal government was favouring NSW."

Ms Choy says these predictions serve as a wake-up call for the Liberals and an opportunity for them to seriously consider what they stand for.

"Chinese-Australians, and Indian-Australians too, traditionally favour the Liberal Party but they feel the party no longer resonates with them. These two are the largest migrant cohorts and they have influence," she said.

"Indian-Australians are burnt out from the anti-India backlash when there was a ban on Indian-Australians from returning to Australia at the height of the Delta variant which was rife in India, and the Australian government's response was issuing heavy fines."

In the last two weeks, the data points to the independents – particularly the Teal candidates - having gained momentum as they are campaigning on basic priorities of the everyday Australian.

These include climate change, renewable energy, integrity and tackling corruption, cost of living, housing affordability and rocketing interest rates, which are influencing voters to choose a candidate whom they believe reflects their values.

Read more
‘Election Whisperer’ Elisa Choy on her predicted outcome for the 2022 federal election
Why WeChat may prove the clincher for Chinese voters in key election seats
He attracted hundreds of millions of dollars of investment to Australia – and now he says he's leaving
MP Gladys Liu blames 'grubby campaigns' after her election poster was defaced
With racism on the rise, June is taking Kung Fu classes to protect herself
Multicultural Moreton: Taiwan-born Steven Huang vying to make history in marginal Brisbane seat