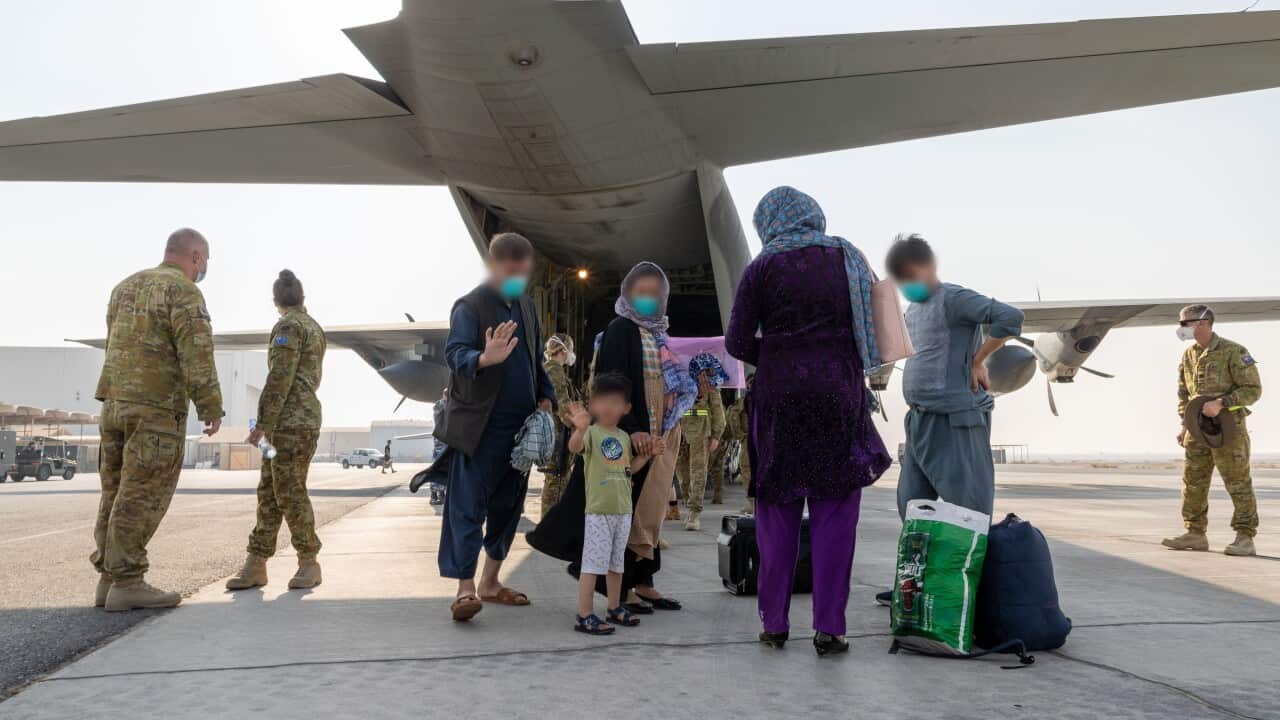 Leaders in Australia’s Afghan community have heaped support on a Christian church campaign calling on the federal government to increase its Afghan refugee intake, amid speculation more than 15,000 have already applied.

Published 31 August 2021 at 10:54am
By Sam Anwari
Source: SBS
Afghan community leaders from across Australia are urging the federal government to raise the humanitarian intake of Afghan refugees to at least 20,000 after Australia's evacuation mission from the country ended due to security threats on the ground.

Days after the Taliban’s takeover of Kabul, the Australian government announced it had
allocated an initial 3,000 places to Afghan refugees within its humanitarian program.

Prime Minister Scott Morrison said the number was “a floor, not a ceiling”, an indication that places could increase in the future.

Advertisement
Sarah Erfani, a board member of the Baba Mazari Foundation (BMF) in Melbourne, thanked the government and defence personnel for their initial response to the crisis in Afghanistan but said 3,000 places was “certainly not enough”.

“We are pleased with the immediate response from the Australian government following the fall of Kabul,” she told SBS Dari.

“It is understandable to us that the government, especially in the current situation, with the issues that COVID has created and many agencies are not able to work as they should, made every effort to evacuate Australian citizens, visa holders, their families and others who are at risk.

“The 3,000 visas are not really a fresh number, because, in the past, the share of the Afghan people from the humanitarian visas was close to 2,000, and now only 1,000 has been added.

“This is something that’s certainly not near enough in the current situation.”

The call comes after Australian church leaders launched the
Christians United for Afghanistan campaign
, calling on the federal government to “provide a special intake” of an additional 20,000 Afghan refugees.

Australia has a “moral duty” to take as many Afghan refugees as it can, Mr Costello said.

BMF has partnered with the Welcome Group to provide emergency relief to people who have been evacuated by the Australian government over the past two weeks.

Maryam Zahid Popal, the president of the Australian-based group Afghan Women on the Move welcomed the Christian leaders’ campaign and called on other Afghan-led organisations in the country to band together in a similar way.

She stressed that the government should work with community organisations to ensure the right mechanisms are in place to identify those who are “truly in danger”.

“We welcome the move by Christians who wanted to act in unity and come forward to help Afghans and will work with them,” she said.

Ms Popal said she understands that around 15,000 to 16,000 applications for humanitarian visas have already been lodged by Afghan nationals since the allocation of the 3,000 places was announced by Mr Morrison.

She said that without putting the right mechanisms in place, the process of issuing visas to eligible people “will be prolonged”.

Meanwhile, the Australian government announced it has formed an Advisory Panel to help with the resettlement of recently evacuated Afghans.

The panel will help with the “planning to support the government’s commitment to provide an initial 3,000 humanitarian places in the offshore Humanitarian Program to Afghan nationals”.

Six of the 12 members of the panel have been chosen from within the Australian Afghan community.

“The Advisory Panel is a group of highly regarded Australian-Afghan community leaders and refugee and settlement experts, chosen for their commitment and expertise in refugee and integration issues,” Immigration Minister Alex Hawke said.

Stuck 'in limbo' for years, Khan is pleading for Australian residency to help his family in Afghanistan

“In consultation with the Advisory Panel, the government is also looking at what further specialised support might be needed to enhance the settlement process and make sure the evacuees start their lives in Australia on the strongest possible footing.”

From Afghanistan to Melbourne: Shamsiya wants to become 'voice for the voiceless' in Australian media