Dutch backpackers 'ready' for their adventurous escape from Australia

After months of preparation and lots of mishaps, Dutch backpackers Jordy van der Voort and Daniel Wiessing are ready to embark on a voyage home on the boat they purchased to escape the coronavirus in Australia.

Right at the start of the coronavirus crisis in Australia, 29-year-old Dutchman Jordy van der Voort bought Samara, a 47-footer ferrocement ketch, in order to escape from COVID-19 in the country. He was soon joined by compatriot Daniël Wiessing (24) who was sold on the idea as soon as he found out that the boat shared the name with the Swiss girl he recently met and for whom he has "deep feelings".

The adventure was beckoning and elaborate plans for the nautical trip were made. The interest in their journey was astounding as many Dutch backpackers from all over Australia requested to join the sailors on their trip to the Netherlands. International yachting community unleashed "wanted and unwanted advice" on required equipment and expertise, on the matter of piracy, and about the only two seasonal sailing routes to the Northern Hemisphere - via the Panama Canal and the other via the Suez Canal.

The thing is... if you want some adventure in your life, you shouldn't be listening all the time.

A few problems have been clear from the start. Though both adventurers can sail a boat, a sea voyage of this calibre requires a bit more experience in sailing than they have accrued even after doing a crash course for a sailing certificate. It also became clear that Samara, unfortunately, "needed more TLC" than first expected, which in the boating world may mean anything from 'requiring a lot of work' to 'don't even go close to it'. 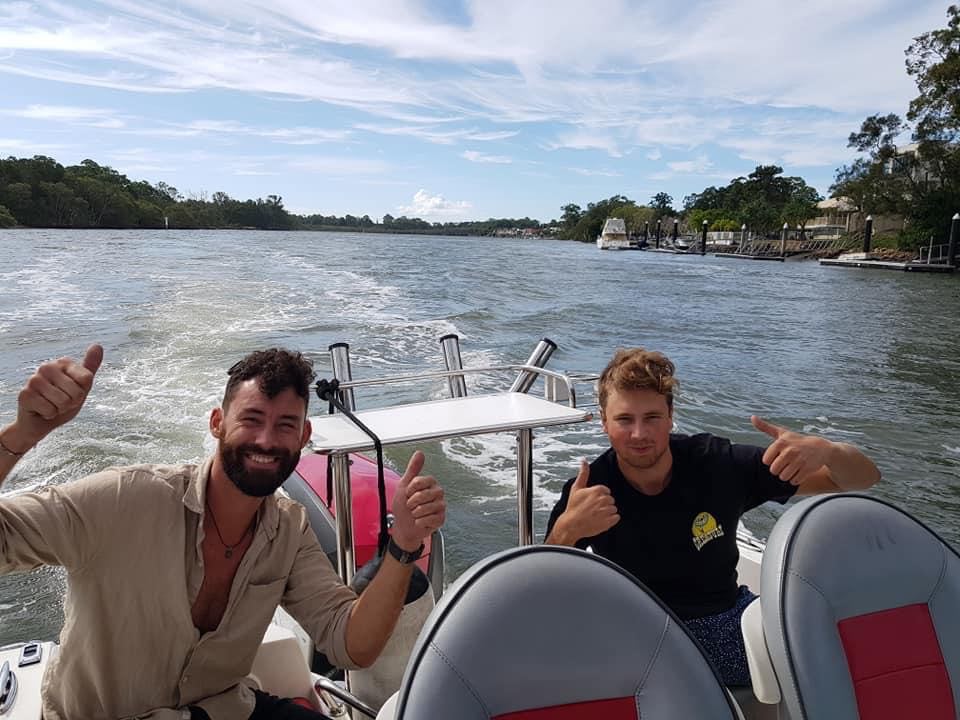 Boats are expensive but rum is cheap

Mr van der Voort bought the boat "for a good price" but soon discovered its hidden defects and problems. Problems that needed fixing: the rigging (the system of ropes, cables and chains, which support a sailing ship) needed replacing, the mast was rotten, the ax of the rudder and its bearings needed replacing, the navigation system was fried in a lightning storm and some patches of the ferrocement hull needed fixing. It also needed a new engine. 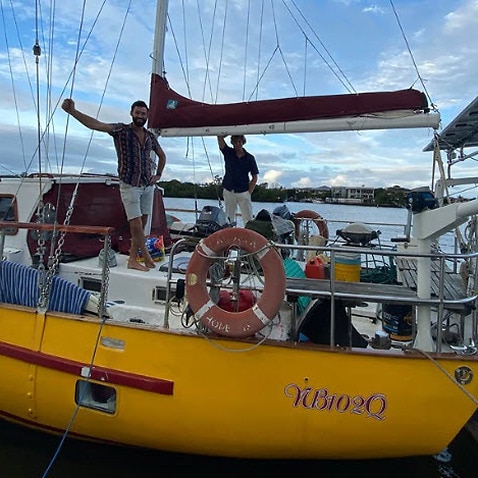 Dutch backpackers buy a boat to escape from 'coronavirus in Australia'

He and Mr Wiessing drew the line at replacing the electric anchor system and intend to haul the 40-kilo anchor in by hand - not a small task - but they are young and strong.

"We are Dutch after all," says Mr Wiessing, referring to his country's seafaring history that includes a small Dutch ship called the Duyfken hitting the Australian shores in 1606,  a good 164 years before Captain James Cook landed here.

On a boat, there is always something that breaks when you least expect it or when you need it. They have to keep their heads together and play it safe.

And like their ancestors, certain quantities of "life-saving rum "will be stocked for the journey because "beer takes up too much storage room," says Mr van der Voort.

The Duyfken on the Swan River
wikimedia

The impulsive sailors have received a lot of help from the boating community: "free paint, free food, lots of advice," says Mr van der Voort, especially from Slim, a fellow boat owner at the boatyard where Samara got the make-over.

Slim, aka The Bolt King, unscrewed the bolts on the engine block, which apparently is a special skill. Once the bolts were finally removed, the engine block needed lifting out of the boat and unfortunately the boatyard's crane happened to be broken at the time. Turns out Mr van der Voort has some special skills himself. He had a good look at the crane and fixed it.

While the Dutchmen have spent several weeks preparing for this journey, including undertaking a sailing course, many experienced yachtsmen have told them that they are still unprepared for a journey of this level.

Seasoned boatsman and fellow Dutchman Bart van Walderveen agrees that it is a 'hell of an adventure' but he is also a bit concerned that Mr van der Voort and Mr Wiessing might be "too optimistic" about their level of preparedness for the voyage.

"On a boat, there is always something that breaks when you least expect it or when you need it. They have to keep their heads together and play it safe," he told SBS Dutch.

"Every boat is different and they need to get to know her and her behavior in both good and bad weather."

Mr van Walderveen says he is a bit jealous because he is actually planning to do the same trip on his own 45-foot yacht currently moored in Manly, Queensland. 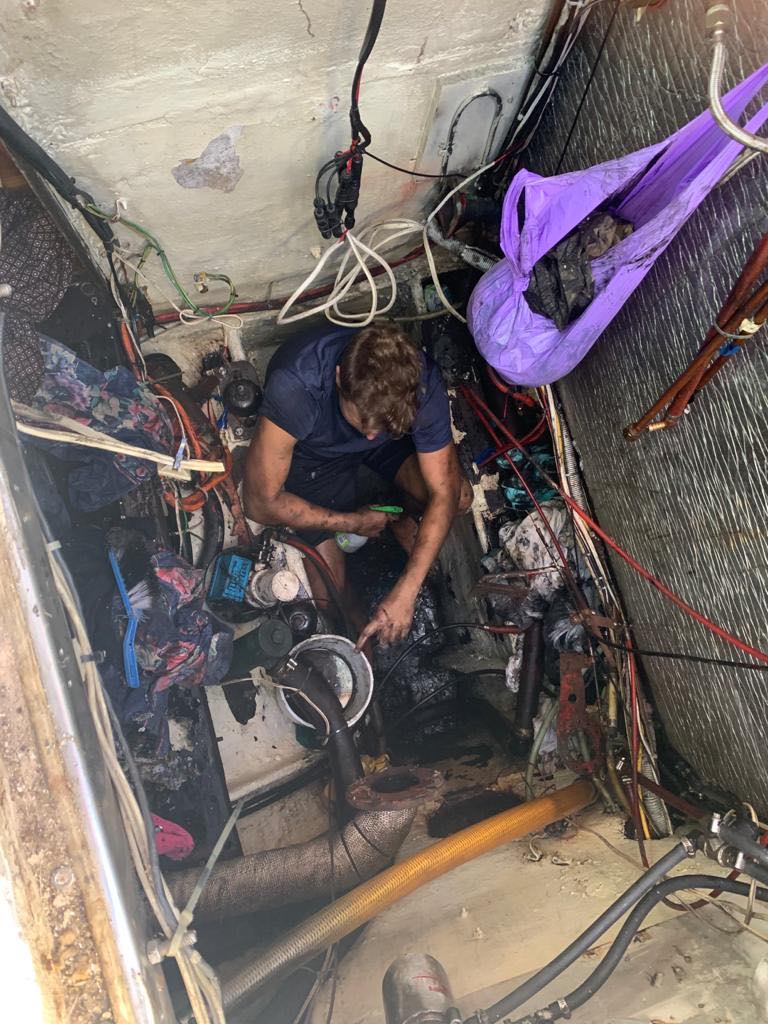 Why not just fly home instead?

However, the Dutchmen are committed to this adventure.

"The thing is that if you want some adventure in your life, you shouldn't be listening all the time," says Mr van der Voort.

They are ready to clear the decks and start the first leg of the journey from the Gold Coast to Cairns, into the Coral Sea.

However, they do admit that they are afraid of what's coming ahead in their coronavirus-inspired adventure, this being their first time in open waters, first time raising the sails. Daniël Wiessing shrugs his shoulders and says he's not sure whether his Swiss love Samara will be waiting for him when he arrives in the Netherlands.

This and the technical issues with Samara the boat notwithstanding, the cocaptains are not contemplating walking away from their adventure and flying home instead.

"We have the boat here and we are going for it," they exclaim in unison.