Dutch quilter Jeltje van Essen from Quilt Shop 100 rozen in the city of Deventer started making mittens in November for the Australian koalas when she saw the footage of their burnt paws.

Jeltje and her band of needling volunteers have now branched out now that the needs of the Australian wildlife caught up in the massive bush fires are changing. Morgan Leigh from Byron Rescue Crafters, now renamed Rescue Craft Co, may have put the first call out for koala mittens, but Jeltje and her worldwide network of quilting groups got the international sewing aid rolling. 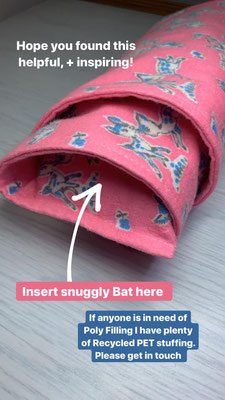 Offers of help are coming in from everywhere. The Dutch airline KLM transported some boxes with mittens and pouches, the Netherlands Embassy in Canberra stepped in and helped with getting the goods to Australia, and then there are the thousands of people who feel powerless in the face of the Australian bush fires but want to contribute anyway. Some donate money, but Jeltje’s sewing example saw the rise of groups everywhere who are making mittens and wraps and pouches and blankets. Dutch Australian Sonja is picking up some wraps.
Deventer Stentor

Jeltje explains that the bats can wrap their paws around a small pillow and how their burned wings are covered with a hygienic cloth. She is however a little concerned about the use of acrylic material to make bird nests because they are not biodegradable. “Cotton is the only appropriate fabric to use”, says Jeltje.