Associate Professor Abeer Alsadoon fled Iraq as academics were being systematically killed during one of the country's bloodiest periods. She managed to rebuild her life in Australia and was now considered one of the world's leading experts in surgery using mixed reality.

The use of robotics and mixed reality technology in delicate surgical procedures is an emerging and rapidly evolving field.

In Australia, Charles Sturt University is one of the leading institutions in this field and Associate Professor Abeer Alsadoon is at the heart of it.

Dr Alsadoon arrived in Australia as a refugee from Iraq in 2009. During her journey to safety, she avoided several life-threatening situations and overcame many personal obstacles, to now being considered a pioneer in the field of tech-assisted medical surgeries. 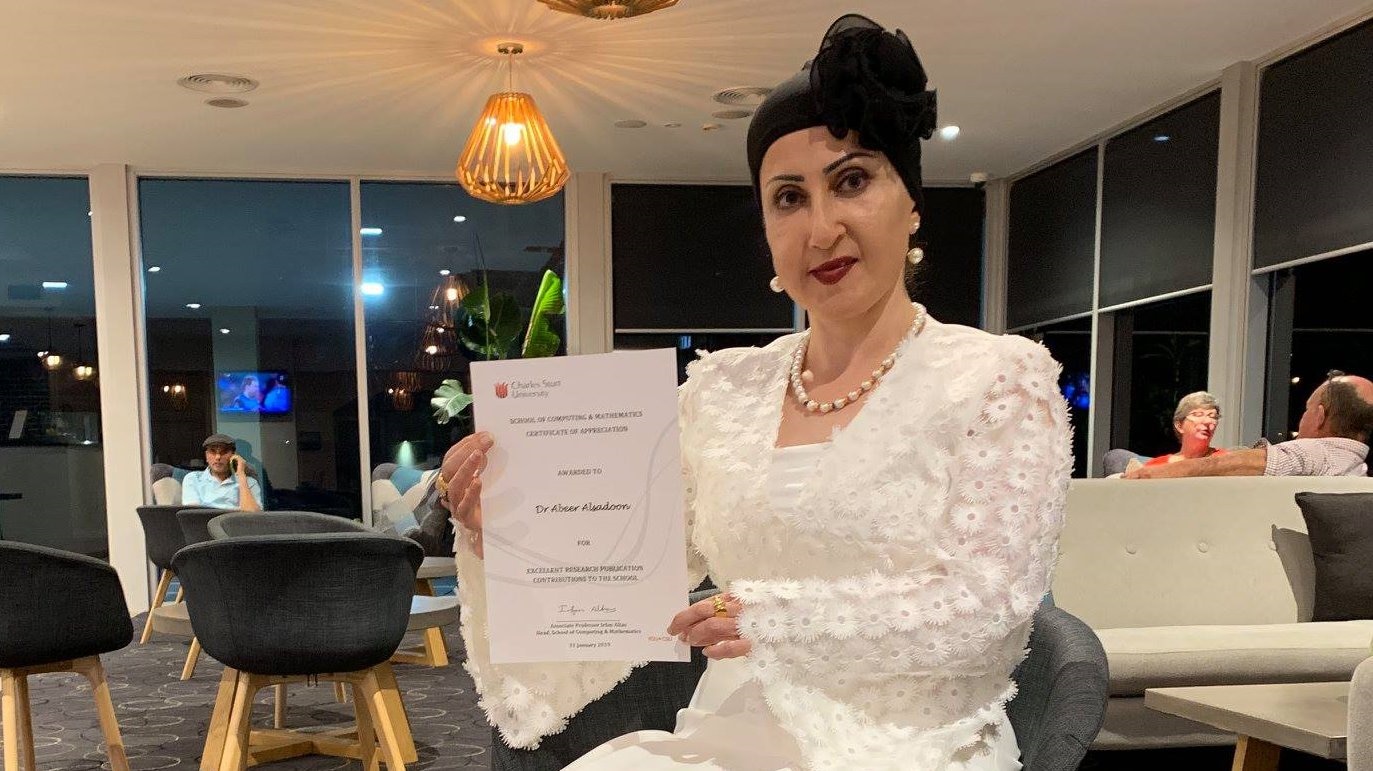 As a straight-A student during secondary school, she was accepted to study at the University of Technology in Baghdad, which is one of the country’s top tertiary institutions. Degrees attained at the university are commonly recognised in Australia without the need for additional study.

She would go on to complete her Masters and joined the university's competitive PHD program, and finished at the top of her class among a cohort of 21 students.

She went on to become a full-time lecturer at the university in 2000. 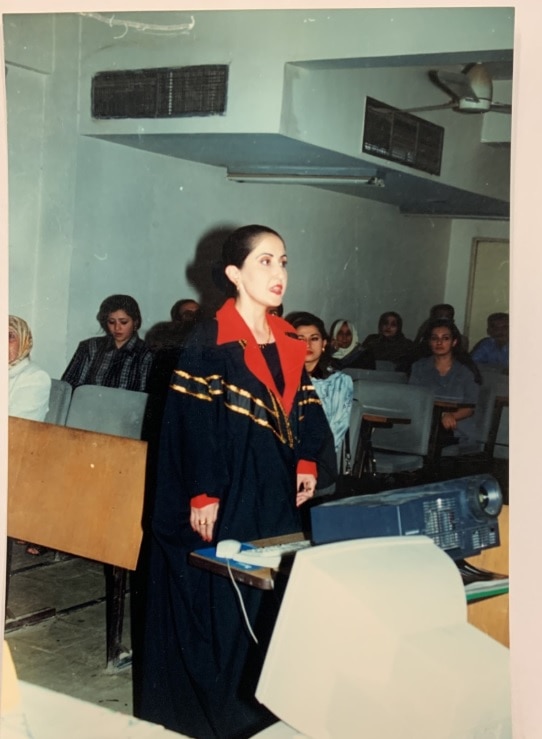 During her time at at the University of Technology, in Baghdad
Supplied

However, it was the invasion of Iraq by a coalition of countries led by the US in 2003 that changed her life forever.

The university's campuses were not spared from the growing level of violence which engulfed the city during the years following the invasion. During the five years after the conflict began, it was estimated that 400 academics had been killed and thousands were forced to flee the country.

“The university professors were being killed, our faculty’s dean was killed, one of my Masters' supervisors was also killed,” she recalled.

“It was a systematic campaign to ‘brain drain’ Iraq.” The chaos and lawlessness created by the conflict, along with the rise of various armed militias, made it impossible to pin responsibility for the bloodshed on a single entity.

In 2006, a fresh wave of violence was set off in Iraq when terror organisation al Qaeda bombed one of Shia Islam’s holiest sites, the Askariya shrine. 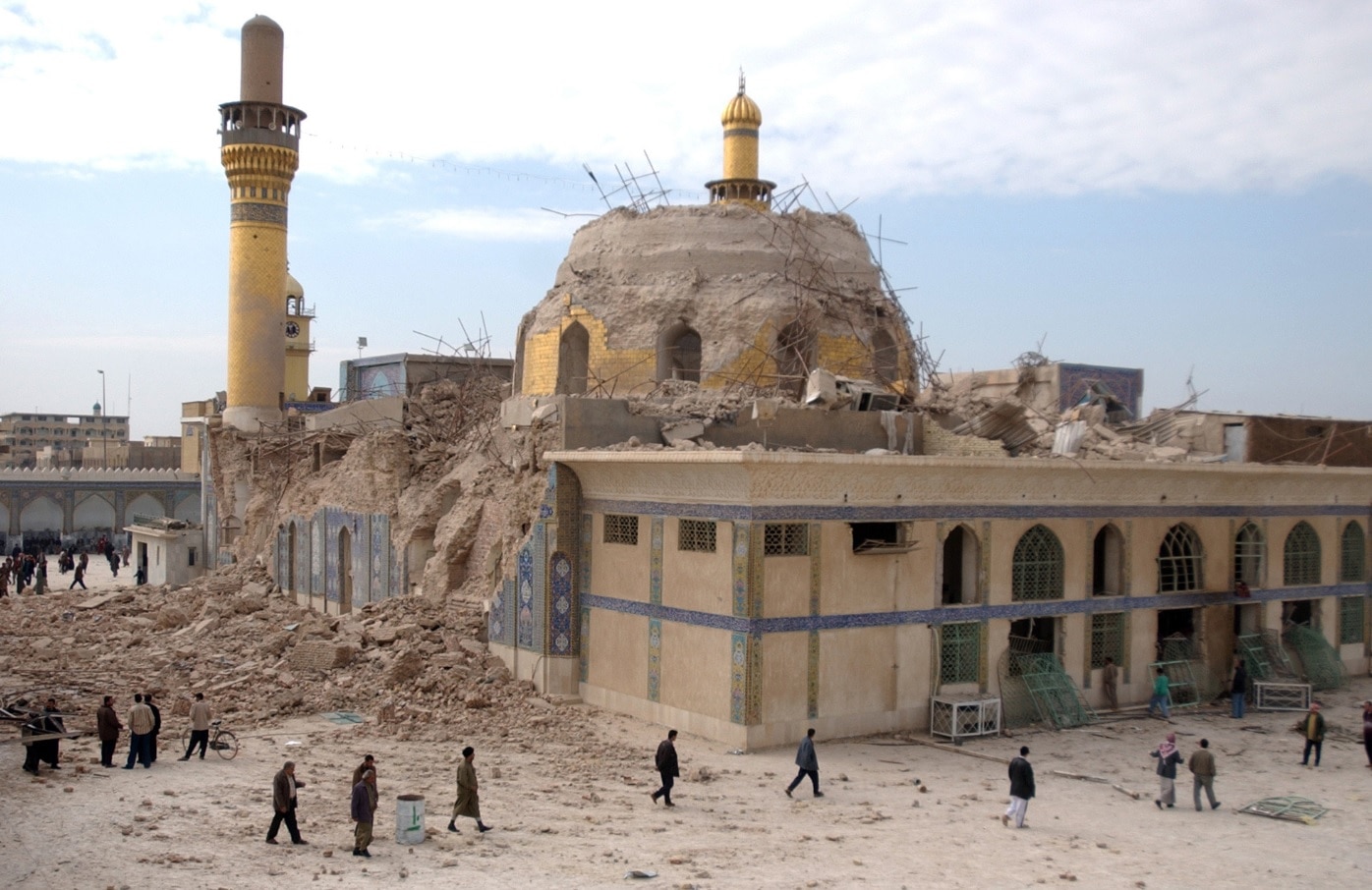 Iraqis walk past the damaged Askariya shrine following an explosion in Samarra, 95 kilometers (60 miles) north of Baghdad, in this Wednesday, Feb. 22, 2006.
AAP

Over the following two years, a sectarian Sunni-Shiite wave of killings and reprisals shook the country to its foundations.

“I lived in a mixed neighbourhood of Sunni and Shiite people,” she said.

“In 2007, a militia stormed the neighbourhood and handed out flyers ordering Sunni families to leave.

In the same year, she decided to flee the country. The UN estimated that 40 per cent of Iraq’s middle class fled the country with no desire to return. In 2008, the Iraqi refugee population surged to 4.7 million. More than 2.7 million of them were externally displaced.

Dr Alsadoon moved to neighbouring Syria where she picked up work as a lecturer at a private technology university. She then applied for asylum in Australia and was granted a ‘women at risk’ visa two years after applying. 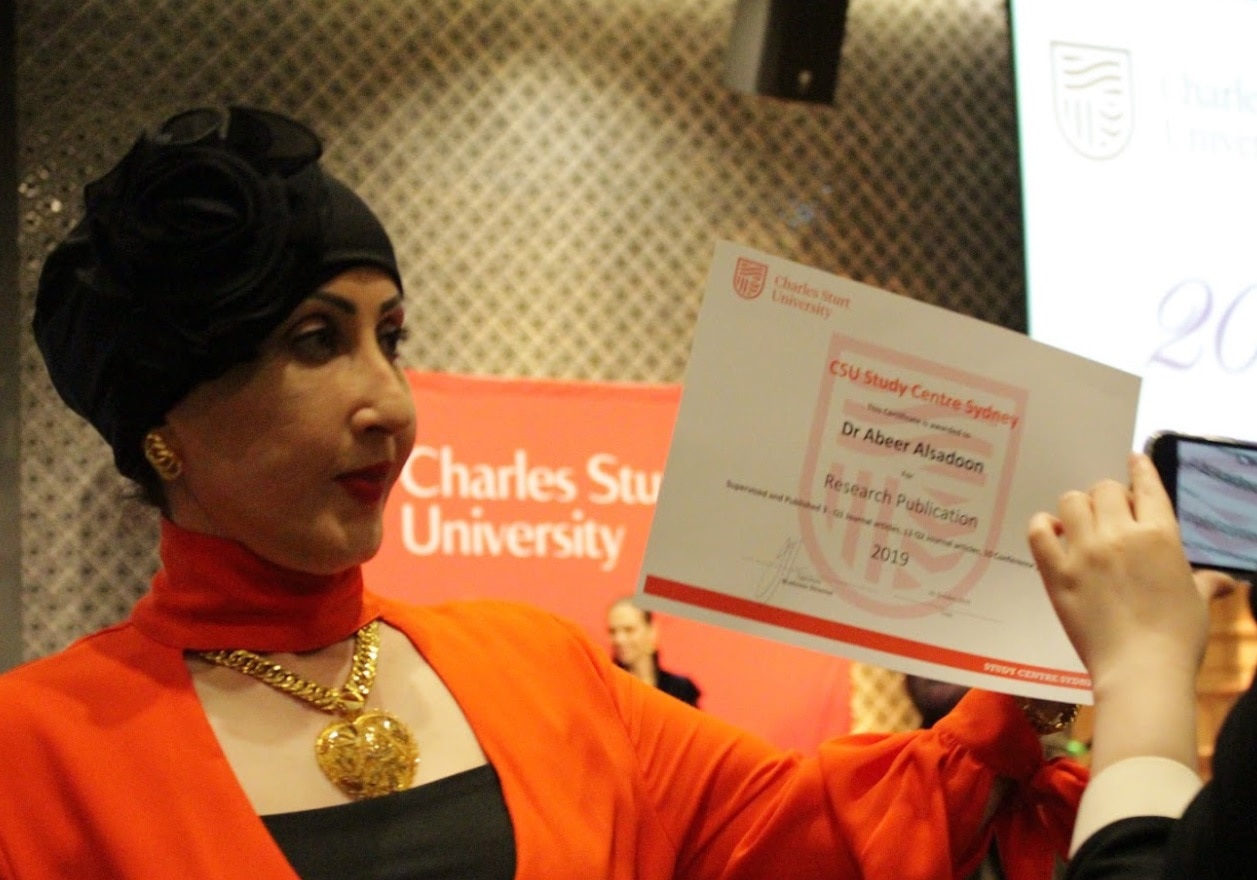 Family members already established in Australia formed the catalyst for her decision to relocate.

It wasn’t long until her degrees from Baghdad were recognised in Australia and she joined Charles Sturt University in 2013 as an IT and computer science professor.

Her work during this period focused on the technological application for the early detection of cancer.

But her career trajectory changed significantly in 2016 when she experienced a severe infection to the left side of her face, resulting in a number of drainage operations over the course of a year.

“It kept getting inflamed again. The surgeons were excellent but they couldn’t get rid of it,” she said. 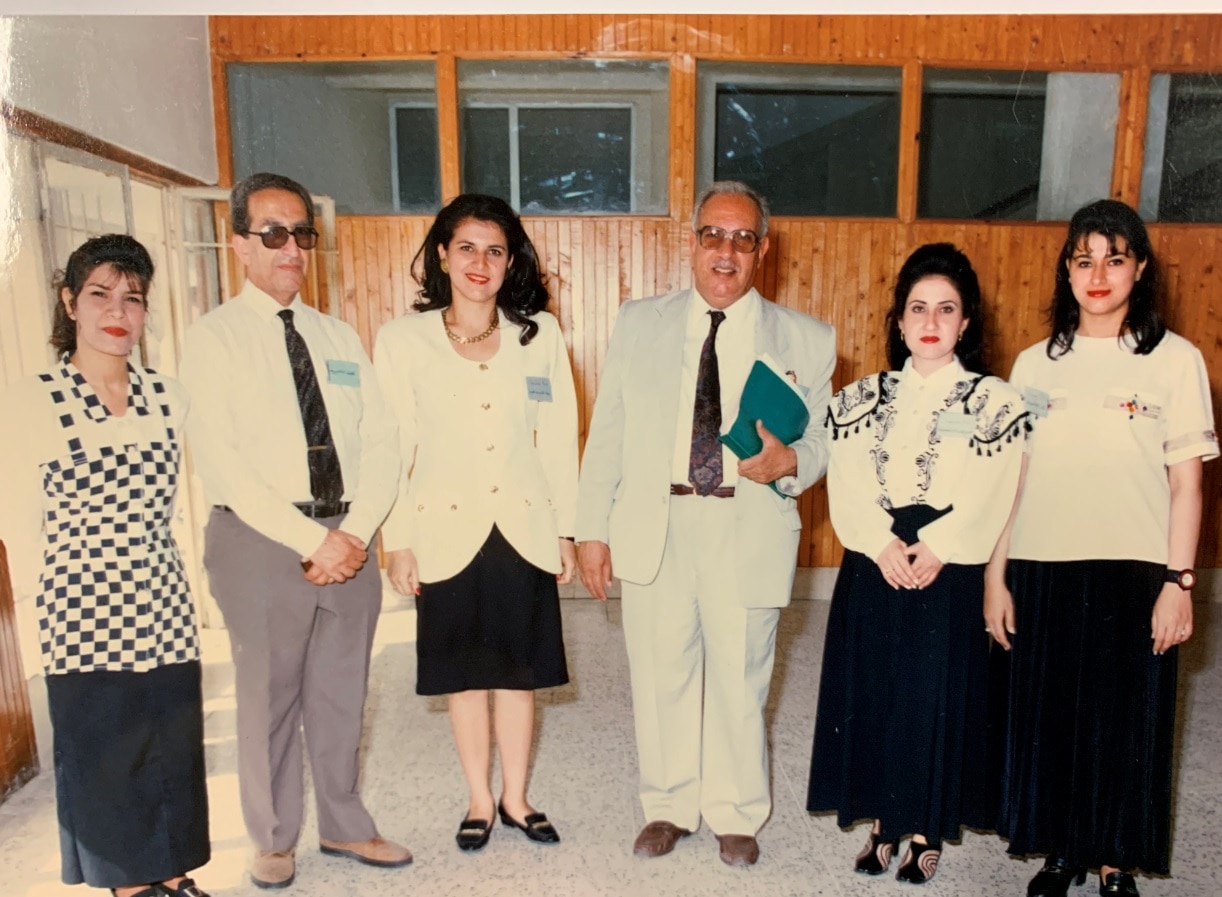 A lecture at the Baghdad university
Supplied

The mystery surrounding why the surgeries didn’t turn out successfully provided the inspiration for her to follow a new career path.

“They didn’t put me fully to sleep, and I realised that the surgeon can’t fully see the infected area inside my mouth. He had to feel his way around without actually seeing.”

Later that year, she hosted a guest lecturer via video link from Japan who talked about the application of augmented reality in different fields.

“After the lecture, I thought why not use this technology to solve the problem my doctors faced,” she said.

“I found out that there are only two research papers worldwide that tackled this.”

She then wrote her well-cited research paper about using augmented reality in oral and maxillofacial surgery. 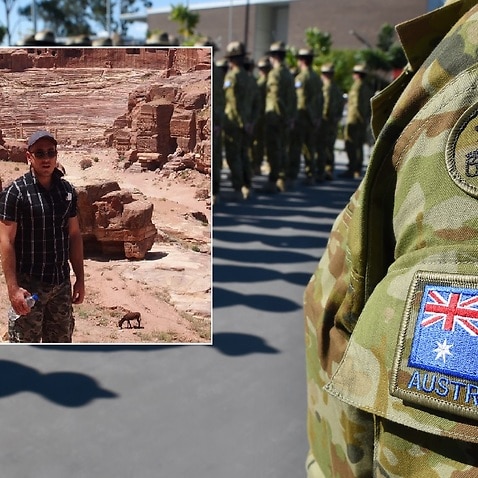 During her own treatment, Dr Alsadoon endured five reconstruction plastic surgeries on her face.

“My face was gone; the infection damaged the tissues and everything.”

She heard more from different doctors about the problems they faced while operating and it was this that led her to create new technological solutions.

“One cosmetic doctor told me he faces a problem with the breast implant because there is a vein that is very thin.” 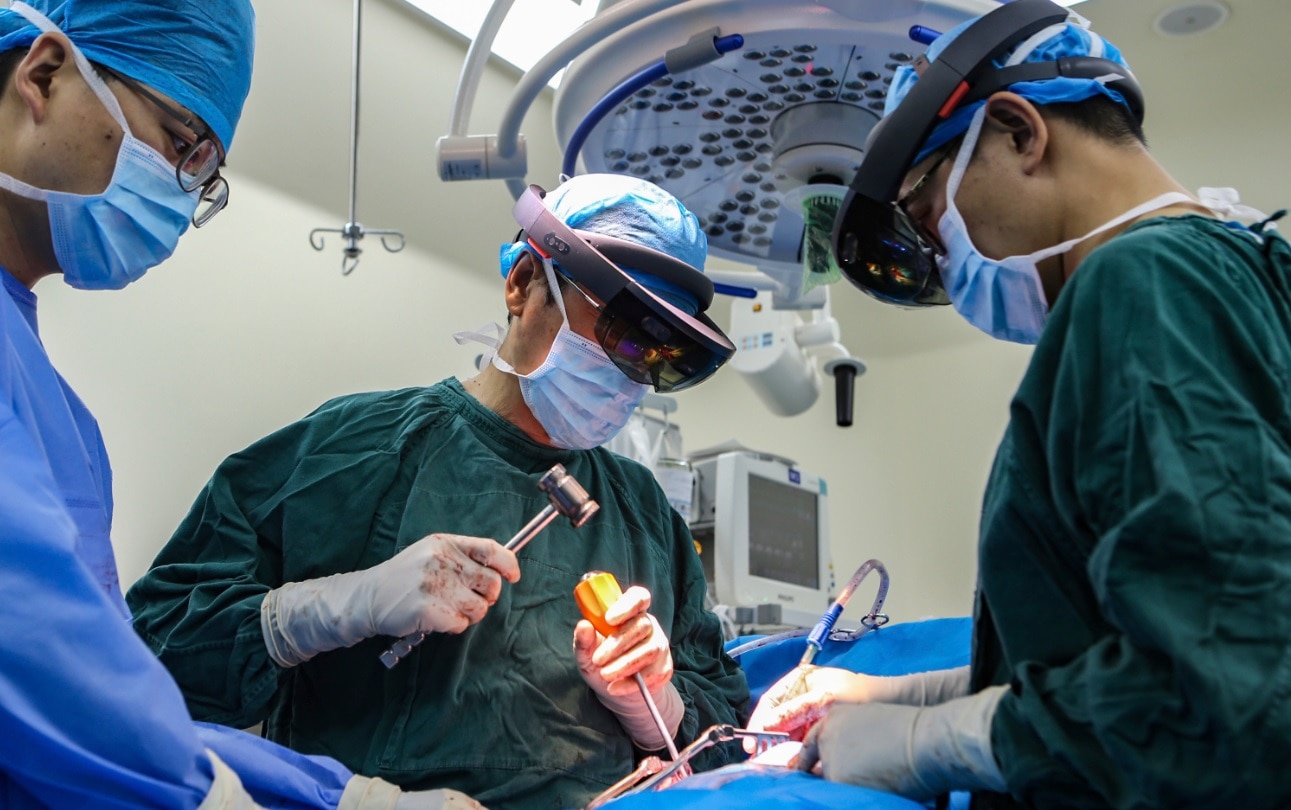 It was this dilemma that she addressed in her paper focusing on the use of augmented reality for visualising blood vessels in breast implant surgeries.

She began experimenting with mixed reality as well, which is the combination of augmented reality and virtual reality to undertake surgeries from two different locations.

“A local doctor will be with the patient sending out augmented reality visuals to the remote, more senior doctor,” she explained.

“Then the remote doctor will start to operate on the patient, and his movement will create virtual reality visuals to be sent to the local doctor to follow.”

The development of mixed reality technology can help with medical care in rural and remote Australia.

It can also improve the quality of medical care provided in some inaccessible places, whether it is a region experiencing conflict or underdevelopment.

“It is not just about creating solutions to generate the visuals, but also network solutions, real-time transfer and other technical issues,” she added.

“We [at Charles Sturt] are pioneers in working on augmented reality and mixed reality.”

Dr Alsadoon received many awards for her dedication and innovative solutions.

She was recently selected as one of five finalists in the Women’s Agenda Leadership Awards. She was nominated in the category of Emerging Leader in the Government or Public Sector for her contributions in public hospitals.

“This is the award I am most proud of because it is recognised on a national level.”

She said she's nowhere near finished in her pursuits.

“We are researchers, we will just keep researching and coming up with new solutions to challenges,” she said.

“In Australia, I received full support to grow and work. The support I received here was unlike no other.”