It was a tragedy that rocked the community. Now, months on from the Oatlands car crash, we hear from those closest to the four young victims, who speak of their devastation, forgiveness and the unwavering unity that has changed their community.

Nearly nine months have passed since Danny and Leila Abdallah lost three of their six children in horrific circumstances, and the devastation caused on that February day continues to be felt.

As you walk into the family room of their home in the Sydney suburb of Oatlands, you are greeted by the smiling faces of their three children and niece, whose portraits and artworks adorn the walls.

It is with a smile and a glint in their eyes that the parents look up at the photos of their children.

The parents spoke with SBS Arabic24 about that horrific day and its aftermath.

Siblings Antony, 13, Angelina, 12, and Sienna Abdallah, 8, along with their cousin Veronique Sakr, 11 were killed when a vehicle mounted the kerb along Bettington Road in Oatlands on February 1. The aftermath has not only been the story of a tragedy that reached into the hearts of the wider Australian community but also one that shows how the courageousness of two people can heal a community and cross cultural and religious boundaries.

“Imagine if I didn’t forgive, what could have happened that night?” Danny said, affirming that many people around him expected a different reaction.

The family are devout members of the Our Lady of Lebanon Maronite Catholic Church, and the parents say their faith has provided a path for them to navigate through unimaginable pain.

“God wanted to take my kids at that time, and in this way, this is what made us forgive,” Leila said.

“This is still our position, and in all honesty, I pray for the driver and pray for every person who was involved in the accident.” An image of the victim Veronique Sakr (left) and her mother Bridget Sakr praying in church.
AAP

They said they can feel a connection with their children through their prayers.

“I go to the scene of the accident and I pray. I love that moment, it is as if I have 20 minutes to spend with the children, I have their pictures, we pray and I cry, you know, I cry every day, I won’t say I don’t,” Danny said.

“My kids have died, but this means that they died in this life, but they are still alive in the afterlife, with Jesus and Mary and the saints, and they are living a good life,” Leila said. As the sun set over the first day of February, the Abdallah household was brimming with life as friends and family enjoyed a usual gathering.

At around 7:45pm, seven children set off from the house on foot to a nearby shop to buy ice cream.

“I heard my sister telling Danny if he was sure it is safe for the kids to walk, and he replied ‘what is the problem? it will only take five minutes, buying ice cream and coming back right away’,” Leila said. 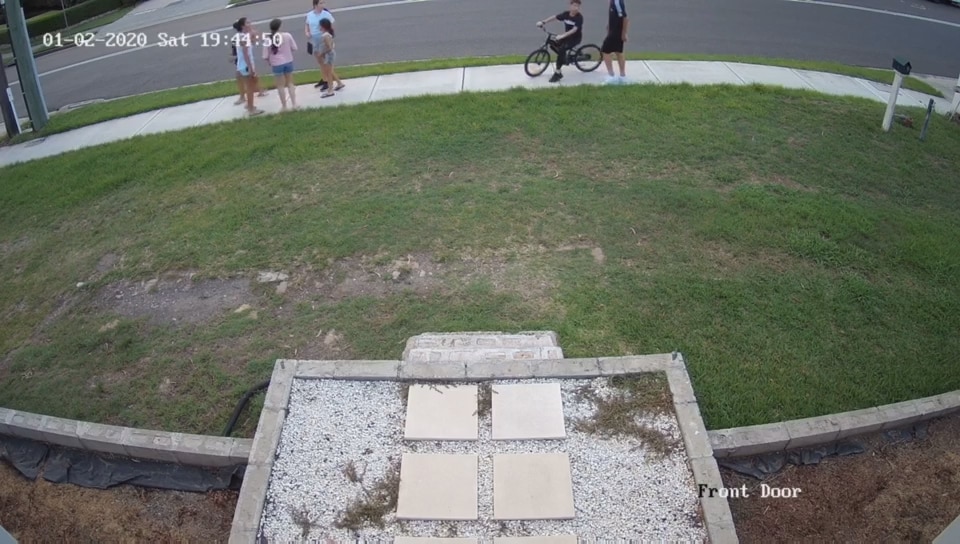 Security camera footage captured the seven children on their way to buy ice cream minutes before the tragedy.
Supplied

At around the same time, Samuel William Davidson, 29, got behind the wheel of his four-wheel-drive. Moments later, he lost control of his vehicle along the busy road.

On October 22, Davidson pleaded guilty to seven charges in relation to the crash, including four counts of manslaughter, two counts of causing bodily harm by misconduct in charge of a motor vehicle, and one count of aggravated dangerous driving occasioning grievous bodily harm while under the influence of drugs.

He had a blood-alcohol level three times the legal limit as well as MDMA and cocaine in his system at the time of the incident.

The parents were among the first people to arrive at the scene.

“Angelina was smiling, so I thought nothing was wrong with her because I saw my daughter smiling in front of me, but when I saw Sienna, I was in shock,” Leila said. “Then I saw Antony.”

Leila continued: “My daughter Liana ran towards me crying and said, ‘I don’t want to lose you as I lost my siblings’, I told her you won’t lose anyone, they are fine, Angelina is smiling.”

“In my mind, I was thinking positively, that they will all get up, and everything will be back the way it was. I didn’t think back then that this is the end, and my children have died.”

Danny said: “When I went there, I knew right away they were dead when I looked at the three of them and Veronique.” 'The tears haven't stopped’: Australia’s Maronite community in shock after losing four of their own

‘Something happened there bigger than me and Leila’

Neighbours and close friends to the Abdallah family, Mouhamad and Dana Dib, are still haunted by the sound of sirens they heard that night.

“The scene of the crash is very close to my house, I went out to see what happened, and a woman told me, four kids just died,” Mouhamad said.

“I kept walking until I saw Danny, called out to him and he told me, ‘I just lost three of my children’.”

Stricken by shock and grief, Leila’s father Michel Geagea knew he had to be there for his daughter and son-in-law.

“May God curse that night, it was a very tough situation, you want to support them, but you can’t cry, you are trying to be strong, but that means that you lie to yourself," he said.

“You feel lost, you can’t see your family like this, you just feel lost." The Abdallah children with their grandfather.
Supplied

In the midst of the horrific scene, and while people mourned and cried around them, Danny and Leila remained calm.

“People were screaming around us, but me and Danny we were very calm as if we were in a different world, it almost felt like we were there, but we weren’t there,” Leila said.

Danny said: “Being a dad, you catch your son if he falls, if he burns his hand, I will burn my hand with him. I mean, there are things you control with your kids, but I knew this was not for me to control, this is something where It was a speck on the Earth.”

“Something happened there bigger than me, and Leila. So, I surrendered to God, I said Lord, this is something bigger than me. You are in control.”

Leila’s father believes “children of death are always loved” but said his grandchildren were loved even greater.

“Sometimes when Angelina hugs you, and she had a strong build, you wouldn't believe she is only 11, you go straight to her heart.

“Everyone had their own way of joking, but the cheekiest was Sienna, oh Sienna.” People gathered to pay their respects at a makeshift memorial at the site of the incident.
Getty

Healing through unity and love

The tragedy saw a huge outpouring of emotion across the country and from all parts of the Arabic community.

Many took inspiration from the way the parents dealt with the grief, including neighbour to the Abdallahs, Angela Shehadie.

“To drive past the site with my children and see them, bless their souls, every day is very hard," she said.

“I try to be a little bit more understanding with my kids because somethings that we thought were important before clearly are not important now.”

What stuck out for Danny was how people of different faiths reached out to offer their support.

“Christians came and prayed with us, we got Muslims that came, we prayed together holding hands with love. Protestants. all walks of life," he said, recalling that he received a compassionate letter from a rabbi and from many atheists. 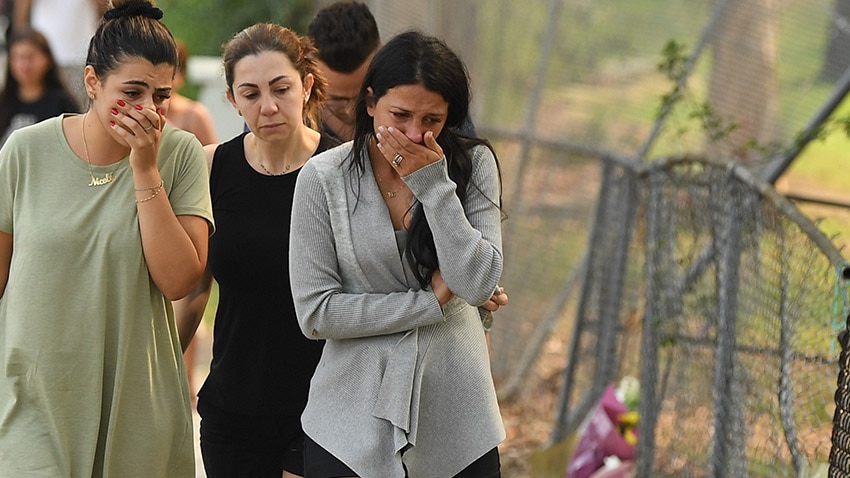 Leila Abdallah (C) at the scene of the incident in February.
AAP

“What I think these kids have done, they dropped all the walls and showed that we are all humans. Humanity came together, with all different faiths, and showed a lot of love and respect.”

Muslim man Rabi Deheini didn’t know the family but was so touched by the tragedy that he felt compelled to reach out at the funeral.

“We just had that connection I guess, just that moment where is he understood why I was there. where it came from? I have no idea, but It is just something that I felt I had to do.” Deheini and his wife were preparing to welcome their first child when they first heard about the crash.

“I recited the Quran [Al-Fatiha] for them, I stood with them, I just stood by them, while they were praying, so religion had really nothing to do with it.”

He said he was so inspired by the parents that he decided to name his newborn daughter Leila because he hopes she has “the strength and faith” akin to the mother. 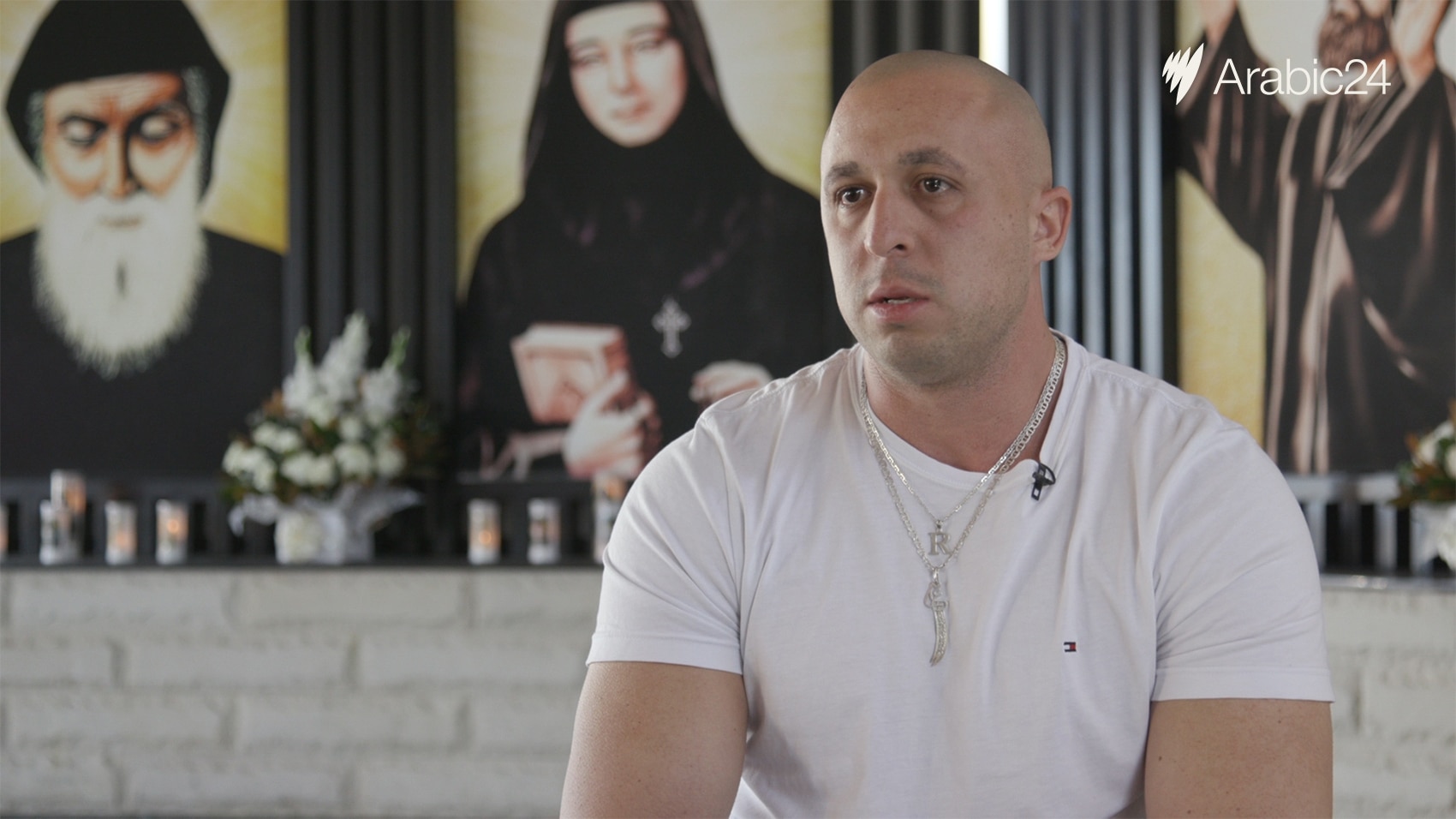 Rabi Deheini, a resident of Liverpool in Sydney.

Oatlands resident Lola Wakim said from the tragedy, she’s witnessed a positive change in how the community interacts.

“If we meet each other we say hello, we check on our neighbours, they do the same especially in these tough times of coronavirus,” she said.

“I make more effort to meet the people I met when we were praying for the children, this tragedy brought the Lebanese community in Oatlands together.”

Pierre Wakim, a close friend of the Abdallah family, said the tragedy provided a reminder not to take things for granted.

“We are all very busy in our lives, trying to provide for our families and keep up with the speed of the world and this made us all stop and just take some time and go what is really important.

The crash was also a “wakeup call for many people” to exercise safer driving, said Oatlands local and close friend to the Abdallah family, Daniel Mourad.

“It made me think about myself, and we always think we are okay to drive after a couple of drinks, now I think twice. Knowing you are okay or thinking you are okay, is not good enough anymore."

Immediately following the tragedy, Danny and Leila penned a letter where they pledged to forgive the driver.

Neighbour  Mouhamad Dib recalls that community members waited some time to make sure that the parents’ decision to forgive didn’t come because of their shock and grief.

“I spoke to Danny about that, about three weeks later, I talked to him when we were both in the car.

“I told him, Danny, now this is between you and me, do you really forgive him? and he said, ‘yes I do’.

“He told me why he forgives him and why he doesn't want to have a bitter house and how he wants to move on.”