Thabet Mekhail is working tirelessly to restore and rebuild ancient Assyrian artefacts that were damaged and destroyed during the devastating ISIS occupation of Mosul in Iraq.

Iraq’s second-largest city of Mosul is the location where the ancient city of Nineveh once stood, which served as the capital of the Neo-Assyrian Empire (911-609BC).

As a result, modern-day Mosul is rich with hundreds of historical and cultural sites that reflect several identities associated with the Assyrian culture.

However, when the Islamic State of Iraq and Syria (ISIS) occupied the city between 2014 and 2017, a number of the valuable Assyrian sites and artefacts were destroyed or badly damaged.

The ISIS campaign in Iraq had the intention of erasing the ethnic and cultural existence of several minority communities in the country, including the Assyrians. The ancient site of Numrud before (below) and after (above) it was destroyed by ISIS miltants.
AAP Image/AP Photo/Hissein Malla and U.S. Army via AP

Therefore, the fight against the fundamentalist group wasn’t limited to the battlefield - it was also a race to protect artefacts which had already survived for thousands of years.

Now, three years after ISIS was pushed out of Mosul, the job of restoring and rebuild the artefacts and statues falls on Assyrian sculptor from Iraq Thabet Mekhail.

He told SBS Assyrian the damage inflicted on these ancient cultural sites by ISIS was vast. A stone tablet with cuneiform writing wreaked by the ISIS group at the ancient site of Nimrud, Iraq.
AAP

When asked to assess the damage made to ancient and cultural sites, Mr Mekhail notes: "There are cities such as the ancient city of Nimrud that has been destroyed by almost 80 per cent".

"Some of the artefacts such as the Lamassu were hard to restore as they were shattered into more than 300 pieces."

When Mr Mekhail first visited the destroyed ancient cities, he said: “The situation was very unfortunate, it would make someone cry”. 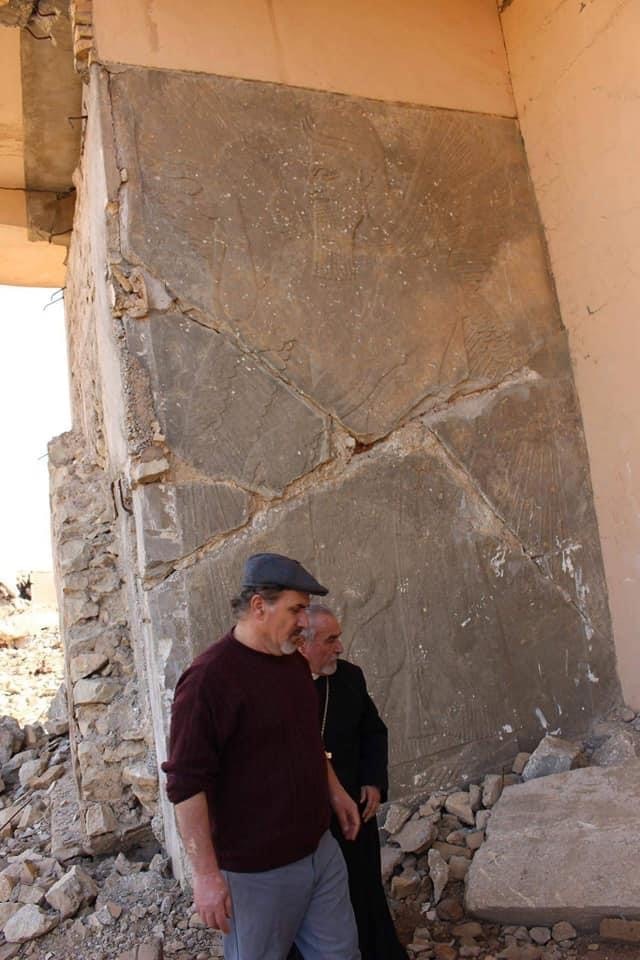 However, he said the resources provided by the government of Iraq to allow him and other experts to restore and protect the remaining ancient sites were insufficient

Mr Mekhail notes that an Assyrian palace was discovered under the mosque of Nabi Yunus (Prophet Jonah), but said the site is currently closed for security reasons. Sculptor Thabet Mekhail standing next to an Assyrian monument destroyed by ISIS in Mosul.
Supplied

He said many artefacts in the palace were stolen by ISIS fighters and sold through the black market.

However, they were unable to steal the large bas reliefs due to their size and weight, and because they were attached to the walls of the palace. Iraqi archaeologists believes tunnels dug beneath Mosul by ISIS may have revealed an ancient palace. (AAP)

Mr Mekhail said that not only ISIS but there have been other groups and individuals from within Iraq that aim to erase the culture of the Assyrians in Iraq.

"Assyrians in Iraq are targeted purposely to force them to flee the country." Ancient Assyrian pieces that he has restored that were damaged.
Supplied

In regard to current efforts to rebuild and reconstruct the damaged sites, Mr Mekhail said there are “rumours” about several projects, however, there is nothing solid on the ground due to the unstable situation in the country.

In particular, he said some of the organisations working to restore damaged sites included Italian NGO in Iraq Un Ponte Per, and other Japanese, American, and German organisations.

Iraqi archaeologist and former Minister of Culture, Tourism, and Antiquities, Abdulameer Al-Hamdani told SBS Assyrian, “Many efforts have been made to protect archaeological sites in areas that were held by ISIS”. He added that since 2018, the national and international efforts started to preserve the Iraqi heritage in Mosul and other cities in the North.

"We have started to collect data and we are working on the conservation of the Mosul museum," he said.

"Once the Mosul museum building is finished, we have this project with the Louvre museum in which we will display the artefacts."

As a sculptor living in 2020, Mr Mekhail said the art of sculpturing in ancient Assyria was fundamentally important in learning the art of sculpting today as it showcases how the art began and developed over the centuries.