After centuries of forced assimilation, Japan’s indigenous Ainu population, language and culture are emerging once more thanks to anime, the country’s thriving sub-cultures and YouTube.

Maya Sekine is a 20-year-old Ainu woman, cultural ambassador and YouTuber. She is passionately proud of her Ainu ancestry and culture, teaching the long dormant language to a new wave of people curious about the Ainu.

She tells SBS Japanese that Ainu culture beginning to flourish once again, thanks in part to people such as herself, but also thanks to the likes of anime series Golden Kamuy.

But before we go on, it’s worth taking a look at the Ainu people’s history and culture.

“The Ainu people don’t exist only in our history textbooks,” says Maya. “We blend into the mainstream society more than you think. We are so assimilated that you can’t tell who is Ainu or not.”

Originally inhabiting the Northern area of Japan, Ainu people once populated the northern Tohoku region, Hokkaido, Sakhalin, and to Kuril Island between the 17th century and 19th century, according to the Ainu Association of Hokkaido. Now most openly Ainu people live mostly in Hokkaido.

The decline of Ainu people and culture came as a result of a strict policy of assimilation introduced by the Japanese government in the late 19th century. Practicing Ainu customs and language were banned until only recently. Ainu people still suffer income and education gaps between themselves and the mainstream Japanese population. 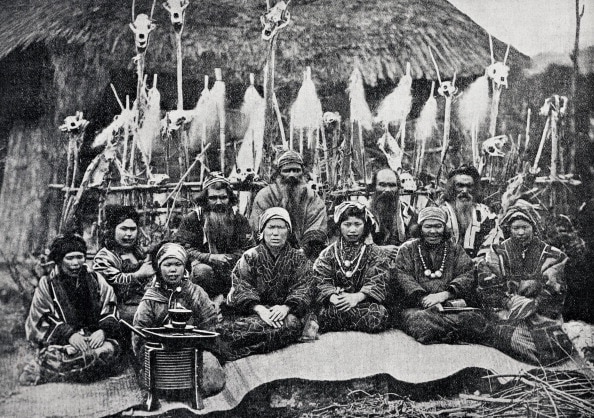 In the 19th century, Ainu were banned from speaking their language and practising their customs.
Getty Images

The Japanese government only this year took steps to officially recognise Ainu people as an indigenous population and grant them special rights to practice their culture, though many have criticised those steps as inadequate.

“The assimilation policy introduced by the Japanese government was so powerful and effective,” says Maya. “Many of us forgot our own culture and language. In terms of native speakers of the Ainu language, we have only a few people left.”

Japan's population is 126.2 million as of this month.  The country has a national census every five years but no data is collected on the Ainu ethnic identity to this day.

After centuries of cultural assimilation, it is believed that most Ainu people left their traditional lands and the population is now scattered throughout Japan. The Japan Foundation in Sydney

Maya now attends the prestigious Keio University in Tokyo, but she is originally from a small village called Nibutani in Hokkaido. The population of Nibutani is around 400, with approximately 80 percent of people being of Ainu descent.

Maya hasn’t experienced any explicit discrimination herself, and has come to think more deeply about her Ainu identity since leaving her small town for the big smoke of Tokyo.

“I started thinking about my identity after I left my village. Some people hide it because of the negative images from the past,” says Maya, who visited Australia this month to speak at the Japan Foundation Sydney.

“Instead of dwelling on my identity, hide it or not, I thought it was a good time to let people know how cool the Ainu are.”

“Times have changed,” she says. “Less and less people have negative images of the Ainu. When I tell people about my identity their reactions are usually positive. Some people even say they think it is cool.”

Ainu people and culture have gained more popularity outside Japan thanks to the popular animation series Golden Kamuy, which is set in Hokkaido and Sakhalin during the end of Meiji Period, the 19th century. The series depicts the Ainu language and culture in details in the story.

The printed comic book series stretches to 17 volumes so far and sold more than nine million copies as of March this year. They are translated and available in English, Chinese, French, Italian and Spanish. Its TV animation series was broadcast in Japan last year.

Indeed, the TV series is so popular and influential that Hokkaido businesses are cooperating with the animation studio that produces the show to promote local products such as beer and chocolate drinks. The Hokkaido Tourism Organisation also launched a promotion collaborating with Golden Kamuy in April, which will run for a year.

“Golden Kamuy stimulated young people’s interest in the Ainu tremendously”, Maya says. “The Ainu culture can reach a lot of people through fashion too. Like anime and YouTube, I think Japan’s sub-cultures will play a big role in terms of reviving the Ainu culture and language.”