Australian uranium was in each of the Fukushima Daiichi nuclear reactors that exploded in 2011 in the aftermath of the devastating earthquake and tsunami. On the tenth anniversary of the disaster, Traditional Owners express their continued concern and responsibility for the impacts of uranium from their country.

March 11 marks the 10th anniversary of the Great Eastern Japan Earthquake - an unprecedented "triple disaster" of record-breaking magnitude 9.0 earthquake, a massive tsunami that claimed the lives of at least 15,000 people, and a nuclear plant meltdown resulting in the evacuation of over 154,000 people.

Waves from the tsunami broke the sea wall of the Fukushima Daiichi Nuclear Power Plant causing nuclear fuel in three reactors to meltdown as well as a series of explosions damaging the buildings and causing radioactive material to leak. Despite the decontamination efforts by the Japanese government, well over 30,000 people are still displaced from their home towns, living in temporary housing, many making the difficult decision not to return.

Australian uranium was present in each of the nuclear reactors that exploded - from BHP's Olympic Dam in South Australia and the Ranger mine in the Northern Territory which ended operations in January 2021, according to the Australian Safeguards and Non-proliferation Office. "Aboriginal and Torres Strait Islander people have a deep cultural sense of obligation and responsibility for what happens on their land and the effects of things coming from their lands and waters," he says. In Australia, uranium is mined "against the deep and abiding will of First Nations people who have been custodians of their lands for over 70,000 years," says Dr Ruff.

"The rocks mined in Australia were turned into radioactive fallout and the continuing radioactive leaks into groundwater and the Pacific Ocean. This has caused great anguish for the traditional custodians of the land." 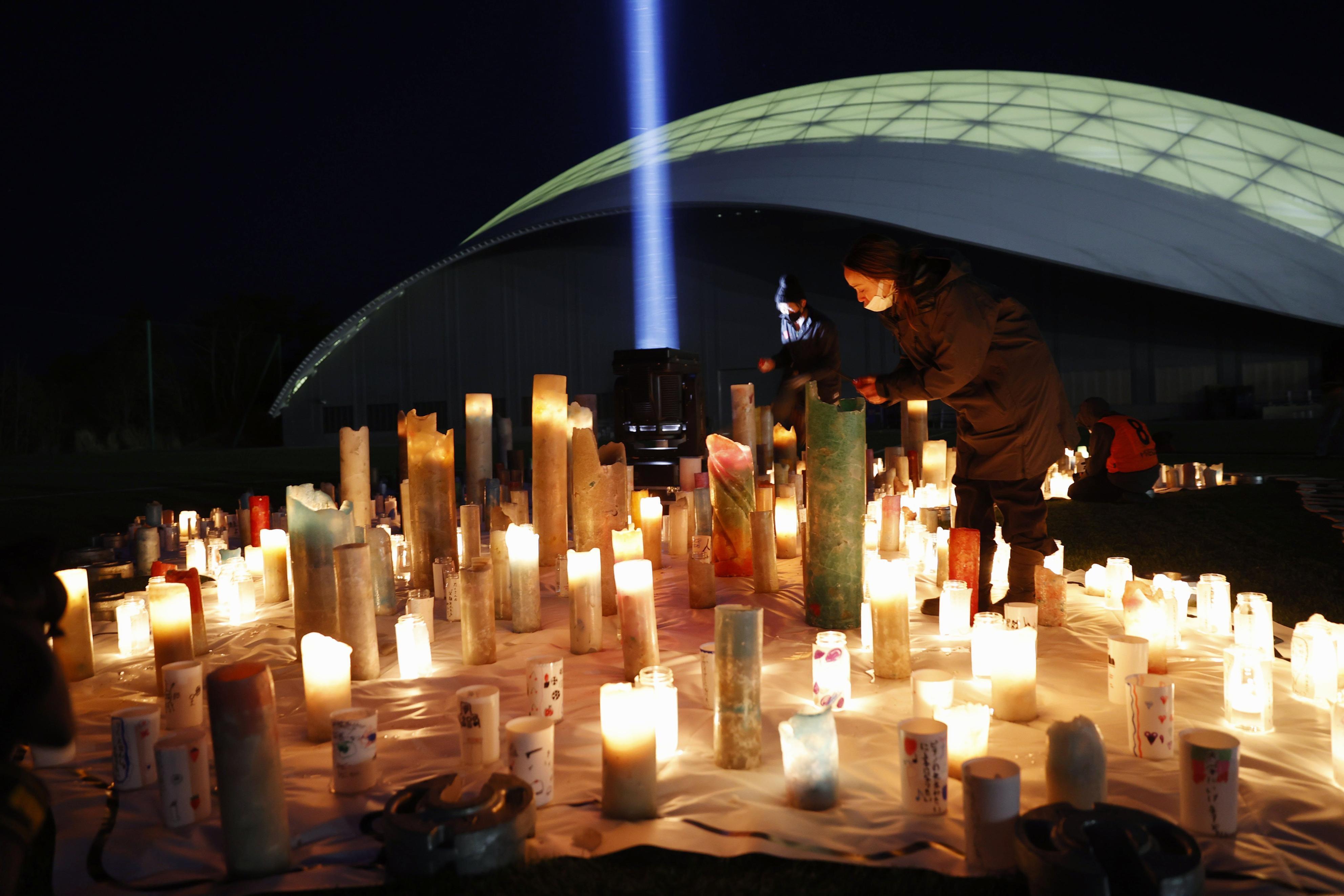 A month after the Fukushima disaster in 2011, Yvonne Margarula, a senior Traditional Owner of the Mirrar people of Kakadu, where the Ranger uranium mine was, wrote to the UN Secretary-General on behalf of her people, expressing their grief for the people of Fukushima, and their continued opposition to the nuclear industry.

Although there was not a formal response to the letter, many worldwide read it.

"It is important to share the connection between Mirarr country and this nuclear disaster," the Gundjeihmi Aboriginal Corporation, on behalf of the Mirarr clan, told SBS Japanese.

Mirarr want the world to understand the responsibility we feel for the impacts of uranium from our country.

"Mirarr want the world to understand the responsibility we feel for the impacts of uranium from our country",

Although the Ranger mine finally closed in January, the Mirarr people say they have lived with the effects of uranium mining on their land for over four decades. "We understand the dangerous and long-lasting effects first-hand.

"The Mirarr has a long-standing connection with Japan from the supply of uranium to the fantastic support the Japanese community gave Mirarr in our opposition to the Jabiluka uranium mine in the 1990s, through to our shared connection of the tragic events at Fukushima."

In 2014, the Mirarr people welcomed Japan's former Prime Minister Naoto Kan, who came to witness how uranium has damaged both Mirarr country and Japan.

"The Mirarr are saddened knowing that many people in Japan are still feeling the impact of the Fukushima nuclear disaster. Mirarr want people in Japan to know that you are often in our thoughts" Artist Kristian Laemmle-Ruff, Dr Tilman Ruff's son, has depicted the connection between the First Nations people and people of Fukushima. With the permission of local Kokatha elder, Mick Starkey, he collected red earth from the Roxby Downs and Olympic Uranium mine, and used it as a backdrop to the photo of a child in Fukushima, whose "childhood has been in radioactive cloud".
Kristian Laemmle-Ruff

Although the Japanese government has been painstakingly removing radioactive topsoils from all over the region, the question of what to do with it remains.

Emiko Fujioka, Executive Director of Fukushima Beacon for Global Citizen Network, says that "the radioactive wastes are just being relocated, and still exists. We are still surrounded." 10 years since the Great Eastern Japan Earthquake: Fukushima's lessons for the world 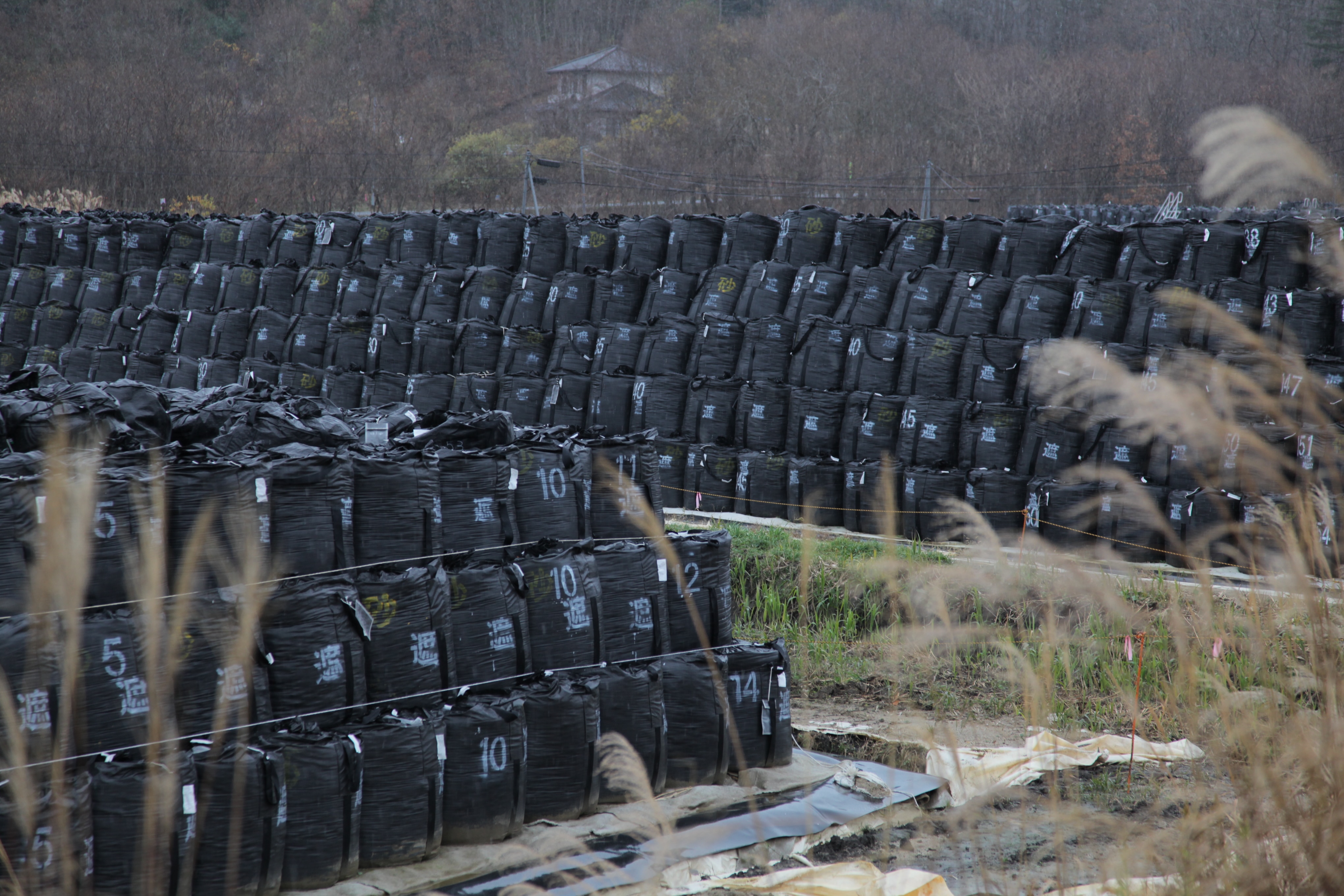 "The only way to prevent more Fukushima nuclear disaster or worse is to rapidly build energy efficiency and renewable energy and rapidly phase out nuclear power generation. And Japan has already proven that"

Japan had previously generated around 30 per cent of its energy from nuclear power before 2011.

However, with Japan relying on 90 per cent of its energy on foreign imports, and slow in implementing renewable energy compared to the rest of the world, there is a great task ahead for the government, especially with their aim to be carbon neutral by 2050.  Reliance on fossil fuels increased after the Fukushima disaster as public concern pushed all of the country's nuclear reactors offline temporarily.

Dr Jonathan Cobb, senior communication manager of the World Nuclear Association says that the shutdown of Japan’s nuclear generation has left it relying even more heavily on expensive and highly polluting fossil fuels, with three-quarters of its electricity being supplied by coal, oil and gas. 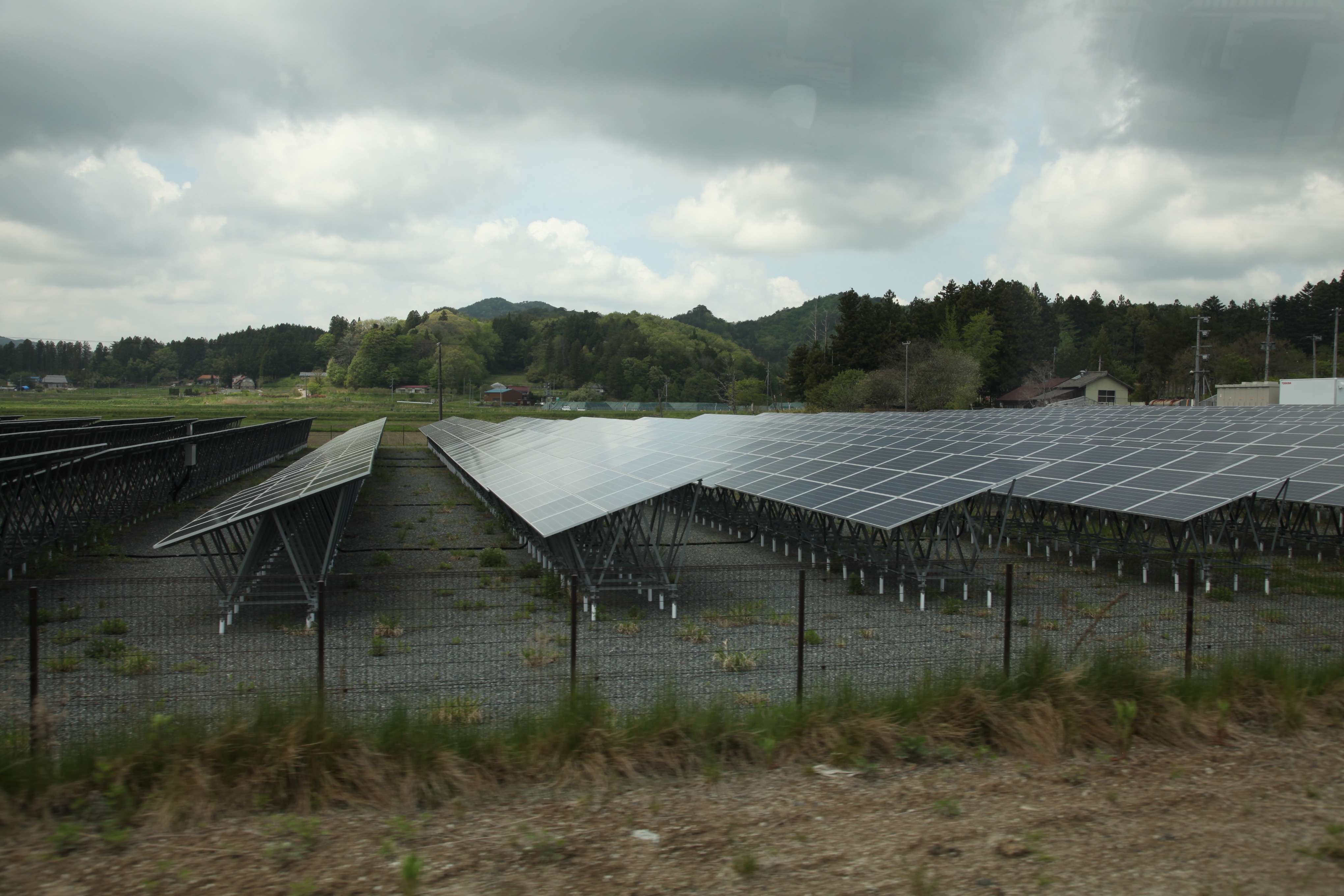 "Gambling on only using renewables to reach a net-zero generation mix by 2050 is an incredibly risky proposal," he told SBS Japanese.

"The main opportunities for growth in Japan lie in intermittent renewables such as wind or solar. However, with limited opportunities for further development of hydropower and energy storage in its infancy, this intermittent generation alone would not be able to provide a reliable supply of electricity that industry and consumers need."

Reactors in Japan are being examined in meticulous detail and are only being allowed to restart under a new, more rigorous regulatory regime, says Dr Cobb, pointing out that Hiroshi Kajiyama, Japan's energy minister, recently told the Financial Times that he considers nuclear energy "indispensable" if the country is to meet its target of reaching net-zero carbon emissions by 2050.

Australia is estimated to provide 40% of the world's economically recoverable uranium-rich deposits and accounts for 30% of the global trade of uranium. Yet, it is a "tiny contribution to the economy for all the harm it causes" says Dr Ruff.

The industry never exceeds $1 billion a year and employs no more than a few hundred. "This is less than our cheese and wine exports," he said.

"Australia should be a global powerhouse in renewables, rather than contributing to the dangers of radioactive incineration in a nuclear war, and the radiation harm to everyone's most precious legacy and inheritance - the DNA that makes us who we are."