Hazara activists from around the globe have joined a social media campaign calling for an #EndTo10YearsInLimbo for thousands of refugees stuck in Indonesia.

This article contains references to self-harm.

Boman Ali said he had no other choice but to sew his lips together.

The 33-year-old was one of several refugees who took part in the symbolic act of protest at a strike in front of the United Nations High Commissioner for Refugees (UNHCR) office in the Indonesian city of Medan.

Thousands of refugees have rallied in recent weeks, setting up camps outside the UNHCR and International Organization for Migration (IOM) offices in eight Indonesian cities, demanding more prompt assistance with their resettlement and using the hashtag #EndTo10YearsInLimbo to raise their voices.

The Hazara refugee fled Afghanistan seeking a life free of “discrimination, prejudice and security threats” before arriving in Indonesia in 2013. Boman Ali (3rd from the left) was among several Hazara refugees who sewed their lips.
Supplied/Hassan Nazari

Mr Ali is one of over 13,000 refugees in Indonesia - the majority of whom are Hazara refugees from Afghanistan - with no prospects of being resettled into other countries and no right to work, education and travel.

He was given refugee status by the UNHCR in 2014.

“The definitive answer of the representative and employees of the agency (UNHCR) to us is that 'it is likely that many of you will never achieve your dream or goal until the end of your life', and this is very disappointing for refugees in Indonesia,” Mr Ali told SBS Dari.

When we hear such a thing from the agency’s officials, we’re forced to resort to a series of things such as self-immolation, such as sewing lips and committing suicide

Thirteen refugees have reportedly taken their lives since 2013, 12 of whom are Hazaras.

Mr Ali said the latest wave of protests was triggered by the news of a Hazara refugee’s intention to set himself alight outside the UNHCR office in Medan.

“On 13 December this person went to the UNHCR office, he brought petrol to set himself alight, which fortunately those who lived with him in a camp noticed, and we started our strike from there. And, our strike enters its 32nd day today,” he said. Thousands of Hazara refugees have rallied and set up camps in front of the UNHCR offices in Indonesia in recent weeks.
Supplied/Hassan Nazari

“Unfortunately, during the 32 days that we have been sitting here, we haven’t received any acceptable response from the agency’s representative office here.”

Mr Ali said that UNHCR officials have repeatedly told them that being shortlisted for resettlement is “not a right, it’s a gift”, and when it’s a gift, they don’t have the right to protest.

They’ve also told the refugees that they should be “thankful” for the food and shelter they receive through the agency and IOM.

In a text message seen by SBS Dari, a UNHCR official told a Hazara refugee that “resettlement places are very limited in Indonesia”, encouraging him to “consider other solutions such as private sponsorship, education scholarship overseas, family reunification if you have family members/relatives overseas, job offers overseas or return to your country voluntarily if you feel safe”. 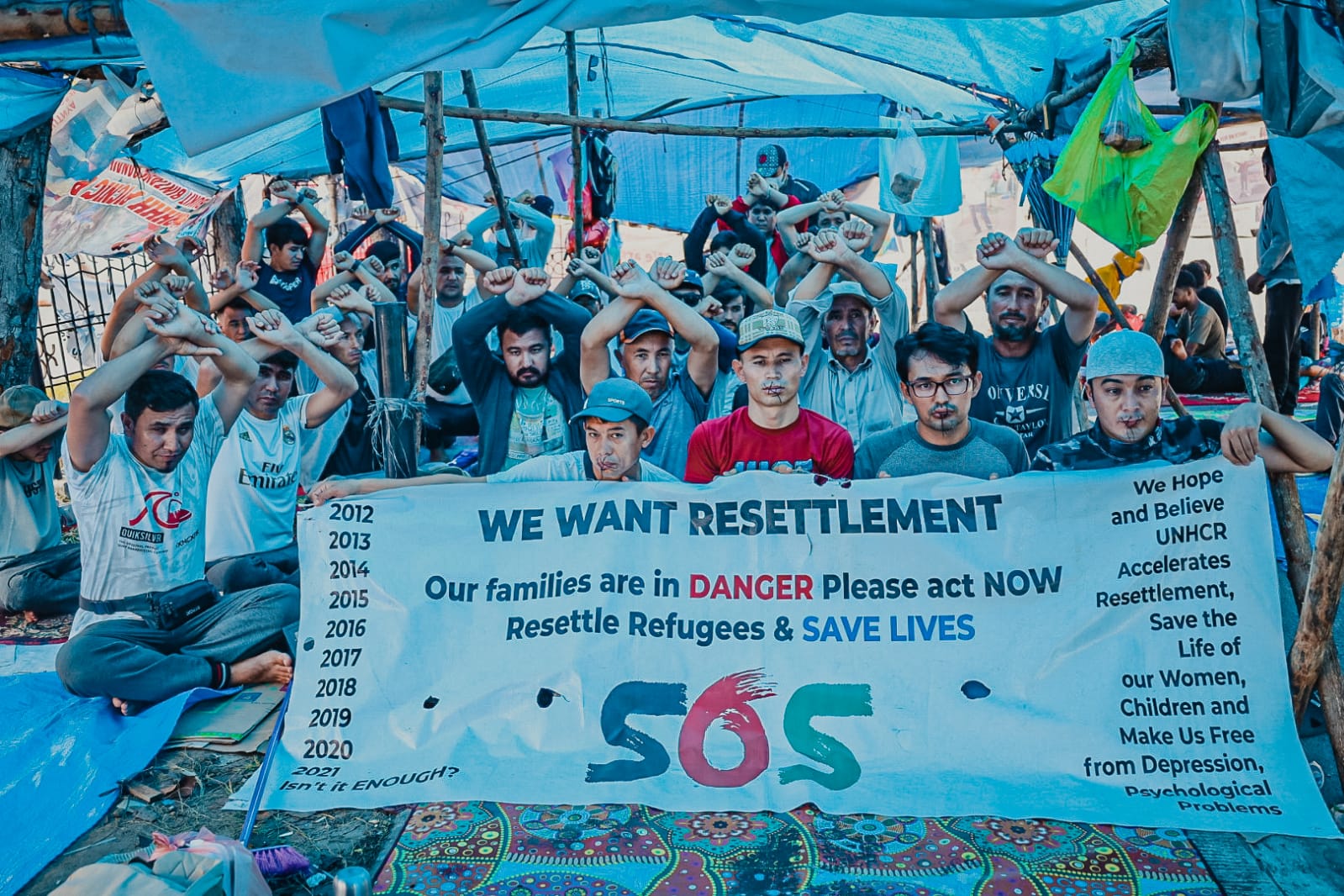 But those are options that Asadullah Amiri said most of the “abandoned” Hazara refugees in Indonesia don’t have, with their war-torn country in the hands of the Taliban.

The 30-year-old Hazara man, who’s also been living in Indonesia since 2013, said this is a tone that UNHCR has adopted since 2018 in response to their continuous protests.

“When we first arrived here in 2013, the UNHCR was telling us ‘don’t travel through water, wait here, trust us and we will safely send you to a third country',” he said.

Mr Amiri said refugees in Indonesia have been through a lot of hardship, mental and physical torture, and humiliation during the past eight years and they feel that they have nothing to lose.

“The refugee camps are just called camps, in fact, they’re real prisons. Inside the camps, refugees are completely treated like prisoners, they are being beaten.”

“These have caused psychological damage to the refugees. Refugees who get sick are not properly cared for by the IOM which is responsible for healthcare.”

Responding to the anger and desperation of the refugees in Indonesia, Hazara activists from around the world have joined the several-week-long social media campaign, hoping to make it a global trend.

Refugees said that since their protests outside UNHCR branches are being “censored” by the local media, the global campaign is their only hope, urging advocates from around the world to help them raise their voices internationally. The refugees have been sleeping in camps outside UNHCR offices for more than a month.
Supplied/Hassan Nazari

Sydney-based lawyer Atika Hussain said the refugees are stuck in Indonesia as a result of the Australian government's “deterrence policy” and agreements made with the Indonesian government and the IOM.

Under a bilateral agreement between Australia and Indonesia, the Indonesian government has agreed to intercept and detain asylum seekers bound for Australia.

“Under the agreement, Australia have been paying a hefty amount of money 2 the Indonesian gov’t to strengthen its borders,” she said in a series of tweets using the campaign’s hashtag.

“Why Australia invest[s] more into IOM Indo[nesia] and less in UNHCR? Because IOM isn’t a humanitarian organisation and most suitable candidate to carry out Australia’s “deterrence policy” under disguise of “border protection”.”

Asylum seekers in Indonesia have been detained in limbo for 10 years r the result of agreements between Australia, Indonesia and IOM. Under the agreement, Australia have been paying a hefty amount of money 2 the Indonesian gov’t to strengthen its borders. #endto10yearsinlimbo (1)

Australia announced in 2014 that any person who has registered their status as a refugee in UNHCR Indonesia after 1 July that year would never be allowed to resettle into Australia.

Mr Amiri said the refugees fled their countries because of the lack of safety, but “Australia’s policies, which work in collusion with the UNHCR as well as IOM, do a great deal of injustice to refugees”.

“It can be said that in 2013 and 2014, [resettlement in] Australia was a big hope for the refugees, and when Australia closed the sea borders and implemented the pre-July and post-July laws, refugees were aware of this, but they came to Indonesia anyway to go to a safer country,” he said.

“They came here just because they feared for their lives, and wanted to go to a country that upholds human rights, a country that’s safe so they can have a normal life, but unfortunately, the Australian government deprived them of this chance and shut its door on them and ignored a large number of human beings here.”

When reached for comment, the Department of Home Affairs didn’t directly address the issue of refugees in Indonesia but said, “transitory persons in regional processing countries or temporarily in Australia have durable migration options and are being resettled”.

“The Australian Government is working to ensure that visa options continue to be available to eligible Afghan nationals, through Australia’s long-standing Humanitarian and Migration Programs,” a spokesperson for the Department told SBS Dari, stressing that Australia’s policies on border protection and combating people smuggling remain unchanged.

“Processing times can vary according to the particular circumstances of the applicant, their location and their ability to travel, provide documents or access Australian government officials.”