Coming Up Wed 6:00 AM  AEDT
Coming Up Live in
Live
Arabic radio
More

Asylum seekers in three detention centres – Villawood, Yongah Hill and a Mantra Hotel – on Wednesday attempted to draw attention to what they say is a lack of protection and preparation against the coronavirus outbreak.

At a Mantra Hotel in Melbourne, which hosts around 66 asylum seekers on one floor, protest signs read, "We do not want to get COVID-19" and "We are in danger" and "What is our crime?".

In Sydney's Villawood detention centre, asylum seekers gathered and called on the government to ensure measures are put in place to protect them against the risk of contracting coronavirus. 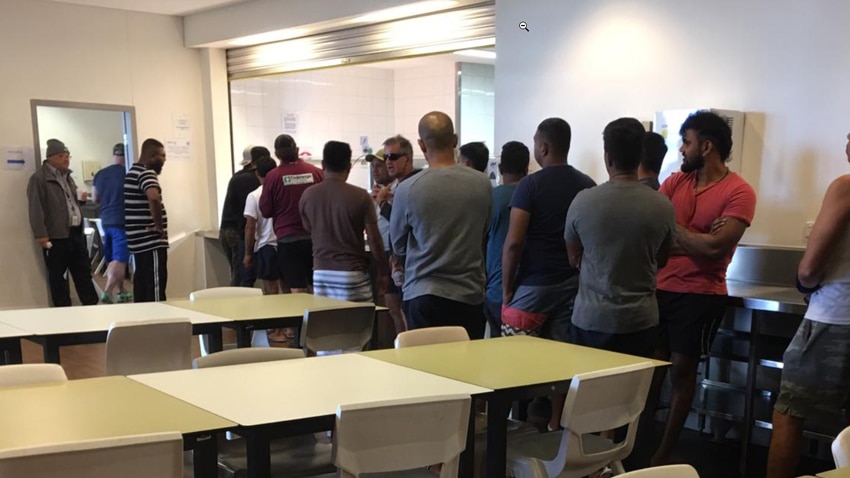 Asylum seekers in line to get food in Villawood detention center in Sydney.
Supplied

Issa Andrews, a 44-year-old Jordanian, is one of the protestors in Sydney's Villawood detention centre. He says two of his colleagues were taken by the paramedics days ago, and he worries they were diagnosed with COVID-19 as they haven’t returned.

The room where Andrews sleeps with two other asylum seekers is smaller than the space allowed by social distancing measures the government has recommended to curb the spread of the pandemic. He is calling on the Prime Minister to be released.

“Are they leaving us here to die? I am asking the Prime Minister to release us. Like what he is doing with the prisoners. Until the corona crisis is over.” 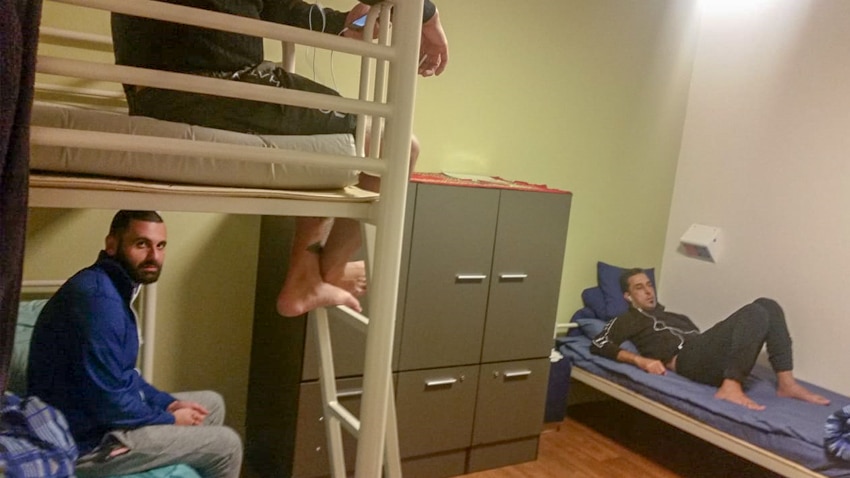 Detainees at the Villawood centre have sent a letter signed by more than 250 detainees to Prime Minister Scott Morrison. In it, they express fear of being infected by the virus and complain about the lack of space in detention. SBS Arabic24 has a copy of the signed letter.

Detainees at the Yongah Hill Center in Western Australia also asked for their conditions to be reconsidered. Tawfiq Sorour, one of those detainees, says, "The ministry is not interested in the well being of the detainees.”

“These rooms are crowded. This poses a great risk in transmitting the disease." "We are all locked up in one floor (at the hotel), 65 people. When we go to eat, they squeeze 20 or 25 people in the elevator, and this goes against WHO instructions… We want help, the guards work here without vests, without face masks or gloves."

In front of the Villawood detention centre in Sydney, a group of detainees' families and activists protested on Wednesday, demanding the release of the detainees.

Among the protesters was Jamal Dawood, head of the Social Justice Network, an NGO that works with refugees and asylum seekers. He says that the conditions inside the centre are “catastrophic”.

“There is a disaster awaiting detention camps now, we have information that there are cases of coronavirus inside the camp, there are at least two cases in Villawood who have been isolated … We saw more than one ambulance leaving the prison.”

Dawood would not reveal the source of his information about the two cases he mentioned, but called on the government to release all detainees held in the detention centres, and for them to be kept within their families' homes or to supervise their movements outside.

The families of detainees who gathered in front of the detention centres said they will not stop protesting.

"The families are determined to remain and escalate this demonstration, and will communicate with the opposition parties to explain to the Australian public what will happen if we ignore this humanitarian catastrophe."

SBS Arabic24 contacted the Department of Home Affairs for comment and received the following response:

“No detainees across the immigration detention network have tested positive to COVID-19. Infection control plans are in place and plan to manage suspected cases of COVID-19 have been developed and tested.”

However, the department has not confirmed whether any detainees have yet been tested for the virus.