South Sudanese woman Elizabeth Adau Lual escaped the war in her homeland in 1993. Ten years later, she and her children were allowed to live in Australia. Now she is helping young students in refugee camps with their education.

For many years, Elizabeth Adau Lual tried to escape the war in South Sudan. During one attempt in 1992, she lost four members of her family, including her husband and a child.

Her terrible ordeal didn’t end even after she managed to get to a refugee camp in Kenya.

'The worst that war can bring.'

When she applied to be resettled in the US, Europe or Australia, her in-laws resisted her attempt to take her children along, and she was arrested on false charges. Her two daughters and a son were forcibly taken back to South Sudan.

“I spent four days in prison because I was accused of trying to leave the camp with the children. When the UNHCR realised what had happened, they asked me to travel with their protection team to the Kenyan town of Loki, but my kids were already taken to South Sudan. I was devastated, and their safety was a major concern for me,” she tells SBS Dinka. The UNHCR’s protection unit handled her case, but it took a year before she could reunite with her three children who trekked 170 kilometres, from Lobone in South Sudan to New Cush then to Kakuma refugee camp in Kenya, with the help of another relative.

“My prayers were answered when these children showed up at the gate of the UNHCR protection unit in October 2001. I was shocked, and at the same time, I thanked God for uniting me with my children,” she recalls.

In 2003, she came to Australia with her three children on the ‘Women at risk’ visa to start a new life.

“I forgive those who treated me like that. My children have forgiven them too. It is time for us to help others now.”

'My turn to help'

In partnership with the Mothers’ Union of South Sudan in Uganda and Anglican Aid, NSW, she has been supporting Year 7-10 students in refugee camps where she spent many years before coming to Australia.

“As a mother and widow, I have seen the worst that war can bring. During one escape in 1992, I buried four members of my family, including my child, and this was not easy for me.

“I was emotionally drained and never thought that my children who survived the war would see a better life. If Australia has provided my children and me with safety, now it is my turn to help others. I need to give these children hope by supporting their education,” says Ms Adau.

I was suffering when I was offered a visa to come to Australia. My children and I needed help then, and it is our responsibility to extend that helping hand to other people. The Australian community has been very generous to us, and we have to do our part now.

According to OXFAM international and United Nations, Northern Uganda is hosting over a million South Sudanese refugees who escaped the war of 2013. Women, orphaned children, disabled and the elderly are reported to be the most disadvantaged group.

“What I saw in those camps was horrific, and it was the repeat of what many of us endured when we were in the refugee camp. I needed to do something when I returned to Australia.”

She mobilised the community for support and raised $27,000 to provide for meals and essential items for people in the camp.

She also started helping vulnerable children whose parents didn’t have the means to pay their school fees. Ms Adau joined hands with Anglican Aid once again and also received helped from Illawarra Grammar School that her daughter attended. The school donated over $10,000 for the cause.

“At the beginning of this year, we helped enrol 14 students from different tribal backgrounds into school, ranging from Years 6 to 10. This also meant providing each of the children with uniforms, textbooks and other school resources.” 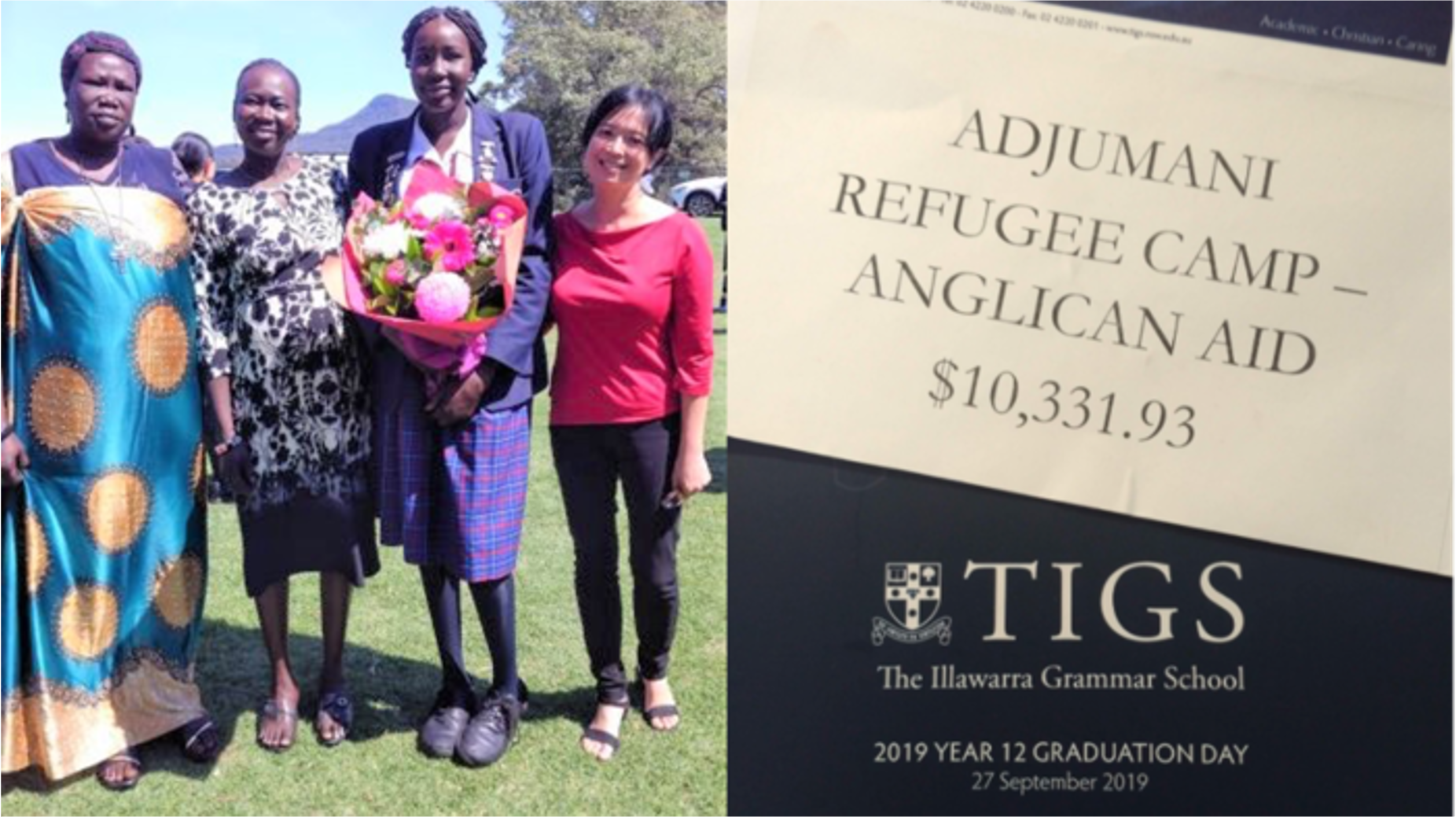 The recent war has divided South Sudan into different tribes. Ms Adau saw an opportunity to do her part in trying to unite the people of South Sudan, by supporting students based on their needs, and not whether they were all from her own Dinka tribe.

“I intend to help those who have difficulties, and it would make no sense if I only choose my relatives. The support that I got from Anglican Aid, Illawarra Grammar School and the community is to ensure that these children are given the space and the opportunity that they need in life,” she says.

Ms Adau says she doesn’t want any child to experience what she and her children went through during the war and in refugee camps. She says her motivation is to see these students stand at their own feet and live an independent life.

“I was suffering when I was offered a visa to come to Australia. My children and I needed help then, and it is our responsibility to extend that helping hand to other people. The Australian community has been very generous to us, and we have to do our part now. If these children succeed one day, they will see the help as ‘Australian help’.”