Driving is an essential skill to surviving in Australia. The process and time required to obtain a driver’s license varies in each state and territory. Young novice drivers tend to need a longer period to get their license, whereas mature drivers or those with an existing overseas license can often speed up the process.

Getting a driver’s license in Australia can be a lengthy and costly exercise. This normally starts with an eyesight test when applying for a test or license, followed by a Driver’s Knowledge Test.

New South Wales residents can sit the Driver’s Knowledge Test in Arabic, Chinese, Croatian, Greek, Korean, Serbian, Spanish, Turkish and Vietnamese. If your language is not in the list, you may be able to request an interpreter service for the test.

Drivers are issued with an L-plate after passing the Driver’s Knowledge Test.  This allows drivers to start taking lessons on the road. Before progressing to a practical test to obtain a restricted or probationary license – learners are required to pass a Hazard Perception Test that judges their ability to recognise potentially dangerous situations. Most states and territories need young drivers under 25 to log between 50 – 120 hours of supervised driving by an instructor or a person with a full license.  The number of driving hours required vary in different states and territories. 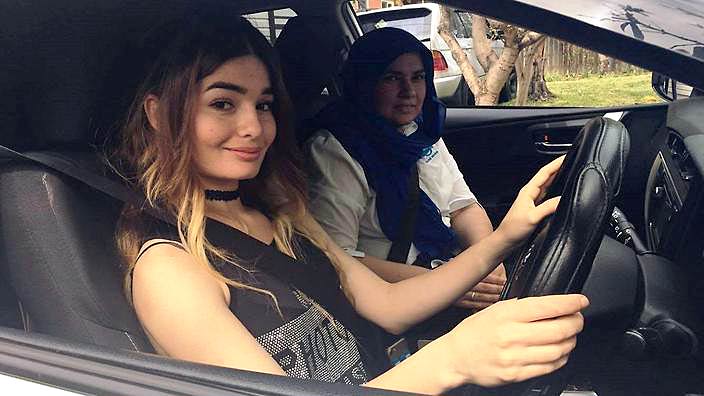 Babel Youkhana is trying to gain her driver's license after resettling in Australia eight months ago.
Rangi Hirini

Foreign nationals holding a current license from a recognised country or an experienced driver recognised country can convert their overseas license to an Australian driver’s license usually within three months after arriving in Australia.  The only exceptions are Tasmania where drivers will need to apply for an Australian license within three months from the date when their visa is granted, and Victoria, within six months from entry into the country or from the date the visa is issued.

Drivers holding a full license from ineligible countries are required to sit a driving test generally within their first three months in Australia.