A woman who was born in an orphanage in India and was adopted by an Italian couple at the age of two, is searching for her biological mother after 34 years. As part of her quest, she has intensified her search to Australia in the hope of meeting her mother at least once in her lifetime.

“Dear mum, my biggest dream in this world is to meet you. Only one time in life, just to see you if possible… please come back to me.”

In an emotional plea, Navya Dorigatti, has launched an intensive search for her biological mother and is asking her to come forward at least once.

Navya was born in Calicut, in the southern Indian state of Kerala, in 1984. However, she was left behind by her biological mother in an orphanage and thereafter was adopted by an Italian couple at the age of two.

Now 34 years on, Navya is in a desperate search for her mother whom she says left her behind as a baby. As part of her world-wide hunt, she has also extended her search to Australia where she believes her mum could be living.

Her search has been shared on various community groups on social media. "I was really curious to know about my mother. From then on, I have the desire to meet her once in my life,” Navya told SBS Malayalam.

As her wish to meet her mum grew, Navya travelled alone to India last year from Italy in the hope of getting some clues about her mother.

She contacted Indian media and the news about her search was published in a few Kerala media. However, as she could neither find her nor received a hint, she decided to extend her search worldwide through social media.

'I don't have any photo'

Navya whose name itself was a gift from someone at the orphanage, does not have any idea about her real mother. The documents she got from her adopted parents suggested that her mother’s name is Sofia and that she gave birth to her at the age of 19 in Calicut, India. She said that she also came to know that her mum stayed in an orphanage three months before her delivery.

“I don’t have any photo. Everything I know is that my mother’s name is Sofia and that she was a Catholic. I was born on March 31, 1984, in a hospital in Calicut and at that time she was 19 years old. She was with a lady named Thankammma. But we don’t know who this lady is,” adds Navya. 'My desire grew when I became a mum'

Navya says that her Italian parents took good care of her and that she had the best life since she arrived in Italy.  She is now well settled there with her husband and two daughters. It was after she became a mother herself seven years ago that her desire to know her own mother grew stronger. It was then that she intensified her chase.

So, I really thought about my mother and I thought Oh my god, I am a mother now and I have this happiness. So where is my mother?

“How she felt about me at that moment? Did she have the same feelings, the same happiness? Or maybe she felt sad?

"She might have felt some problems and I started to ask myself a lot of things and so I would like to meet my mother and ask her what happened on that day, how you felt that moment.” Navya suggests it was because of her mother that she, herself, got such a happy life.

So, while appealing to her mum to come to her, she is also thankful to her. In her plea, Navya also apologizes to her mum if her birth had troubled her.

'I am not angry with you'

“Actually, I am keeping a good life in Italy. I don’t need any money or anything else from my mother. But it is about feelings. If I was a problem for you, I am very sorry.  It is not my fault, it is not your fault. 'I believe inside me that she is alive'

Navya doesn’t even know her mother is still alive. However, she is very hopeful that she will find a happy ending to this year-long hunt.

“I am not sure if my mum is alive or not. But I believe inside me that she is alive. She is only 56 years and I hope she is keeping well. My heart tells me not to stop this search. Because, anyway, it is my mother and I am her daughter. And as a mother, I really believe a mother can’t forget her first baby.

"So, I really hope she didn’t forget me. Even if she has seen me one second, I believe that that second was important for her.” 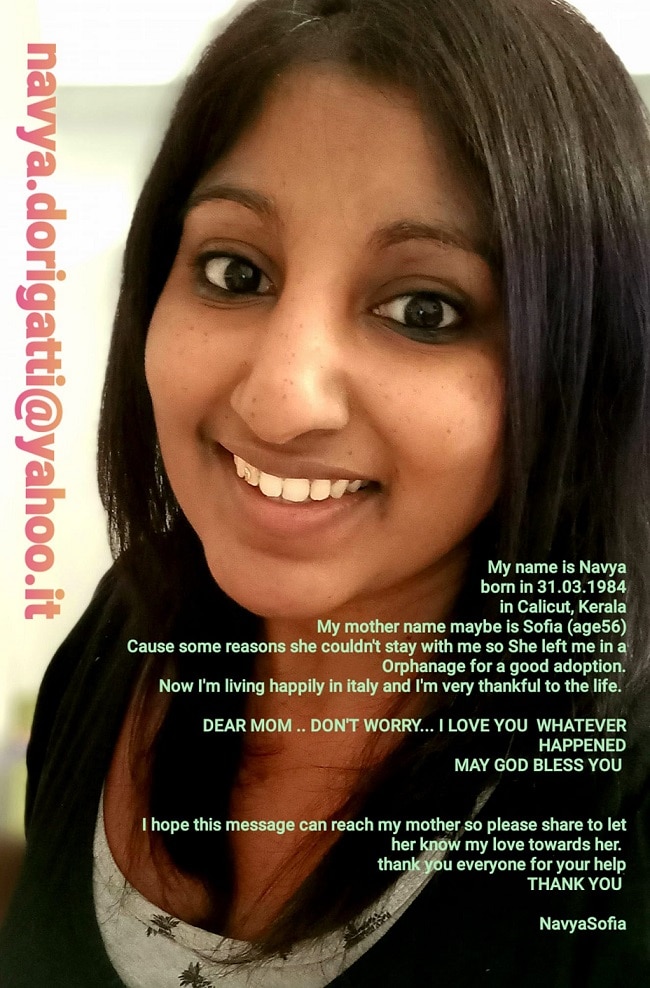 Receives mail to stop the search

Meanwhile, after she started her global hunt, very recently she received an email asking her to stop continuing the search. However, she does not know who or from where that mail came.

“The mail was from a man who said 'Please Navya please stop searching because you will hurt the family. So stop to hurt the family please',” says Navya.

However, Navya is going ahead with her hunt and is promising her mum to keep their meeting a secret if she wants to.

“I think maybe now you have a new life for sure," Navya says.

"Maybe you also have a husband who doesn’t know anything about your past. So you are a little afraid to come back to me. But if you come back, I will not tell to anyone. Nobody will know about that. Only me and you will know. If you can please give me this possibility to see you only one time in my life,” she adds.

Navya also appeals to her mum and shares her story in Italian.