A Gold Coast mosque is running an initiative to ensure that worshippers and non-Muslims feel a sense of togetherness while also following social distancing protocols.

During the holy month of Ramadan over the past two decades, hundreds of visitors to the Islamic Society Mosque on the Gold Coast would break their fast together inside their place of worship.

More than 900 worshippers would usually gather over the weekends during the month to pray, eat, and meet others from the community.

This year, however, the COVID-19 pandemic has put a stop to all mosque activities, and like other places of worship, mosque doors were forced to close.

“Ramadan came with coronavirus,” says Hussin Goss, a Gold Coast resident and one of the mosque founders.

“All the things we do in Ramadan came to a stop, prayers, Tarawih, and the Iftar.” Hussin Goss, the founder of the drive-through Iftar service.
AAP

However, volunteers in the mosque’s kitchen were not willing to give up that easily.

Mr Goss, who works in the field of food logistics, came up with a plan for people to visit the mosque, while still abiding by social distancing measures.

He proposed for the mosque to prepare food for the Iftar, the first meal following the day of fasting, and to distribute them using a drive-through system.

"You have a service ordering food from the car at McDonald's, and we have a service to order Iftar from the car,” says Mr Goss, who was born and raised in Queensland to Australian parents and a grandfather who migrated from Pakistan.

Initially, others at the mosque thought the initiative would be too difficult to take on due to the strenuous efforts required. 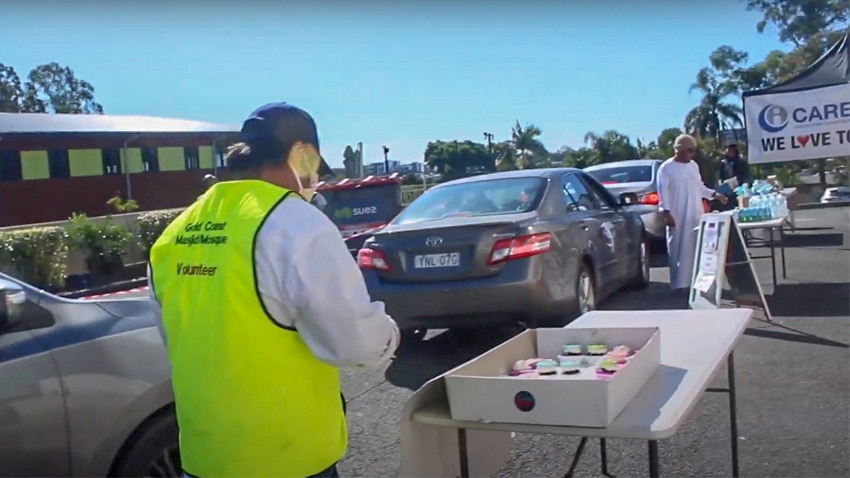 The initiative requires preparing the Ramadan Iftar continuously for thirty days straight, with no breaks, and while people are fasting themselves.

But Mr Goss persuaded two of his companions to work inside the kitchen in the courtyard of the mosque.

Using word of mouth and social media, the proposal became a reality once Ramadan began, and cars started lining up day after day in front of the mosque to receive free meals.

The line of cars has been continuous throughout the month in the mosque’s courtyard.

There are three food stations in the courtyard: on the first table boxes of sweets and water are available, then the car moves towards a table of rice, chicken or meat with curry sauce, before finishing at a fruit station.

Each day, the initiative costs an average of $1700 to prepare more than 500 meals.

Food preparation starts at dawn until 2:00pm when the meals are set up ahead of sunset when the Iftar is observed.

There are currently six volunteers facilitating the initiative, including Mr Goss.

Those lining up each day are a diverse group of local residents.

"We have two universities on the Gold Coast with many international students,” he says.

“Currently these students do not work, there are no Uber cars to drive, no restaurants to work in, so half of the meal seekers are students and the other half is the Muslim community.” “Of course, whoever comes gets a meal, Ramadan is about giving, and in past years we have been inviting the mosque’s neighbours, policemen and politicians to share a meal with us, we have been doing this for 22 years."

After handing out the last container each evening, Mr Goss says he feels relieved.

"It is a little bit satisfying, I have achieved something for the day. All of us have done wrong, and at the end of the day we only need to do some good to help each other, and in this funny word at the moment we need to do a lot more of it."