The Mascot Towers debacle in which apartment owners were forced to evacuate the building has led to a raft of legislative changes, yet the 132 unit owners say they have been left forgotten. Now many who were once "silent" have come forward, ahead of a vote to decide their future, as a last plea to the government.

June 14th will mark two years since the residents of the Mascot Towers were abruptly told to evacuate their apartments due to structural concerns.

Engineers became concerned after discovering cracks in the basement of the 10-storey block on Bourke Street just south of the CBD.  Yet since then, the unit owners have continued to pay their mortgages, levies and insurances, for a ghost building that cannot be occupied or sold.

"It is breaking families," says one Japanese unit owner, who wishes not to be named.

People are depressed, couples have divorced, some are in a state of denial.

It's a complicated issue even for native speakers of English, and for many immigrant owners, they say it has just been too overwhelming. Many have kept quiet for the past two years, afraid of jeopardizing the litigation as well as the risk of defamation. But now, many have come forward one by one.

"I feel like this is the last opportunity to make noise," says a Japanese owner, who has occupied her unit for 10 years.

SBS Japanese understands that the Mascot Towers was more than six years old, and outside of the builder's warranty when the defects began appearing.

The developers have gone into liquidation, and although $15 million has so far been used for remediation, the building is now said to be "financially not viable".

The progress has been slow and every day is money.

“Something like this has never happened in Australia, so there are no laws to protect us. The strata law make us owners have unlimited responsibility,” says Alex Chan, who bought his unit 10 years ago.

The owners must now vote to decide on the fate of the tower - collective sales which will still incur a loss of 70-80 per cent of the original price. For the majority, though far from ideal, a collective sale is the only way to end this ongoing nightmare.

"I just want to move on with life and have certainty," says a young mother whose child was only two months old at the time of evacuation.

"The possibility that all 132 owners will be bankrupt will be real if collective sales don't go ahead," says an airline worker, who only resumed his job recently due to the pandemic.

But for others like Benjamin (not his real name), it is "nothing but a death sentence" and is strongly against the sale.

"I will be half a million dollars in debt, and homeless."

Benjamin has strong hopes for winning legal action against the developers of the neighbouring building, which will "bring down the repairing cost drastically, making it more financially viable." Residents of the high-rise in Mascot, in Sydney's inner-south, were evacuated as a precaution after cracks were discovered in the building.
AAP

The owners' cooperation will require 75 per cent in favour for a collective sale to go ahead, however, with 132 unit owners all in various financial situations (depending on when the property was purchased) and life stages, agreeing on anything is near impossible, especially without a compulsory strata manager.

'All voices need to be heard'

"Everybody is fighting for their own interests," says Benjamin, who feels that there is a high tension amongst the owners, such that voicing anything that goes against a collective sale is met with unwelcoming reactions.

The group of dissenting owners are feeling "uncomfortable" with the strong push for sale.

” It's not for the best interest of everyone.” "All voices need to be heard," says another dissenting owner who had only bought the property months leading up to the evacuation.

"If collective sales go ahead, those who should be held accountable will be celebrating with champagne. It will be case closed"

The owners, however, agree on one thing, that "the government needs to step in".

"We are everyday ordinary people left on our own to fight," says a young Chinese mother.

"The government needs to lead us here," says the airline worker. Apartment owners at the Inquiry into Regulation of Building Standards, Building Quality and Building Disputes at NSW Parliament, August 12, 2019.
AAP

Shake up in the industry

The event has spurred the government to act, providing some confidence for prospective buyers.

Legislative changes include the Residential Apartments Act 2020 and the Design and Building Practitioners Act 2020, as well as the appointment of David Chandler OAM as the NSW Building Commissioner. The Act, in short, provides the commissioner with the powers to stop 'dodgy' construction.

However, the Act covers buildings not yet completed, and those completed within 10 years of the order, making the Mascot Towers just two years short.

The commissioner declined to comment when approached by SBS Japanese, stating "this is not a matter for me, it is in litigation."

"Those strong words by Gladys Berejiklian were nothing but just pretty words", referring to the premier's comments at the time of the evacuation, that the government will "hold everybody to account", that this was "the government's role".

The New South Wales premier had, in fact, announced reforms four months earlier, in February 2019, following a similar incident at the Opal Tower at Sydney Olympic Park. The 36-storey apartment complex was evacuated on Christmas Eve after cracks started to appear in the building.

"It's like you are investing everything on Covid vaccines, and leaving those infected to die," a young Chinese mother said in tears. Structural support is seen in the basement of the Mascot Towers in Mascot, Sydney, Saturday, June 15, 2019.
AAP

"The residents should not have to pay for the failures of governments and the negligence of private developers and certifiers, losing hundreds of thousands of dollars while the developers face no sanction or legal requirement to fix their shoddy construction," says NSW Greens MP David Shoebridge.

"This is the legacy of decades of Labor and Liberal governments allowing developers to write the rules for building and construction in New South Wales.

“I firmly believe there is an obligation on the state government to step in and assist, and that includes direct financial assistance and bringing others around the table so that residents don’t bear all the pain. None of this was their fault,” Mr Shoebridge said.

For the past 18 months, the NSW government has "provided residential accommodation assistance of up to $400 a night to help owner-occupiers and tenants with the costs of emergency accommodation" says Minister for Better Regulation and Innovation, Kevin Anderson. It is "now approaching $7 million" he spoke to SBS Japanese.

However, "$400 per night is for a  three bedroom unit, which only covers a handful of owners," says the airline worker.

For investors, they have seen "zero cents".

"There may be a general consensus in society, that investors have money," says the Japanese investor. 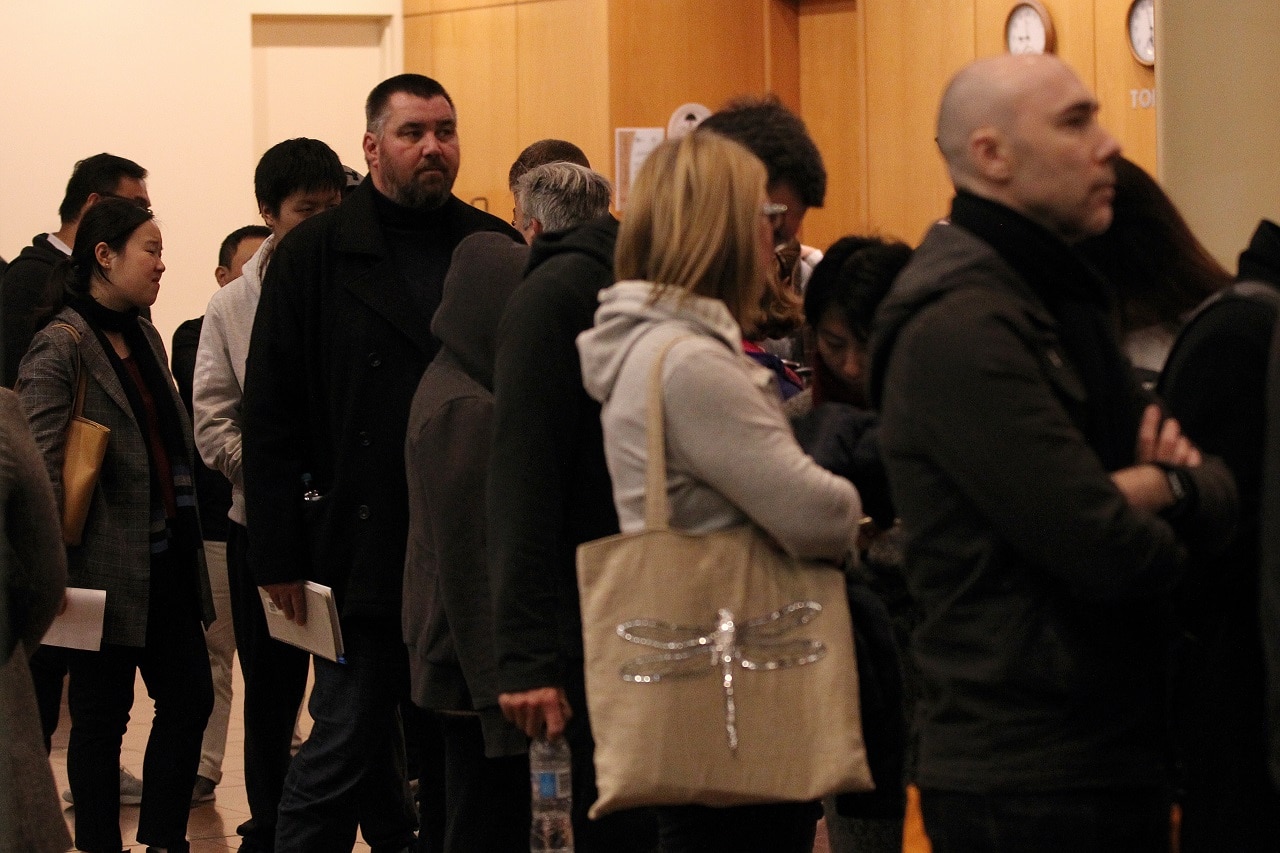 "But that is not true for everyone. Some people who own an investment property may be renting themselves."

"With no end to this, I am just throwing my money into a bottomless pit, and is extremely stressful," says Jamie Lam.

"The government does not own the building, and our role is limited to providing technical advice and accommodation assistance for residents' says Kevin Anderson.

"Decisions about a possible sale of the building are a private matter for the owners' corporation and we encourage them to not delay a decision any longer."

According to Fair Trading NSW, the accommodation assistance must be repaid at a later time, if they receive compensation from insurance or other means.

Currently, the assistance is approved until the end of September 2021. A crack is seen in the structure of the Mascot Towers in Mascot, Sydney
AAP/BIANCA DE MARCHI

How can future buyers protect themselves?

There are currently 1.1 million people living under strata schemes, and by 2040, it is expected that half the population of Greater Sydney will be living in strata-titled apartment towers, townhouses and blocks of flats. So how can future buyers protect themselves from disasters like the Mascot Tower?

A practitioner at the NSW Bar, Patricia Lane says, although it will depend on how old the building is, "looking at strata records will allow you to know what you are buying into, and estimate the risk".

These reports are long and complicated, and so it is essential to have someone who is able to interpret them, "to identify any area of potential risk and know the history of the building."

Unfortunately like the young couple of the Mascot Towers, who had done thorough due diligence, just two months prior to evacuation have found, the system is full of holes.

The owners will now vote for the fate of the tower, ultimately deciding on the lives of 132 owners and their families.