“It’s like I witnessed the funeral of a living person,” Nikolaos Soutos, former vice-captain of the iconic Greek ship 'Patris' describes the moment the well-travelled migrant ship was finally retired.

This year marks three decades since the Patris was towed to the ship breakers in Karachi. This ship brought tens of thousands of Greek migrants (and other nationalities) to Australia from the late fifties to mid-seventies.

“It may be an exaggeration, but my impression was that this goodbye was like the funeral of a living person,” the ship’s former vice-captain Nikolaus Soutos tells SBS Greek.

He explains that those that travelled aboard the vessel felt a powerful connection to it, “Because no one knew where they were traveling to - they were to be thousand miles away from their families, [they didn’t know] if he or she would come back home ever again.”

Their families travelled from their villages at Piraeus port, near St. Nicolas Church, to say goodbye to them, hoping, but not knowing if, they would see them again sometime.

Nikolaos Soutos, now a successful businessman, recounts the moments of the first voyages of the famous ship.

The Patris left Piraeus, Greece for her first immigrant voyage to Australia on 14 December 1959. The first stop was Fremantle on 2 January 1960 followed by Melbourne on 7 January.

The vessel, which was originally named ‘Bloemfontein Castle’, began her life carrying passengers from London to Cape Town, South Africa for the Union-Castle Line.

In October 1959, she was purchased by Chandris Line and christened “Patris” - the Greek word for ‘homeland’.

“While I served as a Chief Officer in one of Chandris tankers, I received a message from the London office to disembark at the next port and to fly to London in order to meet Mr. Chandris for a very important matter,” Mr Soutos recalls.

“Adequate arrangements had been made for us to arrive in London as soon as possible. A meeting was arranged with Mr Chandris during which he confided that he intended to establish a passenger line between Greece and Australia and he purchased the ‘Bloemfontein Castle’ of Castle lines to be renamed ‘Patris.’”

‘Patris, please deliver this message to my love ones’

Nikolaos Soutos found his time on Patris very difficult. Τhe passengers were in a tough position psychologically, because as you can understand, they were going to a country with a different culture that was totally foreign to them.

Many people were uneducated, not knowing anything of the English language and the majority did not have any professional skills.

“Today, Greek people are forced to leave Greece due to the economic crisis - but they are highly educated, they are professionals, they speak foreign languages,” explains Soutos.

“But those people - most of them coming from villages, did not know anything and desperation forced them to leave their families and country.”

“During the trip we did our best in order to distract passengers from their thoughts and problems,” says Soutos. “We organised activities almost every day.”

“We would search among the  passengers to find someone who played the guitar, bouzouki or accordion -  even people who knew jokes were called forth in order to change the negative atmosphere of the passengers.”

He recalls the story of one man touching the boat and telling to it to deliver some messages to the love ones.

“As we were leaving the port of Sydney, during my inspection I saw a serious-looking man from the pier side touching the vessel, crying and saying various names,” says Soutos.

“[He was] hoping that vessel would send his greetings to his beloved persons back to Greece. I went there, touched his hand and I told him ‘my friend be sure Patris will carry and send all your good messages to your people.’”

‘I owe my happiness to you’

Soutos has a similarly compelling story about a young woman that left Greece to meet a man in Melbourne for an arranged marriage.

“One day, as I was in my office, the Chief Steward requested to go to the salon as there was a problem,” he says.

“When I went to the salon, I saw a pretty young girl surrounded by two older women and an aged man.”

“When the girl saw me, she ran towards me and threatened to jump off the ship if she was forced to depart once reaching the destination.”

“I told her not to worry as we intended to take her back to Greece with no cost to her - and in the meantime I was thinking of an alternative solution and I asked her if she had any relatives or friends in Sydney, our next port of call, in order to take her there,” Soutos recalls.

“It was years later and in the meantime I became a ship-owner myself, with various ships going to Australia.”

Then one day, says Soutos, “during a trip with my wife in Sydney, while I walked into the lobby of the hotel we were staying, I heard a voice calling my name.”

“I turned around and I saw this girl with a man and a child. The woman ran towards me and hugged me. The man also approached me and asked if I was the Chief Officer of Patris.”

“When I replied ‘yes’ he asked if he could kiss me in order to express his gratitude for his happy family because he was aware of his wife’s story and how much I helped. This is a story I will never forget,” the vice-captain of Patris, Nikolaos Soutos says.

History of the Ship

The Patris made a total of 91 voyages to Australia between 1959 and 1975, travelling regularly via Egypt’s Suez Canal.

In 1967, when the Suez was closed, she spent five years detouring her way around Africa on her way to Australia.

After Darwin was almost destroyed by Cyclone Tracy on Christmas Day in 1974, the Patris anchored in Darwin Harbour for nine months to provide emergency accommodation for those left homeless.

In November 1975, Patris left Darwin for the last time, never to return to Australia.

Four years later in 1979, she was converted to a car ferry to serve on the seasonal trade between Greece and Italy.

She was then sold to the Karageorgis Line and renamed ‘Mediterranean Star’ under whose flag she continued as a ferry and occasional Mediterranean cruise ship until 1986.

In August 1987, after a long period of idleness, she was towed, under the name of Terra, to Karachi, Pakistan, and into the hands of the ship breakers.

“It’s like I witnessed the funeral of a living person,” says Soutos.

Listen to vice-captain Nikolaus Soutos's full interview (in Greek) with SBS Greek below: 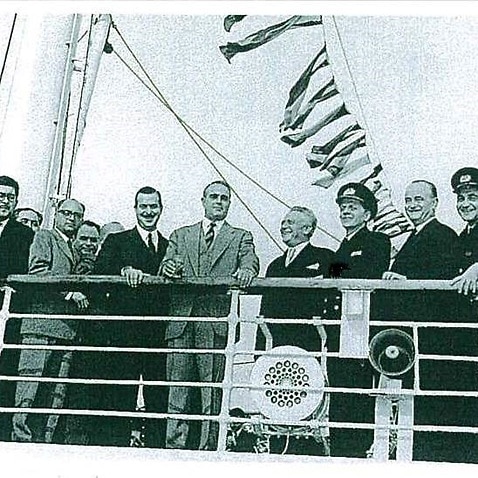 Married in "Patris" boat on the way to Australia