Six decades ago, 'the brides’ plane' brought young, single, Catholic domestic workers under Plan Marta - a migration agreement between the governments of Australia and Spain, bolstered by the Catholic Church. While the young 'Martas' were following their dreams of a better life, what they didn’t know was that they were to be married off to other Spanish migrants who had previously arrived to work in the cane fields.

Feelings of excitement, nerves and softly-spoken prayers added pressure to the cabin air. It was the spring of 1960, when 92 Spanish and Greek women decided to board, for the first time in their lives, a ‘flying machine’.

They were embarking on the adventure that would forever change their lives, heading to a new beginning in Australia, far from the misery of postwar Europe and the grip of fascism that ruled Spain under Franco’s dictatorship.

The passengers were the first ‘Martas’. They were travelling under a migration agreement between the governments of Australia and Spain, supported by the Catholic Church, called ‘Plan Marta’, which began in 1960 and ended in 1963.

The ‘Martas’ came with a two-year contract to work as domestic servants in a country that had been sold to them as ‘wonderful’; a place where they could earn their average monthly salary in a week’s time.

But unbeknownst to them, they were traveling onboard what was dubbed ‘the brides’ plane’. The real intention behind Plan Marta was to marry them off to their migrant compatriots, so that they would have children, stay in the country, and help populate Australia. 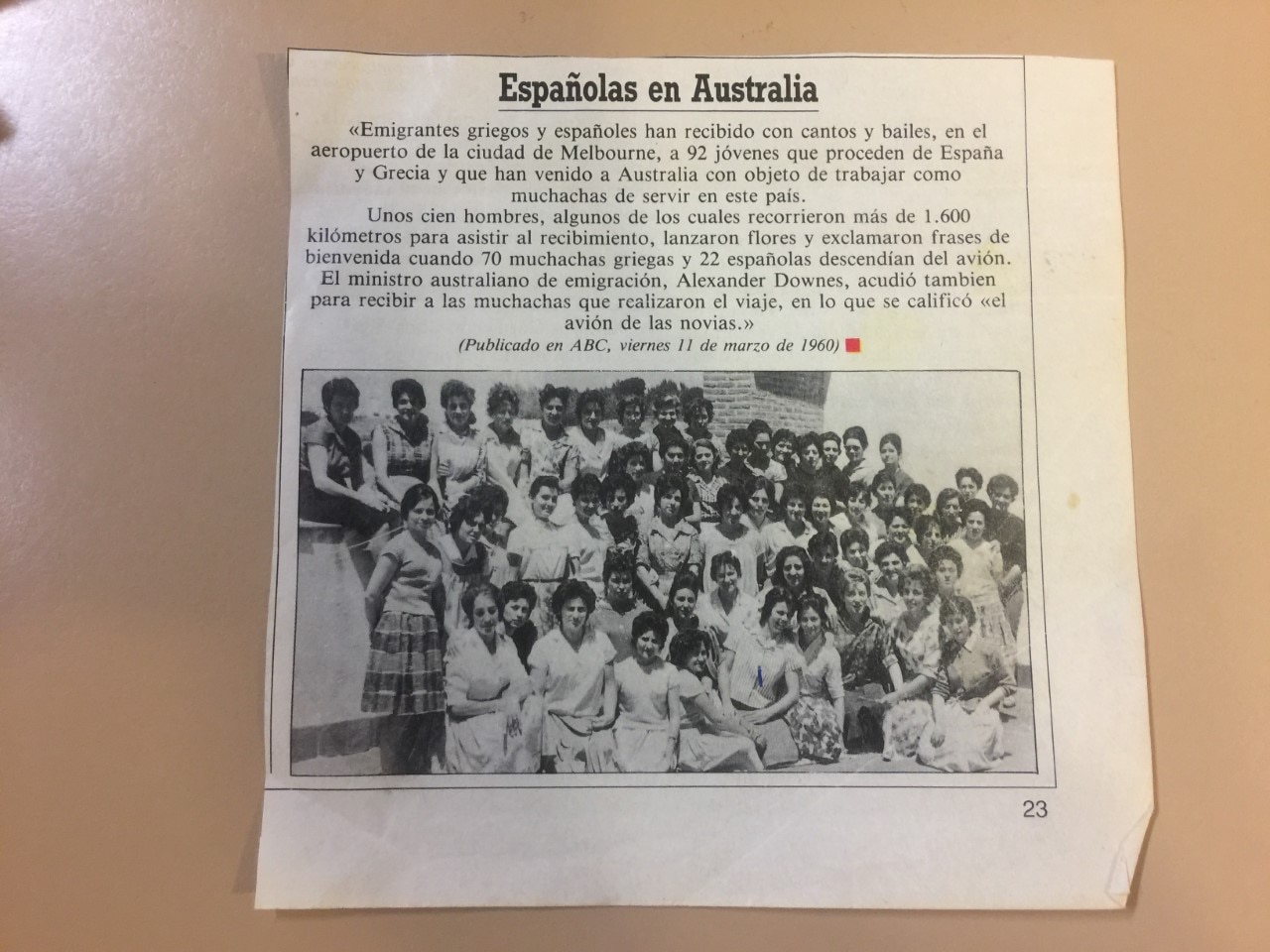 During Liberal Prime Minister, Robert Menzies’ second term, Australia was in the midst of a massive industrial transformation, supported by the hard work of foreign day labourers that arrived under Menzies’ assisted migration programs of the mid twentieth century.

For Australia, migration was a matter of survival; it was “populate or perish”.

Newspapers published at the time that the first ‘Martas’ were welcomed with a brief ceremony attended by then Minister for Immigration, Alexander Downes.  About a hundred Greek and Spanish migrants who had traveled some 1,600 kilometers for the occasion performed “songs and dances” in their honour.

But for Mari Paz Moreno, one of the first ‘Martas’ who was traveling on the ‘brides’ plane’, coming into the country was a brief and impersonal affair. She tells SBS Spanish that she felt they were treated "like sheep".

Upon arrival, the girls were separated and divided between the families and the Catholic missions to which they had been assigned.

“They did not know it was called ‘the brides plane’ (…) and the men had other intentions,” Spanish-Australian researcher and academic, Dr. Natalia Ortiz explains.

At the time, Australia already had a significant number of European migrants from Greece, Spain and Italy, mostly single men, who had arrived with a two-year contract to work under various migration initiatives known as "Kangaroo Operation" (1958), " Eucalyptus” (1959) and “Emu”(1960), among others.

Most of the men lived in camps in remote areas of Queensland. They toiled from dawn to night cutting sugar cane.

The arrival of the ‘Martas’ meant the possibility of meeting women from their own culture, who spoke their language, and fulfilled their dreams of forming a family.

Although the 'Martas' weren't forced into marriage, conditions meant that these women were left with little option. 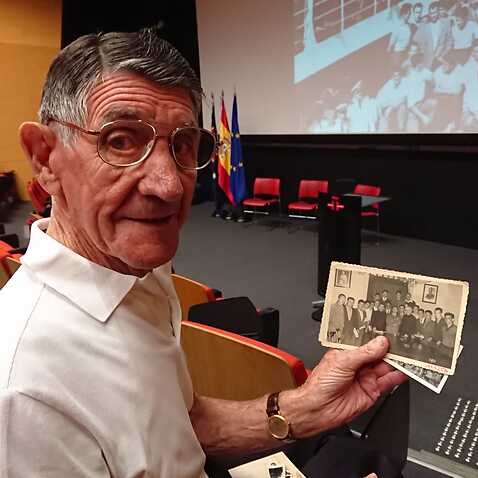 The dream of the ‘Martas’

Most of the approximately 700 women who arrived under Plan Marta in 13 different flights had never left Spain, nor traveled outside their cities or towns. Some knew nothing of the country that would ultimately become their home.

Many were already working as domestic servants in Spain from an early age.

Some of them had to “ask permission from the master of the house to migrate, then they asked the priest and then their fathers,” Dr Ortiz explains.

Under Franco’s regime (1939-75) there was “a rank of male power,” Dr Ortiz adds. In Spain, the ideal was for women to be patriotic, docile and submissive wives, as well as good Christian mothers.

The women who migrated to Australia dreamed of working, becoming independent and perhaps saving up to buy a house back home.

“One took out a week’s earnings in a month,” recalls Mari Paz Moreno, who worked as a Copy Editor at Europa Press in Spain before migrating to Australia. Mari Paz dreamed of traveling to several countries and learning English. Her goals went hand in glove with what Plan Marta was selling candidates — a reality far from the future that surely awaited her in Spain: marriage, children and housework.

"[They promised] over time we could learn English easily and work on jobs suited to our interests and experience," Mari Paz recalls.

However, what they experienced upon arrival was a different story.

"They sold the country to us as ‘wonderful’, and it was in part, but unfortunately we didn't know the reality beforehand, and it was quite the opposite [of wonderful]."

Life in Australia was nothing like she had imagined. Mari Paz says she owed her wanderlust and motivation to migrate on the idea of "nostalgia of the future," a concept coined by Italian writer, Eduardo Sanguinetti.

But Australia seemed ‘backwards’ to her in many ways.

When she arrived, Australia was a place where she couldn’t even go out or socialise.

READ AND LISTEN IN SPANISH: 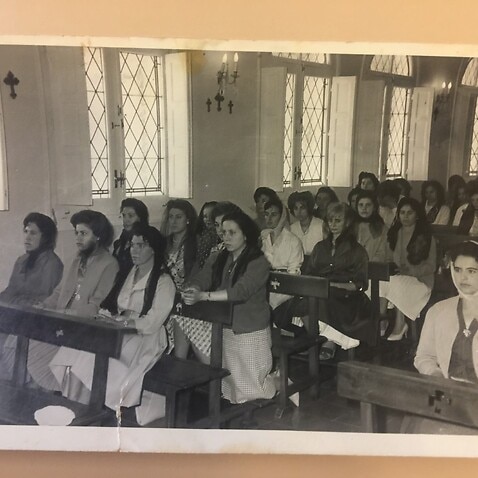 The ‘good maid's guide’: An introduction to Australia for the ‘Martas’


The first ‘Martas’ arrived in Australia with little preparation. The lucky ones got a few introduction sessions in Spain taught by nuns who had never left the country. The girls’ expectations and those of their employers were far from their realities, which became the cause for multiple complaints and dessertions.

Over time, Plan Marta authorities decided to iron out the issues with a handbook called "The Domestic Servant Guide", Dr Ortiz explains.

The text contained information such as what the household hours were like, how to properly address employers, among other details. The guide was updated and modified as time went on, and authorities learned more about the cultural information that was lacking.

"They were learning from their mistakes, from the girls' complaints, and the complaints made by host families who were unhappy because the girls left before the stipulated period," Dr Ortiz explains.

Dr Ortiz adds that men who arrived under Operation Kangaroo and Emu received a completely different handbook to the one given to the women. They received books teaching them how to speak English or ‘Immigrant manuals’, which contained more in-depth information. According to Dr Ortiz and Mari Paz Moreno, many ‘Martas’ lived subjected to their host families, in places where it was dark and deserted at night, with little social activities, unlike Spain.

Uprooted, these women felt the great blow of loneliness and isolation, of being linguistically and culturally different. They were far from their mothers’ or grandmothers’ arms, they missed gossiping with friends, and Sundays with the family. Life came down to hard work in a strange household.

“You totally lost your identity, you were no longer Don Mariano's daughter,” Mari Paz says. She also remembers Australians would stare at her dark hair.

They called you offensive names, like ‘wog’. Xenophobia dripped down the walls.

No affordable telecommunications and no social networks meant loneliness was brutal. Calling home was only possible a few times a year, or in case of extreme emergencies, due to the prohibitive cost of international phone calls. Travelling to Spain once a year was unthinkable.

The pain was such that it was given a name: “it was known as ‘the Australian ailment’,” Dr Ortiz says.

“There was even a woman who was sent back because she couldn't overcome her depression.”

Dr Ortiz, who has interviewed dozens of ‘Martas’ and their relatives in Australia and Spain, explains that many of them suffered a greatly, even from the trip over.

“A ‘Marta’ told me she prayed for the plane to crash from the moment it took off,” Dr Ortiz explains.

"There is a story about another ‘Marta’ who became delirious as she crossed the Equator."

Dr Ortiz believes many ‘Martas’ suffered from feelings of guilt for having left their families behind, so some forced themselves to "block their feelings", especially due to the lack of communication and empathy they found in Australia.

"The Italian community was their salvation, and many, like Mari Paz, married Italian migrants." 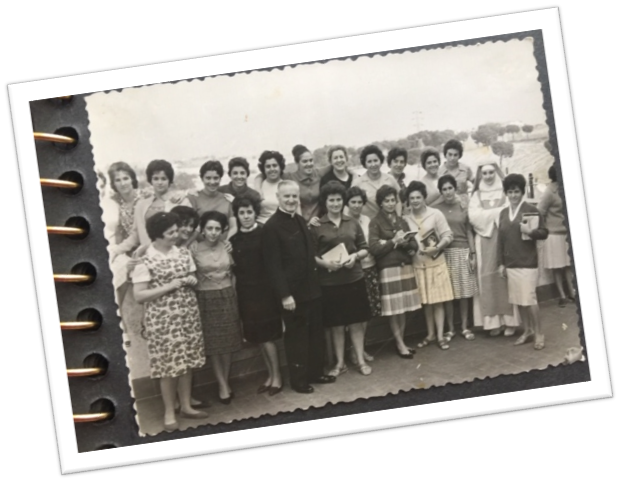 Joyful Sundays of Mass and Tears

In a country where it was a bad look for women to go out alone, the Sunday Mass, rather than an act of faith, became an opportunity to socialise. Some women even went to various mass sessions just to spend more time with their peers.

“We would meet at St Mary’s Cathedral on Sundays and then cry for an hour — it was the best day of our life in Australia!,” Mari Paz recalls.

She also remembers that her local priest had limited Spanish, so he could not offer comfort or solace.

“On Elizabeth Street, the father spoke three words in Spanish. He would tell you: ‘very good, very good, patience, I do understand very well’, and you went home.” 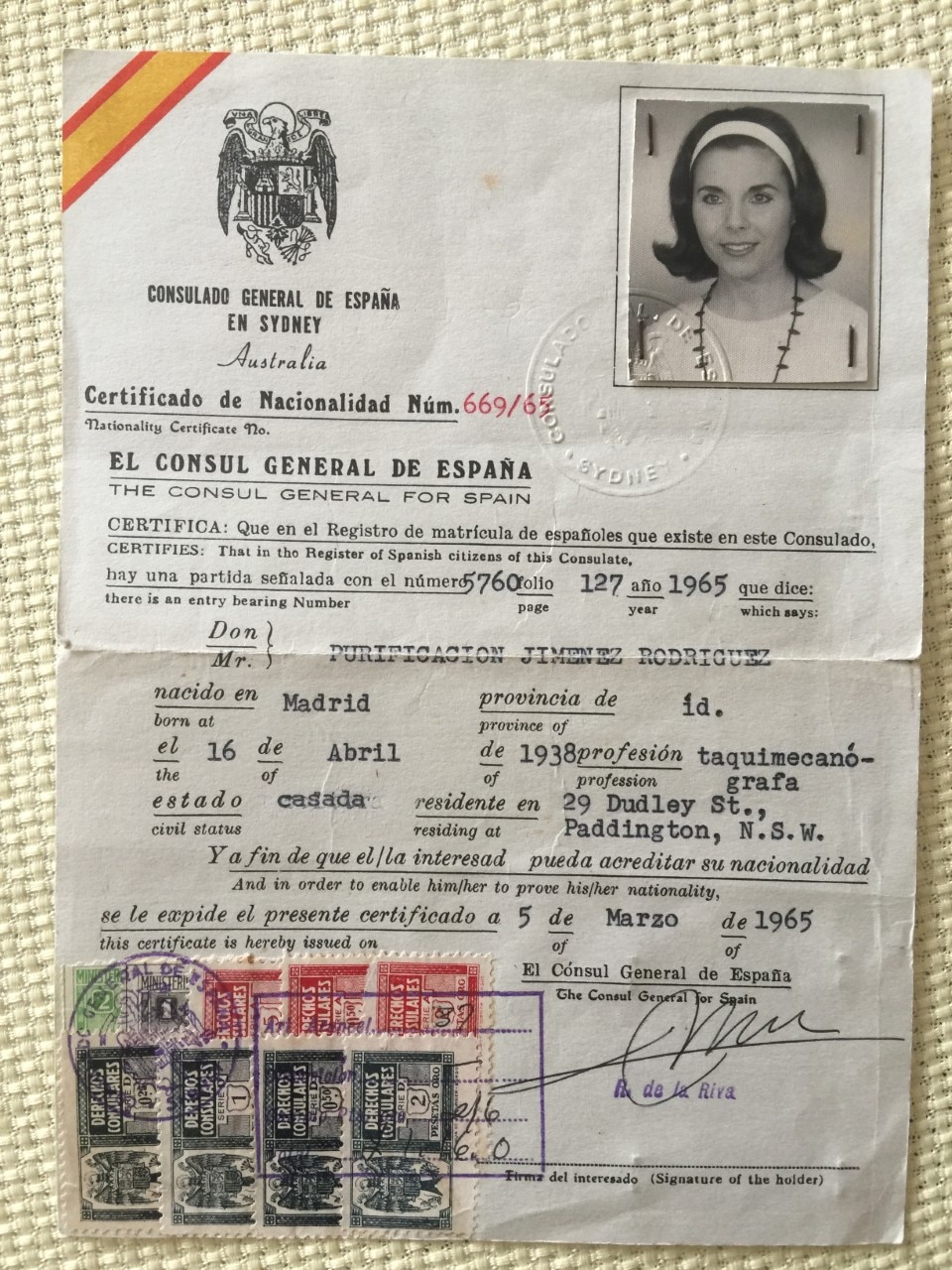 The single mothers who left their children in Spain

The selection criteria for ‘Martas’ traveling to Australia were to be young, attractive and single. However, some ‘Martas’ were single mothers.

It was a status that "under Franco was unthinkable," Dr Ortiz tells SBS Spanish, who learned about two cases of women who left their children in orphanages in Spain.

Dr Ortiz heard the story of one single mother, already deceased, from the woman’s son, who lived in an orphanage until he was three years old. His mother migrated as a ‘Marta’ and asked for him to be flown over after she settled in Australia. The boy traveled to Australia alone as a toddler, under supervision of the flight attendants.

When this boy, already ten years old, and his mother, returned to Spain on a family trip, the woman did not want to return to Australia.

"The family told her: ‘you have to go back, you have a husband, a daughter who was born there,' and the mother suffered a horrific depression," Dr Ortiz says.

When the boy grew up, he decided to become a Qantas flight attendant so he could take his mother to Spain every year.

“Another woman I interviewed in Melbourne left her daughter [back in Spain]. She didn't claim her until she was ten years old, and [the mother] was already married and had another daughter,” Dr Ortiz says.

Despite the "beauty" of the stories of these families reuniting in Australia, Dr Ortiz believes that the process they went through was “very tough”.

Sixty years on from this chapter of Spanish migration to Australia, Dr Ortiz tries to document and preserve what little remains of the journeys made by these women, with the aim of publishing a book.

Among the many ‘Martas’ and relatives that Dr Ortiz has interviewed in Sydney, Melbourne and Spain, there are cases of struggle, resilience and success.

Dr Ortiz says documenting the ‘Marta’s’ journeys has been arduous work, as official records on Plan Marta are not as thorough when compared to those regarding the men's migration operations.

An event titled "Labor of Love: Intimate Histories of Post-War Australia" will mark the 60th anniversary of the arrival of the ‘brides’ plane’ on February 14th in Sydney.

The symposium will be attended by several ‘Martas’, who will share their personal stories experiences with the general public.