Members of Australia's Maronite Christian community are struggling to come to terms with the loss of four young members of their congregation, who died in an alleged drunk-driving incident on Saturday.

The head of the Christian Maronite Church in Australia Bishop Antoine-Charbel Tarabay told SBS Arabic24 that he has “no words” to describe the devastation felt within his congregation over the deaths of four young members in an incident on Saturday.

Abdallah siblings Anthony, 13, Angelina, 12, and Sienna, 8, along with their cousin Veronique Sakr, 11, were struck by a car as they walked towards an ice-cream shop in the Sydney suburb of Oatlands.

One other child of the Abdallah family and two from another family, who are related, were injured in the incident and remain in hospital.

Parishioners at the Our Lady of Lebanon Church in the Sydney suburb of Harris Park, the children were actively involved in charity and community events. The victims' mother Leila Geagea (right) pauses near flowers placed at the scene where seven children were hit on a footpath by a four-wheel drive in the Sydney.
AAP

The Abdallah siblings were also members of Team Jesus, a foundation made up of volunteers who provide food and clothes to Sydney’s homeless.

Bishop Tarabay said there was a “huge pain” felt not only by the family and friends, but also the entire Lebanese-Australian community.

“The tears haven't stopped since the accident, and God knows for how long [they will last], it came out of many people’s eyes and most importantly from the parents of the victims,” he said.

“I have met the two families, the Abdallah family and Sakr family who also live with the same faith, the mother and the family have faith that their daughter is an angel in the sky along with the three other kids.”

Bishop Tarabay said it remained vital for members of his congregation to stand with the victims’ parents.

“I first met their father Daniel Abdallah two years ago, he was building a ramp for the disabled in the church, and he had such presence and radiance,” he said.

“This family used to wake up every morning and check on their kids, they opened the room, and now the rooms are empty, no one is there and that is a lot of pain.”

Isabella Geagea, a tutor of the Abdallah children, and the god sister of Veronique Sakr told SBS Arabic24 that each child had the world at their feet.

“Veronique was an angel on earth, no one has the personality of Veronique, she was her own person, with a smile always on her face, she loved everyone, and she wanted to learn. She was wise beyond her years. “Anthony was the man of the house, He wanted to be like his father, follow in his footsteps in the hard work and good deeds. He loved the family so much, and he would look after his siblings.

“Angelina had a presence in the house. She would be standing next to her mum and if Leila was doing the dishes then Angelina was standing right beside her drying and packing them away."

“She looked after her sibling, there were six kids in the house, and she would help her mother in everything.

“She would be next to her father if he needed her, he could rely on her, they wouldn't call her Angelina, they called her MLH or my little helper. SISI [Sienna] wanted to act, she wanted to be on TV, any room she walked into, she lit up, she would make everyone laugh.”

The tragedy has deeply impacted not only Australia’s Maronite community, but also the wider Arabic community.

SBS Arabic24 has received an outpouring of emotion from callers who expressed their devastation, as well as calls for stricter laws regarding alcohol consumption. 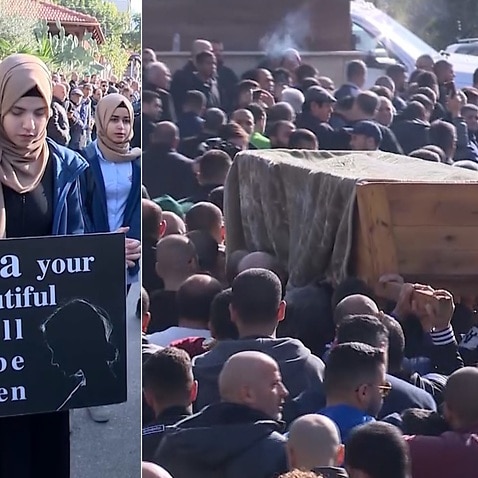 Caller Adan Younis said that he will stop consuming alcohol all together after receiving the news.

“My first reaction to this incident is that I have decided to stop drinking. I express my solidarity and sorrow for the children who passed away. May they rest in peace.”

A vigil was held at the Oatlands crash site in Sydney on Monday night.