"It is not uncommon for Venezuelans to overstay or apply for protection," is a response from the Immigration Department that has generated confusion and disappointment among Venezuelans, some of whom are now Australian citizens.

Juan Pablo Alvarez and his family - who are Australian citizens of Venezuelan origin, were hoping to welcome his wife's family for a Christmas visit downunder from Venezuela, in December 2016.

Alvarez 's parents had only recently returned back to Venezuela after spending three months with them had come to Australia to meet little Sofia.

Christmas would have been the best opportunity for the other set of grandparents, but the answer received from the Department of Border Force and Immigration to their tourist visa applications left them speechless.

Alvarez tells SBS Spanish that the response received by Mr Heber Garbi from the Australian embassy in Chile explained that his visa was denied even though the decision was not "a reflection of your financial capacity or professional and personal profile," but was due to the current situation in Venezuela."

"I cannot be satisfied that you genuinely intend a temporary stay in Australia."

Ongoing political and economic unrest in Venezuela, involving months of violent protests against President Nicolas Maduro, resulting in many deaths, appears to have far-reaching consequences for its people.

For Alvarez meanwhile, to his surprise, the Immigration official in Chile said, "I cannot be satisfied that you genuinely intend a temporary stay in Australia."

His parents-in-law have already visited Australia on several occasions and have never overstayed their visas -  nor did they intend to do it this time.

"My father-in-law [aged 71] has a farm in Venezuela where he produces agricultural products," says Alvarez. "He has plenty of reasons to go back to Venezuela and my mother in law has all her family there."

He adds that they have no motives or intentions to even ask Australia for protection. "The only intention they have is to meet his one-year-old daughter." Opposition block streets during a demonstration in Caracas, Venezuela, on 08 August 2017.
AAP

For this young family with another five-year-old boy, the visit would have brought Alvarez's family some relief from the growing childcare fees they have to face, as well because the couple both work full-time.

"Parents living here without relatives around understand how difficult and expensive it is," says Alvarez. "Besides, sharing time at Christmas with them would have been very special."

"It is well documented that Venezuela has suffered political and civil unrest over many years, and that the situation remains unpredictable."

The letter from the embassy says, "it is well documented that Venezuela has suffered political and civil unrest over many years, and that the situation remains unpredictable." 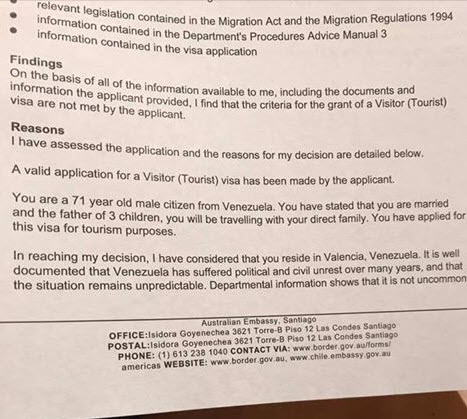 The message has been the same for several other Venezuelans during the past month.

Yessica Ramones, also an Australian citizen, invited her mother to visit Australia in June, but two weeks ago, her visitor visa application was also rejected even though she has travelled to Australia before without overstaying her visa period.

“My mum came with my mother-in-law two years ago to celebrate my husband’s graduation as a master in Civil Engineering and left Australia after few weeks,” says Ramones.

On this occasion, the letter from the Immigration Department also pointed to the political situation in Venezuela as the reason.

The assessment states that Ramones’ mother hasn’t got strong links with Australia because she is divorced and both of her kids are in Australia. The same situation as two years ago when she was granted the visa.

"My mum is a doctor," says Ramones. "She works for the health public system, run by the government, and was making a pause from her job to come to visit us and then return back to Venezuela because she has responsibilities there.”

The Immigration Department refers to Ramones, who would be supporting her mother during the trip, as a third party.

"They are not considering that I am her daughter. They speak of me as a third person, a friend or someone not directly related to her," says Ramones.

Visas revoked after being approved

Other Venezuelans, such as Susana Ayala, who were expecting to come to Australia to participate in the Best Doctors’ convention, which will be held in Sydney in September, had their tourism visas revoked few days after they were granted.

The reason given was the same again: the "volatile situation" in Venezuela.

“I applied and had the confirmation that my visa was approved for two years and could stay for three months in the country," Ayala tells SBS Spanish.

"15 days after, when I already had my air tickets bought, I received a letter saying that my visa was revoked – not because I did not have the money to support myself but because I am Venezuelan and I could decide to stay in Australia." 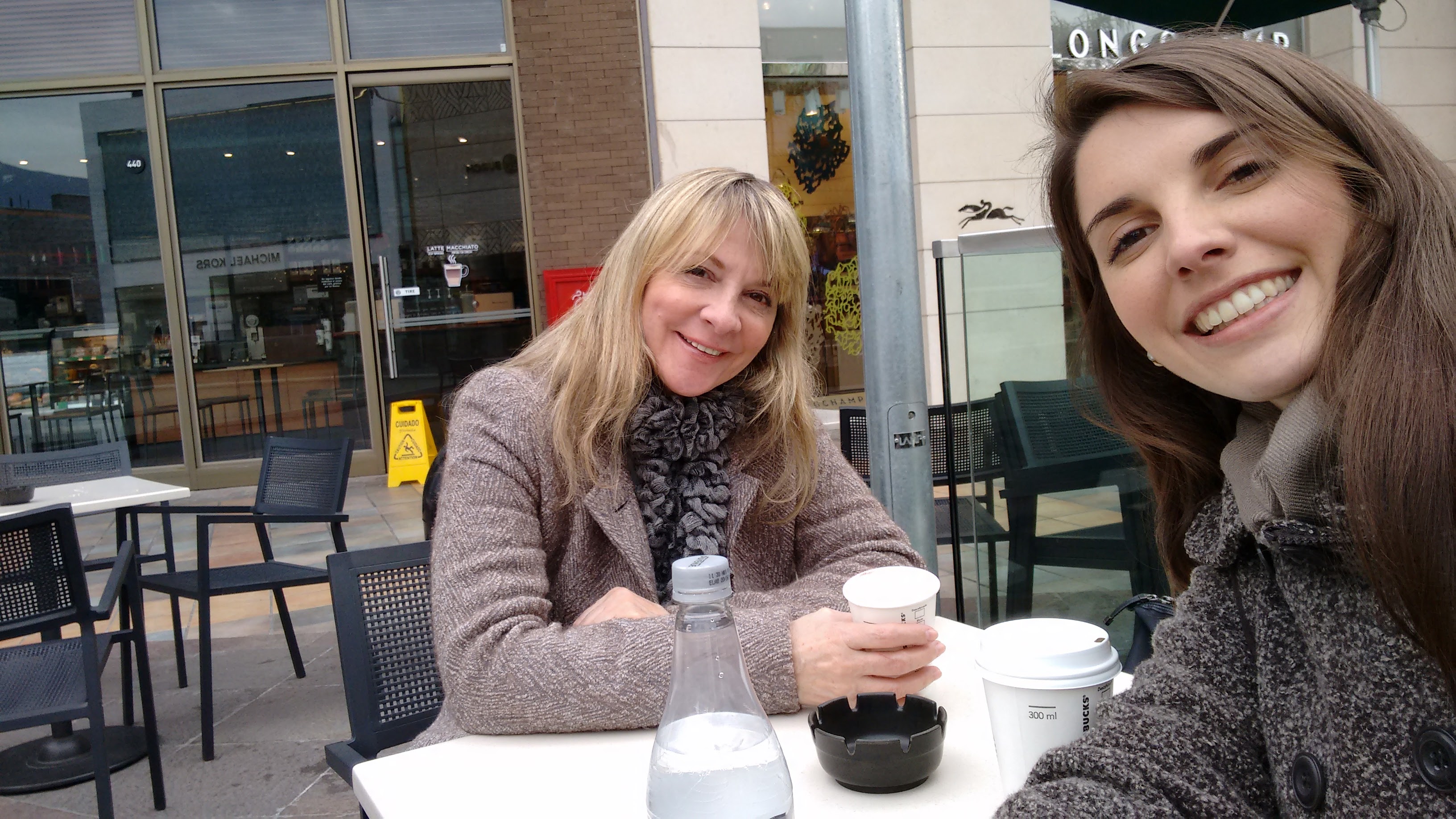 Ayala had won a dream trip to travel to Australia for being a successful health insurance agent, and still hopes her second application through the Australian Embassy in Chile has better luck this time.

The visa revoke "shocked me a lot" says Ayala.

"They are taking from me the opportunity of enjoying a prize that is very difficult to get, because you have to reach a very high selling levels. And I got it."

"It is travel to the Best Doctors’s convention, with everything paid, a wonderful hotel, helicopter tours, the best Sydney restaurants, and one day training with the organization."

As a successful salesperson in her country, Ayala says she has no intention of leaving Venezuela or overstaying her visa in Australia.

Some fear this is a blanket policy, so are organising through social networks to know how many people are being impacted by the decision

Frank Pineda, a Venezuelan from Perth, has designed a special online form to collect the data, so those affected can fill out their details.

“Denying Tourist Visas [by] arguing a political unrest is like a punishment”, says Pineda. “We want to ask the Immigration Department why the visas have been denied without giving people the opportunity to support their applications better."

He says the situation in Venezuela is difficult, but would like to think that the denial is due to a mistake or misinformation inside the Department because the people affected in the cases he knows “are genuine tourists."

"This is affecting Australian citizens who have been living in Australia for more than ten years and whose parents and relatives have come to visit for three or four occasions, this is why it does not make sense." 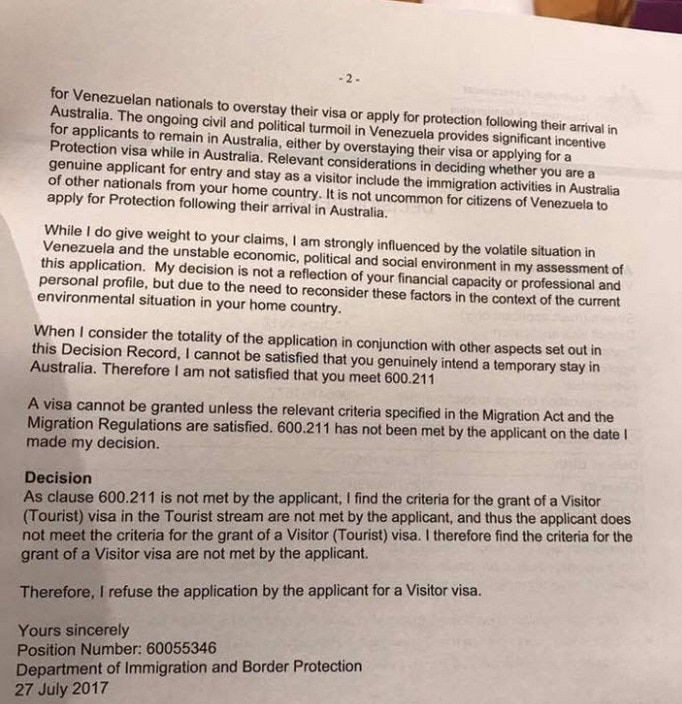 A spokesperson from the Department of Immigration and Border Protection (DIBP) said in a statement to SBS:

The Department did not respond to advise how many Venezuelans have overstayed their visas nor did inform if this is a general policy for people from the troubled South American country.

It did not say if the decision is also affecting people who are applying for other kind of visas.

What about potential applicants to protection visas?

The fact that the DIBP is preventing people from potentially asking for protection in Australia once they arrive to the country, as stated on the visas rejection letter, is something that Australia has been doing to people from Iraq and Afghanistan, said Carolina Gottardo, Director of the Jesuit Refugee Service-Australia.

“The aim of the 1951 Refugee Convention is to allow people under risk of persecution to seek sanctuary in other countries," says Ms Gottardo. “Australia is affecting the Convention principles by decisions like this."

“It has tried to prevent people from asking for protection if they come by boat, but now it could be argued that it is doing it with people who would intent to come by plane, as well," says Ms Gottardo.

“The aim of the 1951 Refugee Convention is to allow people under risk of persecution to seek sanctuary in other countries. Australia is affecting the Convention principles by decisions like this."

“In reality, and no matter what way people use to come, by boat or by plane, what the government is doing is ignoring its international obligations and applying an extremely punitive legislation and a system of border protection which do not allow many people to seek asylum," she added.

Although the Venezuelan community has one of the highest levels of growth in Australia among Spanish speakers in recent years, its number is still small, compared to the number of Venezuelans who have left the country – more that 2.5 million, according to the International Migration Laboratory. This represents 8.3 per cent of the total population.

In the last Census, the Venezuelan community registered an increase of 71.6 per cent from 2011, reaching a population of more than 4,500 people in Australia. This growth is similar only to the Colombian community which increased by 72.3 per cent in the same period.

Venezuelan Australians who are posting their frustrations to social media say that all they really want is some clarity from the Australian government so that they do not have to expend effort and money in visa applications that will be rejected without further considerations.

Listen to the full podcast (in Spanish) by SBS Spanish in the audio player above.