Australian permanent resident Sayed Dilagha Hashimi says he's lucky to be alive after surviving a gunshot wound to the head days before being evacuated from Kabul. 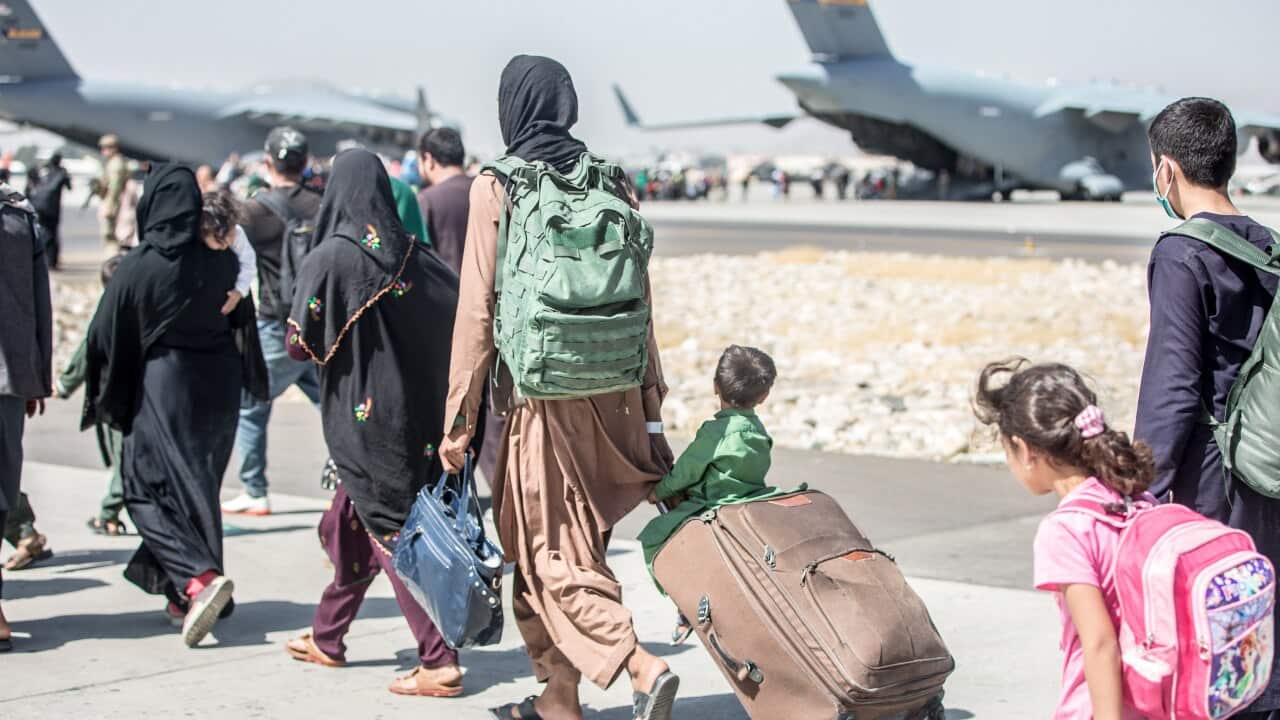 Mr Hashimi departed the country on one of the last Australian evacuation flights on Tuesday.

The Melbourne construction worker, who was in Afghanistan tending to a family matter, tells SBS Pashto had he not already fled the country, he would have been in the exact spot targeted in a horrific twin suicide bomb attack on Thursday.

The blasts outside the airport, claimed by Islamic State Khorasan (ISIS-K),
killed more than 70 people, including 12 US troops.

Foreign Minister Marise Payne on Friday said
it wasn't yet clear whether any Australians had been caught up in the attack.

She confirmed that all Australian troops had been withdrawn from Afghanistan one day earlier and evacuation flights had been terminated before the blasts.

SBS News:
As the situation deteriorates in Afghanistan, here's what you can do to help

After being notified by the Australian government to attend the airport for evacuation on August 19, Mr Hashimi says he was unable to position himself close enough to get inside the gates.

“I saw Australians and other military personnel from a distance, but I was far from them, standing where the Taliban were positioned.

I tried many times to get closer, but the US forces [began] using tear gas, and I escaped the area.

He found refuge away from the airport entrance, but moments later, he was hit in the head by a bullet he believes came from Taliban fighters who began shooting into the crowd.

“I didn’t know how the situation evolved and what happened to me. I then stood up and saw blood on the road and my face. My face was covered with blood.

“When I was hit in my head and bleeding, I thought I would die. When I went to the hospital in a taxi, the doctor told me that, thankfully, the bullet didn’t go deeper.

A blurred image of Mr Hashimi receiving medical attention after being shot. Source: Supplied by source.

“I believe the Taliban hit me because their weapons were pointing down [towards people]. I saw others were injured or killed too.”

The gruesome injury forced him to rest up for a day as he developed a fever.

He informed the federal government of his condition and shared a photo of his injury with a friend in Australia.

“Australian immigration emailed me back and called to say they cannot do anything outside the airport. They told me 'you have to come to the airport'.”

He was then notified to attend the airport’s AB gate for evacuation.

“There was sewage water close to the gate, and we were in that water early in the morning. We then showed our passports and US troops pulled us up from the water and took us to the Australian forces.”

With this stroke of luck, the pair managed to reach Australian forces and the pair boarded an evacuation flight at 11pm that night.

A watery ditch by the airport fence where the pair had entered from was filled with blood-soaked corpses following Thursday's attack, some being fished out and laid in heaps on the canal side.

The pair landed in Dubai soon after and are awaiting a flight back to Australia.

He says he saw “many dead bodies” during the ordeal and adds that “many people with and without passports were trying to get out of Afghanistan”.

He says he's "very happy" to have made it out alive.

His escape came before Australia issued updated travel advice for Afghanistan on Friday, to stay away from Kabul airport.

“Do not travel to the airport,” Senator Payne said.

“If you are in the vicinity, move to a safe location and provide contact details for consular support as well. I cannot encourage strongly enough the following of that travel advice. I encourage those who are in Kabul, who have not registered with the Department of Foreign Affairs and Trade, to register.”