A group of Afghan war veterans, who claimed asylum in Australia after the 2018 Invictus Games, are pleading with the federal government to bring their families here safely. 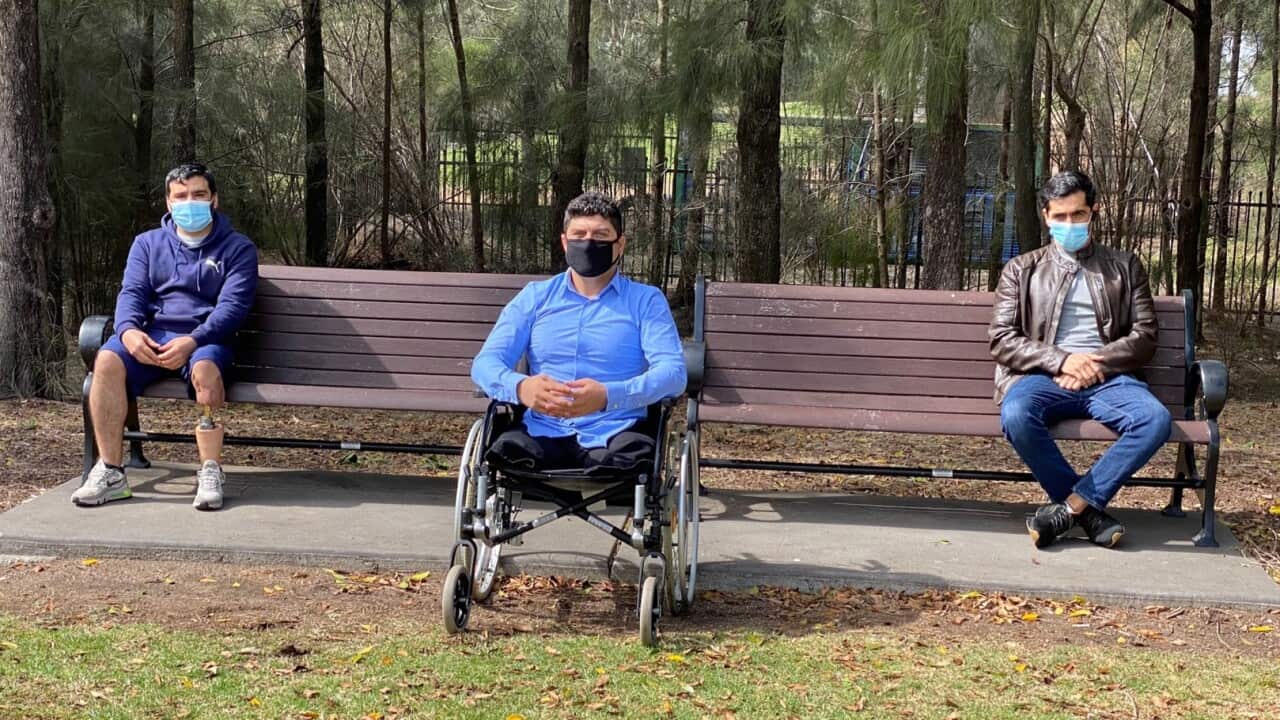 Former soldiers Aminullah Arsalan, Sohail Naseri and Mohammad Salem are calling for their families to be evacuated from Afghanistan. Source: SBS

The war in Afghanistan has condemned former soldiers Aminullah Arsalan, Sohail Naseri and Mohammad Salem to an endless cycle of suffering.

They've lost limbs and their country, and now they fear they will never be reunited with their family members still in Afghanistan.

For two years, they've been campaigning for their wives and children to be granted asylum in Australia, saying they are at risk of the Taliban.

Advertisement
And while the Australian government had tried to get them on an evacuation flight from Kabul airport, their efforts have so far been unsuccessful.

Now it's feared they will be among those left behind.

“The way it's ended is extremely traumatic. We have lost a lot of people in the war, and also many have been injured,” Arsalan says.

“I fought and have also lost my leg for that government.”

Aminullah Arsalan lost his left leg in a Taliban ambush before the age of 20. Source: SBS

The men were among a group of former Afghan soldiers who came to Australia in 2018 to compete in the Invictus Games.

As targets of the Taliban, six of them chose to apply for asylum following the Games and were granted permanent residency in 2019.

They’ve been in Australia ever since but have continued the fight to bring their family members over.

Naseri was severely wounded when he was hit by a landmine while patrolling with the British Army in Helmand province, south of Afghanistan, in 2009.

Sohail Naseri lost both his legs while fighting with the Afghan National Army in 2009. Source: SBS

He survived but lost both of his legs. In Australia, the three men have been fitted with prosthetics to help them walk again.

“With my disability, it has been extremely challenging for me here and my family back in Afghanistan,” Naseri says.

“I am concerned about my family's safety.

The federal government has been processing the asylum applications of their family members for the past two years.

Despite warnings of Afghanistan's rapid unravelling, their visas were never formally approved.

Alison Battisson, the immigration lawyer representing the families, says the federal government has "moved mountains" over the past two weeks to try and evacuate the group.

But in the end, she says, it was an "impossible task".

“I am very critical of the Australian government. It was very clear that even if they couldn't foresee the speed of the fall of Kabul, they could see Afghanistan was deteriorating back into a state that would eventually be controlled by the Taliban," she says.

“We were told that people with valid visa applications, which the Invictus Games families had, could go to the airport and they would be processed inside the airport.... but you were telling mothers with young babies, not even toddlers - babies - to run the gauntlet of Taliban cattle prodding, whipping [and] suicide bombings.

"If you were by yourself with children, you had no chance."

Mohammad Salem says his wife and four children had been at the airport for days trying to get onto an evacuation flight and his daughter was injured during the chaos.

“At the airport gates, there were thousands of people waiting.

“My family has been there morning until evening, and nothing happened.”

On Thursday, amid warnings of an attack at the airport, he told them to leave the complex, and they did so.

An hour later, twin suicide bombs ripped through one of the airport’s main entrances, killing at least 170 people.

Mohammad Salem as a soldier for the Afghan army. Source: Supplied by source

The men are now pleading with the federal government to find another way to get their loved ones evacuated.

“If anything happens to them, if they get killed, I have no life, life is meaningless for me sitting here,” Salem says.

When asked about the details on the future evacuation plans, a Department of Home Affairs spokesperson referred SBS Pashto to a
transcript
of an interview by Home Affairs Minister Karen Andrews on August 28, where she said: "We’re looking at a range of options, we will continue to work with our international partners – the United States we’re already working with and the United Kingdom; we’re already working with the UNHCR and the IOM – so there is a presence from some of those organisations still on the ground in Afghanistan."

A Home Affairs spokesperson added, "the evacuation of persons with unfinalised Family visa applications was supported through alternative means".

"All visa applicants, including Family stream visa applicants, must meet the requirements in the migration legislation, such as family relationship, health, character and identity before a visa can be granted. Some Family visa categories are subject to capping and queuing arrangements.

"Assessments of a permanent visa often cannot be completed quickly, due to the need to consider the visa application against a range of criteria in migration legislation."

The spokesperson says the time taken to process Family stream visa applications "can vary according to the individual circumstances of each case".

"Processing times are impacted by the quality and completeness of applications, the complexity often involved in assessing ‘genuine relationship’, character, health and security criteria, and the order for considering and disposing Family visa applications set out in Ministerial Direction 80."