SHINee vow to continue on as a 4-member group

Following news of Jonghyun's death back in December, this gave rise to the question of whether SHINee will disband or continue on as a 4-member group.

In some news that will undoubtedly bring joy to fans, Onew, Key, Minho, and Taemin have all vowed to continue on as SHINee.

The four members of SHINee have each shared handwritten letters detailing their decision to soldier on for the group's 10th anniversary, the current state of their emotions over the past month, as well as their continued love for Jonghyun even though the singer is no longer with the group.

Here are the handwritten letters from each SHINee member, as well as the translations of each letter.

"Hello this is SHINee's Onew.

I'm not sure what to say first.

I'm thankful that you have been able to protect and care for our members, and I love you so much, I apologize about worrying about you.

I'm sorry to have troubled fans.

I never thought this this would occur, that we would be able to perform again.

However, Jonghyun's mom told us to keep going, and I think the best way to help someone who was longing in pain would be for us to provide comfort to them. I will work much harder even though I come short [in many ways].

Even though I do lack, I want to do my very best for SHINee.

Even if the path is difficult, I will work my hardest.

Jonghyun will be a SHINee member for eternity, in our hearts.

In the hearts of our fans.

I will continue to work as SHINee. 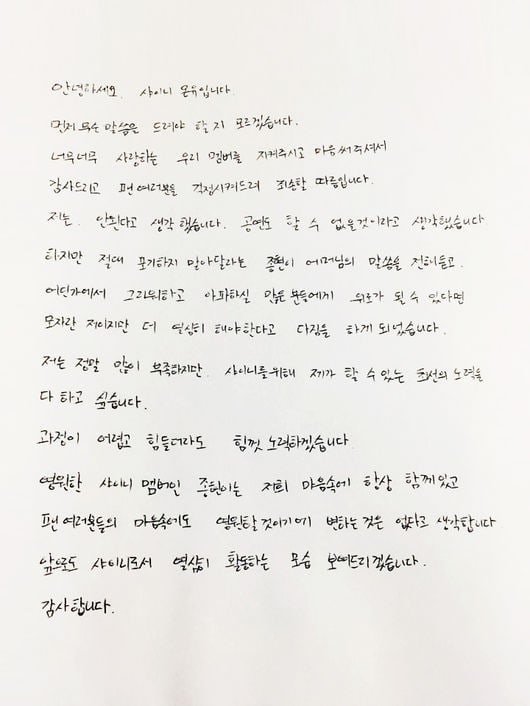 "Hello this is SHINee's Key.

There have been many people worried about me. I am still trying to gather my mind and return to an everyday life.

When I see items that Jonghyun hyung had left behind, my heart sinks and I start tearing up due to the memories. My head always hurts at the thought of it. I am trying to work hard to overcome my mind by instead believing I am spending time with [Jonghyun] hyung.

There have been many people who will continue to support SHINee with our future promotions, and I have also thought about it as well. I however, did not want to give up as [SHINee] for a restful mind.

There have also been many people worried about us [SHINee], and we have decided to continue the Japan concert as planned.

Jonghyun would want us to do something like this, and I believe that it is of SHINee['s character] to continue and keep our promise to fans to showcase a good stage.

This is SHINee's 10th anniversary.

Thank you always so much for supporting and taking care of us. We will return [the favour] by showing a SHINee-stage.

I love you, and thank you." 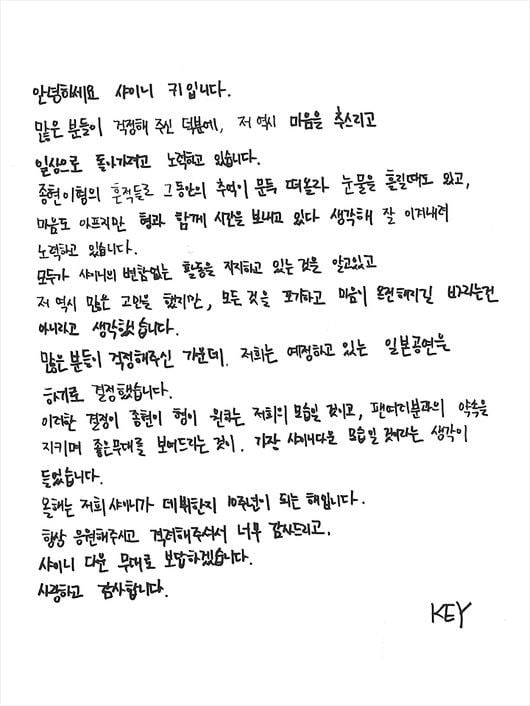 "Hello this is SHINee's Minho.

In regards to the status of SHINee's Japan concert, I wanted to share news in a calmer state, after long considerations and discussions with each other.

While I'm writing this, I'm having many feelings and thoughts and wishes but I hope that my message is able to be conveyed [through this letter].

There are many people who are open to the idea of us returning, and others against the idea, but we actually don't know what is the correct way to handle things in this moment. However, we think that this is our best decision to continue our promise to [Jonghyun].

The memories we have been able to share between our members, staff and fans have been so precious and they are some of the happiest moments that I don't think can be replaced.

Jonghyun's space is also something that can't be replaced, there are many worries regarding whether we will be able to stand on stage as a group again, but I will prepare the fullest so my heart is shown in the near future.

Jonghyun hyung and the rest of us promised, when we were tired and wanted to quit, and when we wanted to run away since we were too weak, we will remember that [the fans] were our biggest strength, and because of this, we will continue to keep singing. Let us all overcome this battle together.

During our time together this cold winter, please continue to share your warm supports with SHINee and Jonghyun hyung." 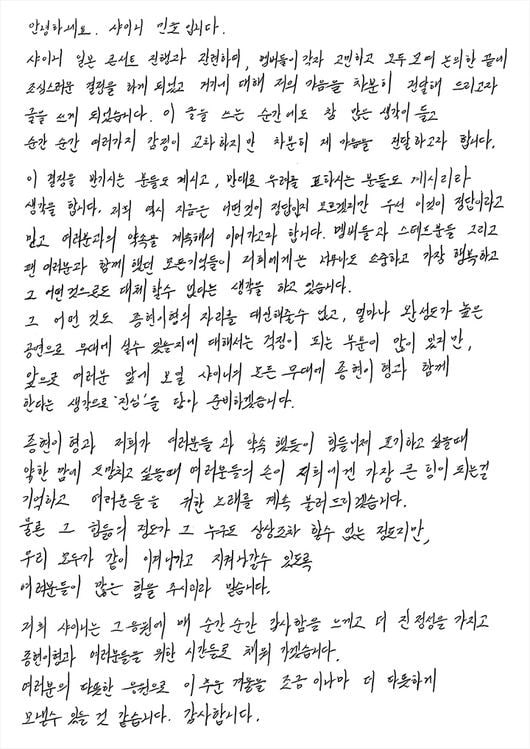 "Hello this is SHINee's Taemin.

To be truthful, I do not have much confidence to continue performing at first, but I want to keep my promise and in the future I don't want to say goodbye to the members.

Looking back, I was the happiest when I felt secure and these moments were when I was fond with both my members and my fans. I don't want to give up these memories.

The future will never be easy, and I'm aware of this. I will continue to try my best so that SHINee will never lose its light and will never be forgotten. The members and the fans are what have created these memories that are so beautiful. I will forever be grateful in regards to those memories in the long run. I want to keep being loved as SHINee, and I want to stand strong on the stage as SHINee for our member who will be watching us from the sky.

I'm sorry to the fans who have been worrying, please keep watching over us.

It is cold so please take care of yourselves and I wish you a happy new year." 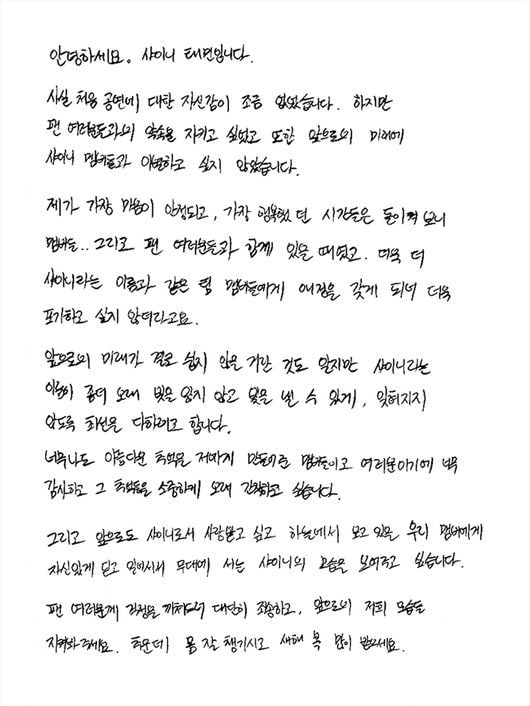