EXO's Chen has confirmed that he is planning to get married.

Chen, real name Kim Jongdae, posted a handwritten letter to EXO's fancafe, in which he shared the news with fans. In it he wrote that he has "a girlfriend who I want to be with for the rest of my life". He mentioned his worry in wanting to share the news with fans without surprising them too much, and that he had spoken with SM Entertainment and his fellow EXO members before choosing to share the news publicly.

He also thanked the EXO members for their love, as well as the fans for their long-standing love and support. 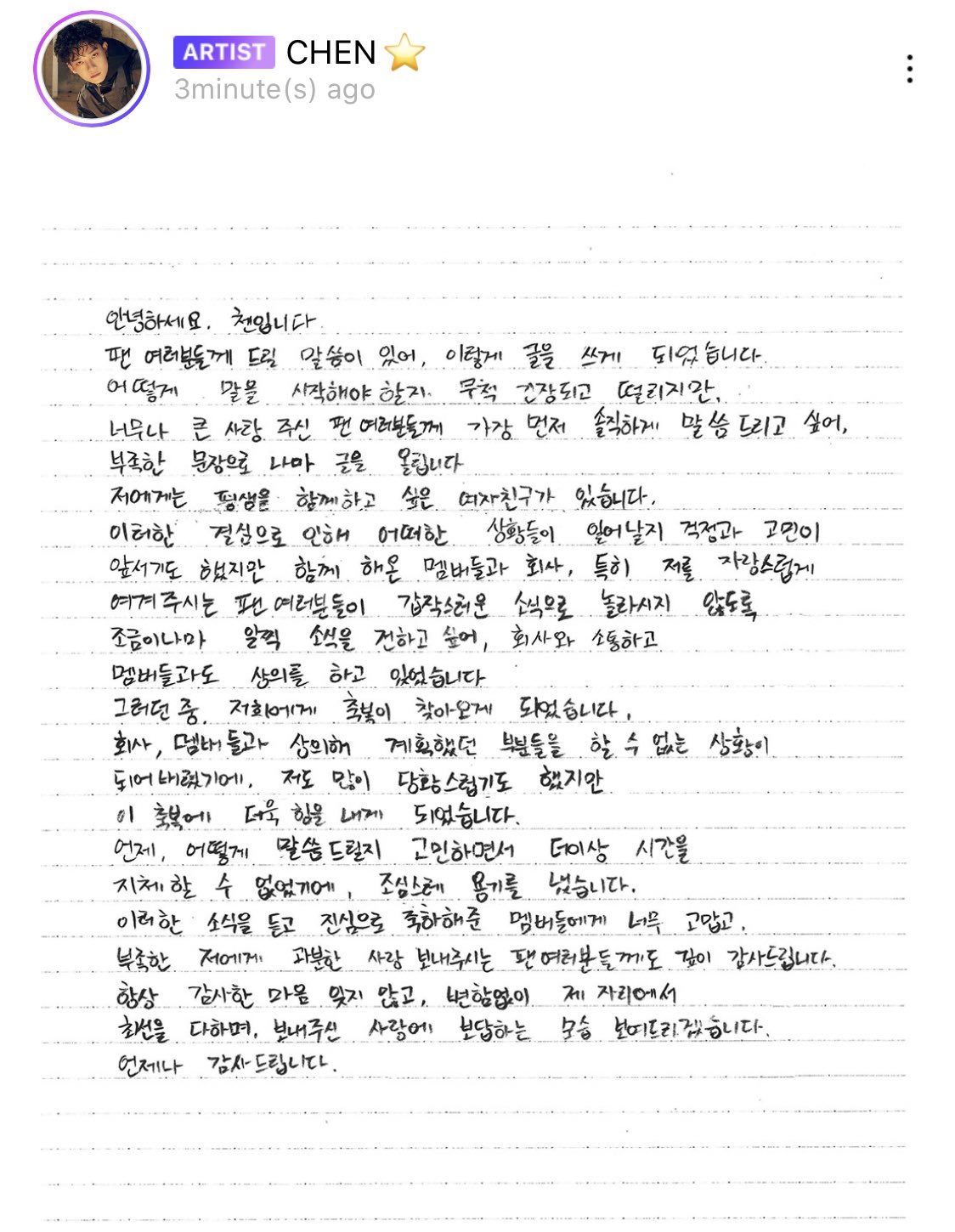 Hello, this is Chen.

I have something to say to my fans, so I wrote this letter. I don’t know how to start, so I am very nervous. I wanted to be the first one to tell my fans who I love so much, so I am leaving this post even with my lacking sentences.

I have a girlfriend who I want to be with for the rest of my life.

I was worried and concerned with what would happen with my decision, but I wanted to let everyone know early so my members, the company and especially my fans who are proud of me wouldn’t be surprised by the sudden news, so I talked it out with my agency and the members.

During that time a blessing came to me. I was shocked because I wasn’t able to take part in the plans that I had made with the members and the company. But, this blessing gave me strength and courage. I thought about how and when I should reveal the news but I didn’t want to wait any longer so I am carefully revealing it to you all now.

I am grateful to my members for genuinely supporting and congratulating me and to our fans for always giving us so much love. I will always be grateful for all of you and will continue to do my best in the position I am in.

Congratulations to the couple!

FOR MORE
iKON teases comeback with behind-the-scenes pics
Looks like the K-pop boy group is in preparations for a comeback!
WATCH: EXO's Chanyeol & Sehun share message on Australian bushfire effort
The pair have posted the video to their socials
MONSTA X's Jooheon to take break due to mental health
The idol has recently been missing from MONSTA X's public schedules
Asian idols donate & bring attention to Australian bushfires
Asian pop stars are using their platforms to draw attention to the current crisis
Play