The expanded competition at UEFA EURO 2016 means fans won’t be denied the pleasure of watching stars like Zlatan Ibrahimovic and Arda Turan at a major event. For some it will be the first chance to showcase themselves at Europe’s premier event, so here’s 10 tournament debutants to keep an eye out for. 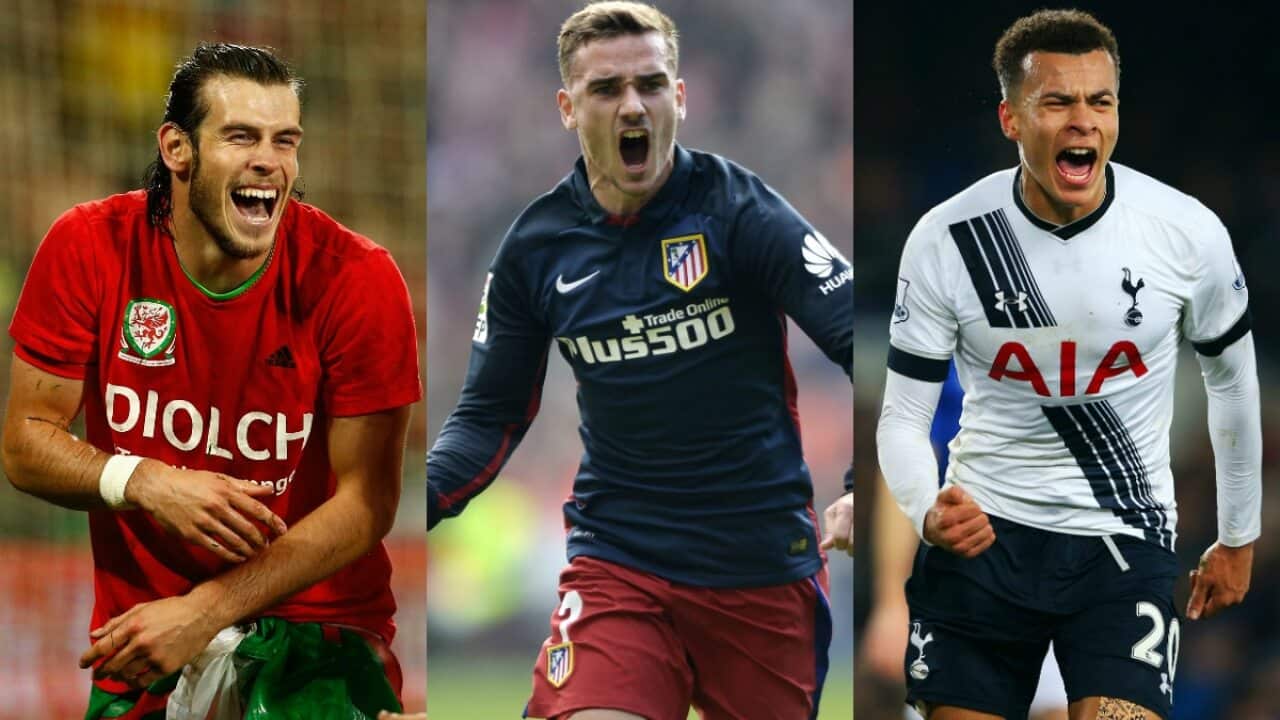 Bale, Griezmann and Alli will be chasing European glory for their respective countries in a matter of months Source: Getty Images

Advertisement
The 25 year-old Atletico Madrid forward is beginning to hit his peak at club level, and has also shown his capabilities at international level. A superb free-kick against the Netherlands last week was an example of how his club form is transferring to the international arena. With the ability to play anywhere along the forward line and even deeper, Greizmann may be given freedom to roam and should easily slot into an already vastly talented France attack.

He only made his England debut in October 2015, but already Alli is becoming a mainstay in the team, even wearing the coveted No. 10 shirt in the stunning comeback win over Germany. Alli is extremely gifted on the ball but it is his vision and creativity that will cause consternation in any opposing defence. Ready to link up with his Spurs team-mates for The Three Lions, EURO 2016 may be the spark for a glorious international career for the 19 year-old.

Finally, finally, Bale will have the opportunity to unleash his talents at a major international tournament. While his move to Real Madrid has possibly not been as fruitful as the Welshman initially hoped, he has continued to produce for his country and they will be looking to him for inspiration in a difficult group that includes England and Russia. With Bale on the prowl going forward, no opposing defence at the EURO can rest easy.

Even though Draxler is already a world champion with Germany, EURO 2016 may be the stage where he can cement his position amid a host of talented German attackers. Even in this group, the Wolfsburg creator stands out for his sublime technique, intelligent passing and immense composure in front of goal. Even when faced with tight defences, the 22 year-old is unfazed and seems to glide around them with effortless ease. Germany are already a major force and with Draxler in top form, they could be unstoppable.

Spain’s golden generation that included Xavi and Andres Iniesta may be coming to an end but Isco represents the next crop of players who are ready to step up for the national team. The 23 year-old Real Madrid midfielder has been part of the Spain squad for three years now, yet EURO 2016 is the chance for immensely talented midfielder to make his mark on the international stage. Equally capable of threading a defence, splitting passes or opening them up with a jinking run, Isco will be just as exciting to watch as his Spanish predecessors.

The 22 year-old Bayer Leverkusen attacker is bound to be one of the most sought after footballers in Europe after France 2016, if he isn’t signed by the likes of Manchester United before then. Playing alongside other exciting Turkish midfielders, like Arda Turan, will make this side one of the most entertaining to watch. Yet it might just be Calhanoglu’s superb free-kicks that make headlines around the world. He will be one to keep an eye out in open and play and over dead balls.

It was only after the 2014 FIFA World Cup that De Bruyne began to fulfill the potential that first led Chelsea to sign him. Since then 24 year-old hasn’t looked back and has adjusted well to life at Manchester City. A magnificent dribbler, he has the ability to open space for himself to unleash an unexpectedly powerful and calculated shot, or he can play others in for easy chances. With Eden Hazard well below his brilliant best, it may well be De Bruyne that drives this talented Belgium side to the latter stages at EURO 2016.

Just when you thought he would go down alongside the likes of Finn Jari Litmannen and Welsh wizard Ryan Giggs to never play in a major international tournament, Gudjohnsen may finally get the chance at age 37. Iceland’s greatest ever player appeared to have retired from international football in 2013 but made a triumphant return during the EURO qualifiers, and now he appears destined to get this chance at a major tournament. Most football fans are hoping he gets a chance at the EURO, considering his brilliant club career and how he paved the way for the current generation of Icelandic footballers.

The 21 year-old Monaco winger is part of an exciting new generation of Portuguese players and alongside Renato Sanchez may be the country’s best hope of taking the mantle from Cristiano Ronaldo. Not a mainstay in the team yet, the sublimely talented attacker could make his mark at EURO 2016, as the older generation showed they may be off the pace in the recent loss to Bulgaria. His ability to play in either wing or deeper centrally allows to combine with Ronaldo. With opposition attention bound to be on CR7, Silva may have the chance to thrive.

He is known as the ‘bad boy of Austrian football’ but Arnautovic may be finally settling down in the English Midlands as he starts to fulfil his potential on the field - without grabbing the headlines off it. Capable of the sublime on his day, Arnautovic will have to be in top form if Austria are to reach the knockout stage at the tournament. Drawn in a group in which they would believe they have a genuine chance of progress, France 2016 could well be Arnautovic’s big stage to thrive on.