The countdown to the A-League finals series begins this weekend and The World Game looks at how it might all pan out for your team over the crucial last 10 rounds. 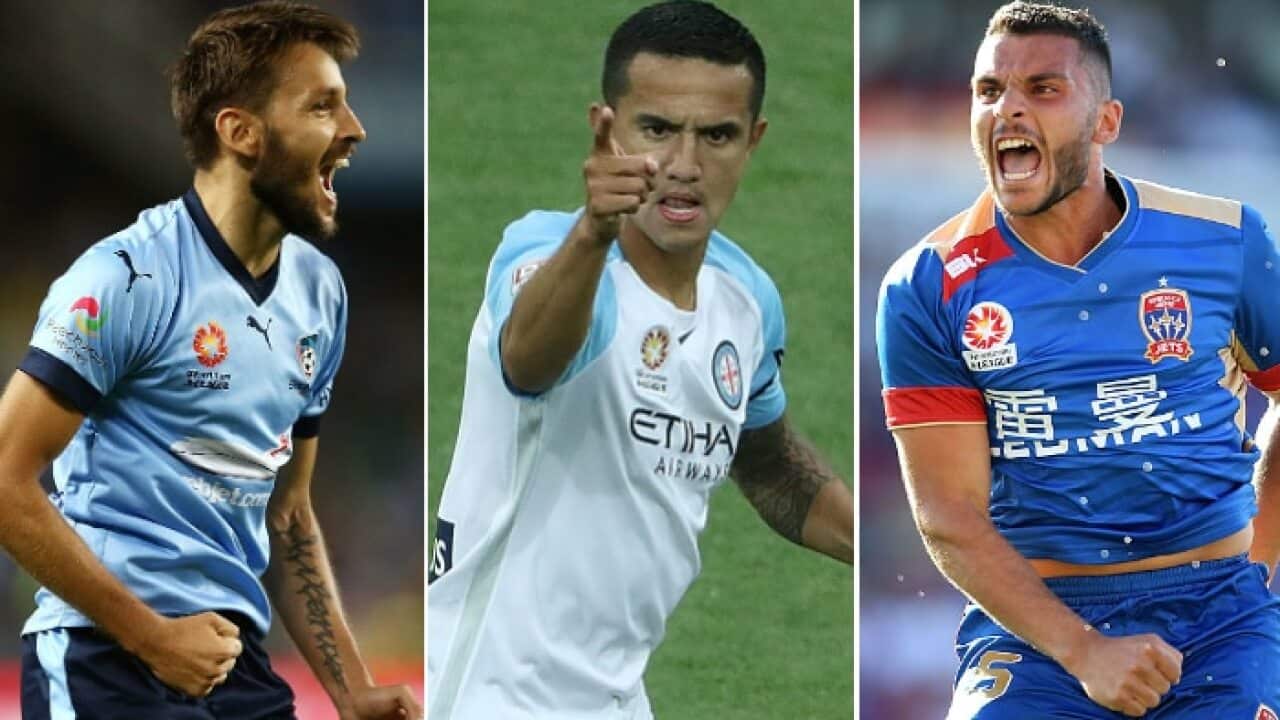 It's a guessing game, really, and my guess is that some team, somewhere, will get a win over them.

Advertisement
There's no point in trying to predict when it will happen - it could be when it's least expected.

Hopefully it doesn't happen, because having Sydney go into the finals trying to keep an unbeaten season alive would be exciting for the competition.

2. How big a difference will Ryan Griffiths make for Western Sydney Wanderers?

It won't hurt, but it's not going to make or break their season.

The Wanderers have been trying to find someone to add to their attack for a while now, so Griffiths was obviously far from their first choice.

He's a competitor, but he's also 35-years-old. If he can score a few goals it will be a good result.

3. Do Melbourne City need to change the way they play?

Yes. What they're doing at the moment isn't working and if they lose to Melbourne Victory in Saturday night's derby their hopes of an all-important top-two finish will be dashed.

A loss might even start putting pressure on them just to hang on to a top-four spot.

When you've got some big-name attacking players, yet opposition teams - and not just the top ones - become confident in their defensive plan against you, as Newcastle Jets were last week, it's time to re-evaluate things.

4. Are Brisbane Roar capable of breaking out with a few more goals?

They're third on the table, but they've scored the least amount of goals (23) of any team in the top six.

The two teams above them on the table, Sydney FC and Melbourne Victory, have scored 38 and 37 respectively.

Brisbane have got the second-best defensive record in the competition, conceding 21 goals, and that has kept them in good stead, but only one of their seven wins has been by more than one goal. They tend to try to sit on leads when they should be more proactive.

They've got the players to be more aggressive in attack, it's whether the Roar want to play that way.

5. Will Newcastle Jets make the finals for the first time in seven seasons?

Yes - as long as they don't lose either Andrew Nabbout or Andrew Hoole for an extended period.

Those two players hold the key and even when just one of them is out, the team's chances of winning take a big hit.

6. Will Kosta Barbarouses and Gui Finkler find their best form for Wellington Phoenix?

Finkler may never be as good for Wellington as he was for Melbourne Victory.

He fitted beautifully into a groove at Victory, but that same groove hasn't been there for him at the Phoenix and in recent weeks he has been coming off the bench.

It's still quite possible that Barbarouses could make a bigger impact than he has done so far this season, but they've got to find a way of bringing him into the play more.

7. Can Melbourne Victory get their groove back?

They've already done it once this season, so they can do it again.

The Victory didn't start the season well, drawing 1-1 with Brisbane Roar and then losing 4-1 to Melbourne City, but then they went on a run of 10 wins and a draw in 12 games. Now they're on a three-game losing streak.

When they bounced back before, all of their key men found form. Some of them have been a bit off recently, so they will have to find form again.

8. Who will finish bottom of the table?

Probably Adelaide United, which would complete a stunning fall from the Premiers' Plate and championship double they won last season.

They're currently in last place and it will either be them or Central Coast Mariners, who are just two points in front of them.

Adelaide and Central Coast play each other two more times - on Sunday and again in round 24 - and the Mariners are at home each time.

Adelaide's A-League season is gone, so they would be better off concentrating on the ACL.

Brisbane need to get past the preliminary stage by beating Global FC at home on Tuesday. That would lead to a play-off game away against Carlos Tevez's Shanghai Shenhua on February 8.

If they make the group stage, the Roar would play six games spread out from February 21 to May 10. The Wanderers meanwhile, are already in the group stage.

That schedule includes a midweek home match for both Brisbane and Western Sydney before the last round of the A-League and a midweek overseas game for both between the first and second week of the A-League finals, if they are still alive in the domestic competition.

Obviously, ACL commitments have the potential to punch a big hole in the A-League title hopes of either side.

10. Will Central Coast Mariners be the biggest nuisance team for finals contenders?

Yes. They hurt Perth Glory last weekend and they've got the spirit and determination to do it again.

Paul Okon's men can cause damage particularly at home - where several of their remaining games are against Melbourne Victory, in round 20, Melbourne City (22) and Newcastle Jets (26).