With the fence giving way at Newcastle's McDonald Jones stadium once more over the weekend, The World Game takes a look back in time to document the barrier's increasing role in A-League folklore. 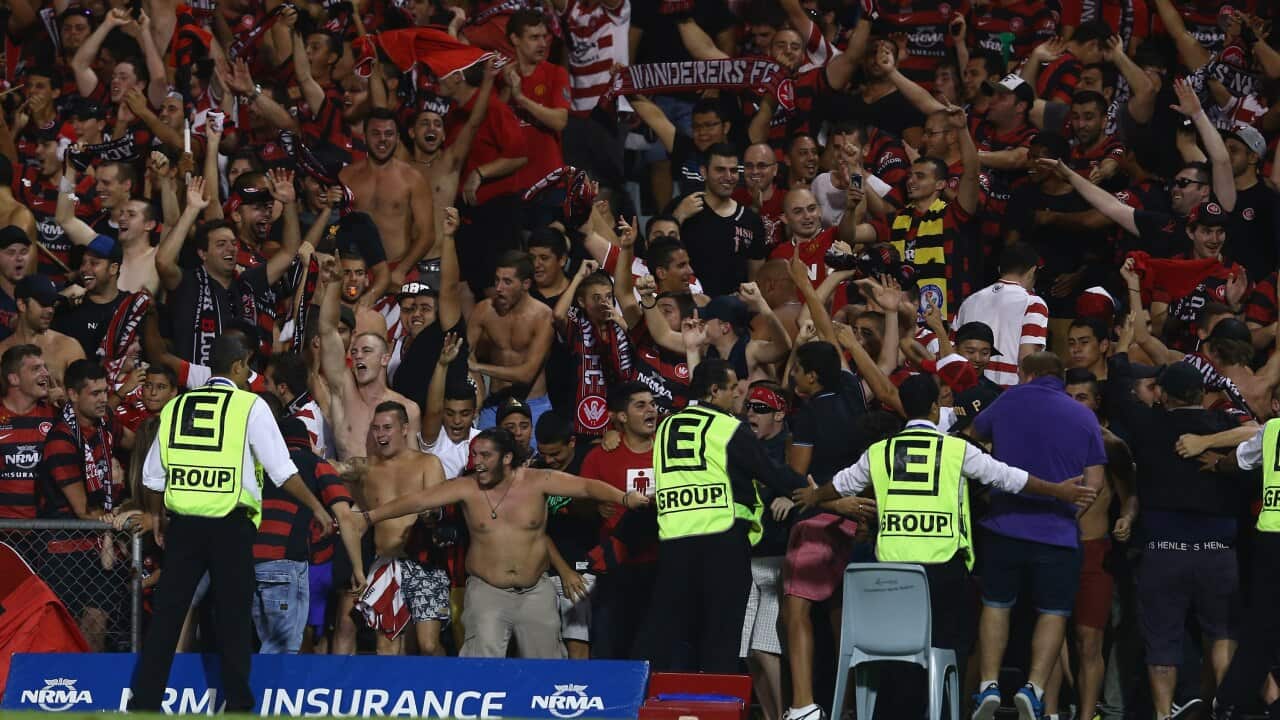 The collapse of the fence under the weight of celebrating fans reaching out to their heroes on Sunday wasn't the first time it had happened at that particular venue - it was actually the third.

Fans have also jumped the fence to join a goal-scoring celebration during a Sydney derby in 2014 and there was another incident where a fan arguing with players tried to jump the fence.

Then there was the supporter who got over the barrier in his underpants - and probably still wishes he hadn't.

Advertisement
With a number of fences at a number of different venues making past headlines, The World Game takes a look back at some of the biggest incidents of fencing failures.

It was a sign of improved times for the Newcastle team - but also further evidence that those metal fences at McDonald Jones Stadium are prone to collapse under the weight of a group of fans pushing forward.

Andrew Nabbout ran to a corner of the ground to celebrate with fans after putting the team 2-1 up against Perth Glory last Sunday and the fence couldn't take it.

2. The fence at Newcastle has the same rules for all fans

In the wake of the most recent collapse of a section of fencing last Sunday, Newcastle MP Tim Crakanthorp called on the State government to ensure the venue's safety and "guarantee that all of the appropriate maintenance works have been carried out at the stadium over the last five years".

Sydney were down 2-0 against Western Sydney Wanderers at Allianz Stadium in October, 2014, when they launched a tremendous comeback that finished with Brosque sealing a 3-2 win after the opposition had been reduced to 10 men.

Brosque took off in celebration towards the eastern side of the ground and dozens of fans jumped the fence to race in and swamp him and several of his teammates.

It was an obvious safety risk, but at the same time a brilliant moment.

The Wanderers were struggling in season 2014-15 and when they could only draw 0-0 at home against Central Coast Mariners on New Year's Day tempers frayed among their fans.

Some members of the Red and Black Bloc supporters' group made their displeasure clear as the players went to mix with them after fulltime and defender Shannon Cole responded by telling the fans the players were trying as hard as they could.

But some fans weren't satisfied with Cole's explanation and one of them appeared to try to climb over the fence, only to be stopped by security.

5. Two bad decisions and one good decision by this guy

The bad decisions? Jumping the fence at all, as Adelaide United were putting together a 3-1 home win over Sydney FC in March, 2014, and taking off almost all of his clothes before going ahead with his ground invasion.

The good decision? Leaving his underpants on rather than going the whole hog.

As the fan is being dragged off the ground announcer can be heard reporting the match attendance as 14,212. No doubt it was down to 14,211 soon after.