It's the most wonderful time of the year and, with the A-League season approaching its halfway point, it seems only right that we take a look at Santa's favourite players this festive season. 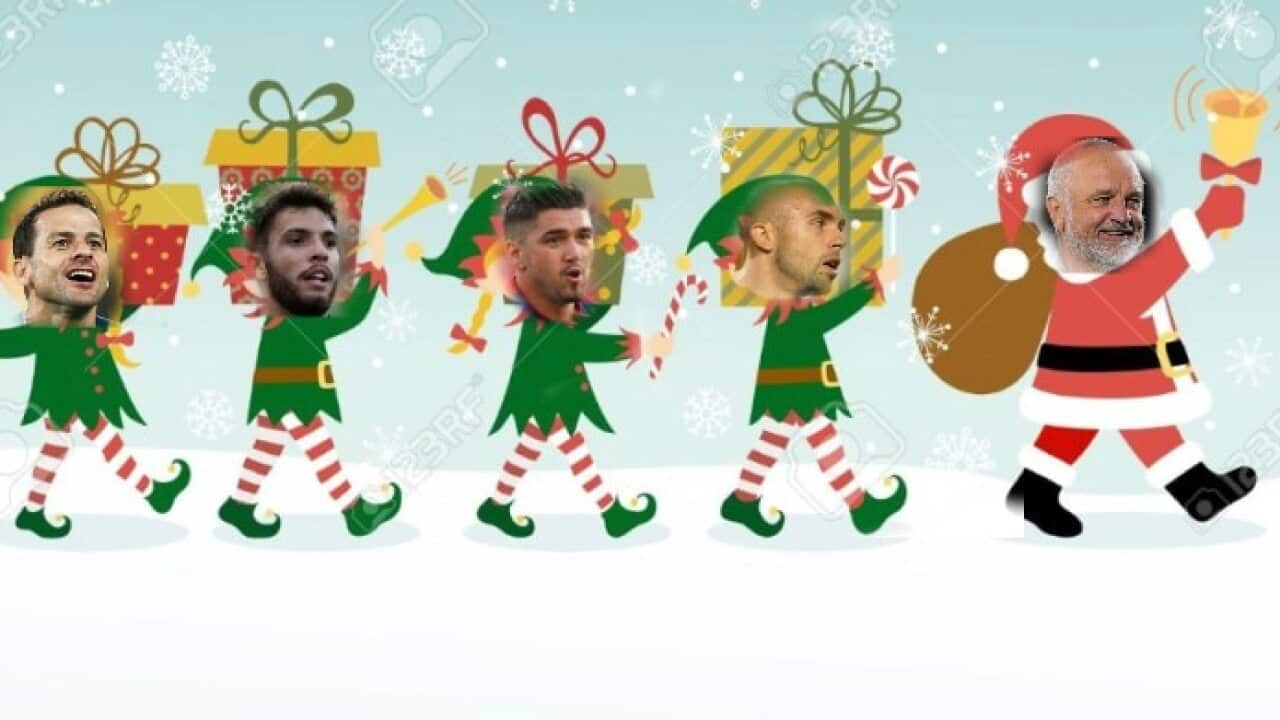 Sydney FC's Graham Arnold is the obvious choice to be the boss of this workshop, as his Sky Blues sit top of the league by five points - ahead of the Jets - and remain odds on favourites to repeat their premiership-championship double from last season.

Izzo has made a fantastic return to his home town of Adelaide, amassing 35 saves, the second-highest among goalkeepers, and one clean sheet as the Reds sit sixth on the league ladder with a game in hand.

While United have struggled with consistency, Izzo has been one of coach Marco Kurz's shining lights and - at just 22 years of age - has plenty of development left ahead of him.

It's been a breakout season for the 20-year-old defender, who has quickly become an influential member of the Newcastle Jets team.

His solid defence, great positional sense and marauding runs from fullback have provided an extra dimension to a Jets team which has been the comeback story of the season so far.

After arriving in the Harbour City midway through last season, as a replacement for the South Korea bound Matt Jurman, Buijs has quickly established himself at the heart of Sydney FC's Premiership-winning defence.

So influential has Buijs, and defensive partner Alex Wilkinson, been that Sydney have built on their incredible success from last season and boast the best defence in the league once again, despite the departure of Danny Vukovic in goals.

Schenkeveld has been one of City's best players this season. With Michael Jakobsen playing in midfield, The Dutchman has fit right into coach Warren Joyce's defensive regime and performed beyond expectations.

The 26-year-old has been impenetrable, producing 11 tackles, 35 clearances and 27 interceptions alongside Iacopo La Rocca to form the third-best defence in the league.

The veteran former Socceroos defender has been a handy replacement for the injured Rhyan Grant on Sydney's right flank.

While no longer possesing the speed of his younger days, Wilkshire's experience of playing in Europe has helped him continue to play impressive football in the twilight years of his career.

On of the most underappreciated members of Sydney's all-conquering team. Brilliante's control of the midfield and ability to link defence with attack has been a big part of the Sky Blues' incredible success.

Adding a few goals to his repertoire this season, the defensive midfielder is sure to be one of the first names on the team sheet for coach Arnold each week.

The youngest reindeer on the sleigh, De Silva has had a remarkable return to the A-League, after a rather frustrating spell abroad with Roda JC.

With two goals and an assist complementing his dangerous pace and skill on the ball, the 20-year-old's form this season has left fans hopeful of a maiden Socceroos call-up.

Mierzejewski's mark on the A-League has been well and truly felt in recent weeks, after the Polish international arrived as a direct replacement for the hot-and-cold Filip Holosko.

The 31-year-old has been an early Christmas present for the defending A-League champions, finding the back of the net five times, producing two assists and dazzling opposing defences as last season's player of the year, Milos Ninkovic, struggles to get back into the side.

An early bolter for the Johnny Warren medal after an incredible first half of the season.

Petratos has been everything the Jets could have wanted and more, after arriving at the club at the start of this campaign.

His goals, creativity and vision have given Jets fans plenty to cheer about.

Nabbout's energetic performances and eye for goal have helped the Jets maintain their meteoric start to the season, despite the loss of star striker Roy O'Donovan to a long injury lay-off.

Forced to play more centrally, instead of on his preferred right wing, Nabbout has terrorised defences and helped Newcastle to the best attacking record in the league.

The Brazilian sits at the top of the Golden Boot rankings with ten goals after a strong start to Sydney FC's title defence.

His combination with Alex Brosque makes for one of the most feared attacks in the competition.

A rare brightspot in what has been a tough season at Wanderland.

A big part of the Sydney FC attack, despite playing in defence, Zullo's overlapping runs have been a nightmare for opposition sides.

A powerhouse in the Mariners midfield, Brama has helped add much needed defensive steel to Paul Okon's side.

The Dutch winger has been a quality addition to Kevin Muscat's side this season with his free-kick ability rescuing points for the Victory more than once.

Tied for third in the Golden Boot stakes, despite being cursed by injury this season.

Unlucky to miss out on the Santa (coaching) role after leading the Jets' unbelievable turnaround from A-League easy-beats to title-contenders this season.

"6:30, dinner with me. I can't cancel that again." Tim Cahill and Dr. Seuss' popular children's character, the Grinch, played by Jim Carrey in the film (2000) based on the same name, share quite the connection this time of year, with the Socceroos legend opting to depart Melbourne City just weeks before his beloved kids gear up for Christmas.

Cahill had managed just six appearances this season, without a goal to his name, and left the club on a sour note after reports emerged that he had fallen out with City coach Joyce over his lack of game time in the lead up to next year's FIFA World Cup.