Football Federation Australia do not need any more evidence of players trying to get opponents sent off by play-acting to make a firm stand on the latest scourge to hit the A-League. 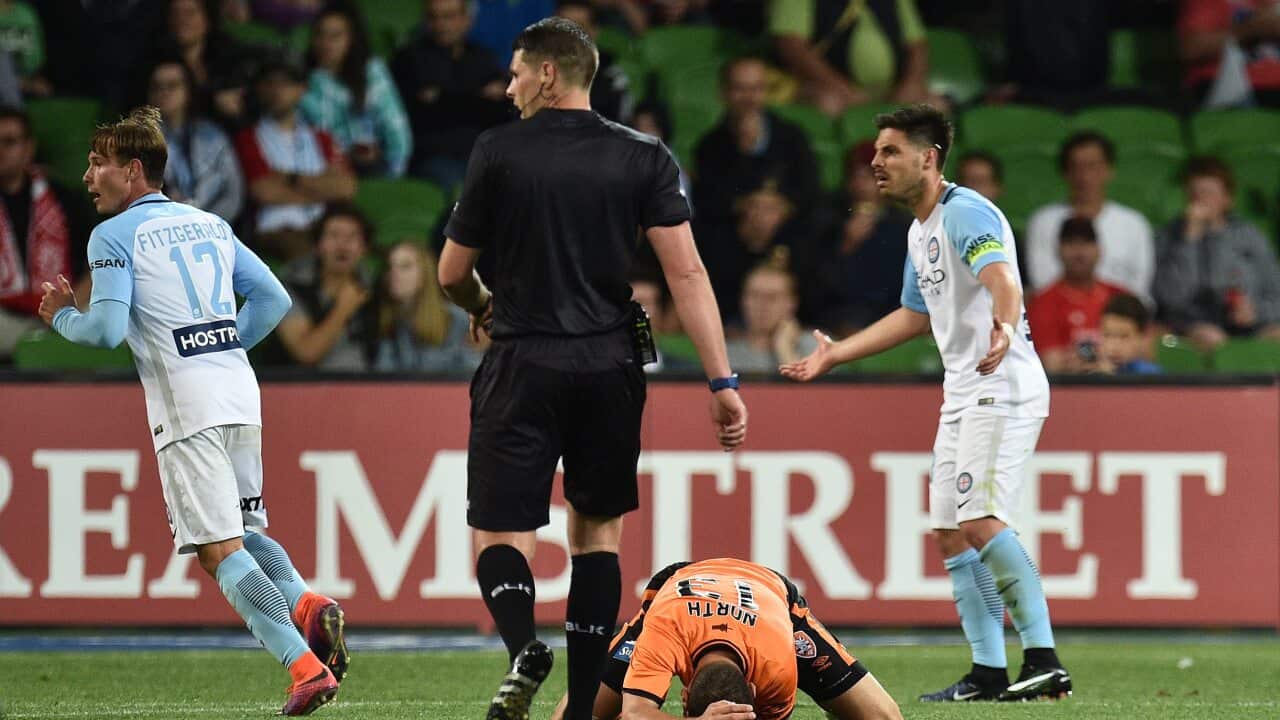 Jade North lies on the ground after the clash with Bruno Fornaroli Source: AAP

This despicable behaviour is unacceptable in Australia and if FFA continue to do nothing about it essentially on the grounds that it is not there to referee games retrospectively this pattern no doubt will become the norm.

Advertisement
FFA try to control every facet of the game in Australia and Oxford Street simply cannot dismiss such a serious problem as something outside its jurisdiction.

In a way poetic justice was served on Saturday night because while North was lying on the ground pretending he had been hit by a truck City scored the equaliser that gave them a 1-1 draw.

That should not be the end of the story, however. FFA must come down hard on North regardless of whether the referee saw the incident or not.

City's Neil Kilkenny was involved in a similar shenanigan in the match against Adelaide United in October when he tried to get Isaais sent off by theatrically falling to the ground after a little clash.

FFA could not do anything about it because the matter had been dealt with by the referee on the pitch and the matter was not seen as serious enough to warrant the match review panel's intervention.

This is basically where the problem lies: if the rules do not allow for such retrospective intervention, FFA should change them.

The A-League's image is at stake here and it is FFA's responsibility to protect it.

It is a fact of life that no sooner does a young footballer with a few silky skills get a chance to play abroad than he will take it with open arms and probably with eyes closed.

The A-League has done a great job of giving Australian footballers a means of earning a decent living in a professional environment after the break-up of the National Soccer League.

But the A-League will never be able to remotely compete with the Europeans and Asians when it comes to earning power.

So as soon as our promising players hit the A-League, have a few good games and earn a couple of rave reviews they and their eager agents will cast their attention on the greener pastures of football abroad.

Little do they realise that for every success story like that of Harry Kewell, Mark Viduka and Tim Cahill there are plenty more incidences of heartbreak, misfortune, broken promises and desperate, lonely fights to beat formidable odds just to be able to survive.

It's not the first time that promising Aussies with stars in their eyes were blinded by the prospect of fame and fortune and wasted the formative years of their careers by sitting on benches, playing in sub-standard leagues or not getting a run at all, often being forced to return home to 'start all over again'.

FFA and the A-League are powerless to stop any person above the age of 18 from going abroad and working wherever he likes.

Telling a teenager who thinks he's special to wait for the right time, play a couple of strong seasons in the A-League and choose the right foreign environment in which to display his skills is unlikely to be met with much success.

If a player has the opportunity to play abroad nothing or no one will stop him if he really wants to go.

It's a bit like worried parents urging their teenage sons or daughters to stop seeing partners who might appear to be dubious characters. It's often very hard to make them see sense.

So if players cannot be stopped from following their dreams albeit at a premature age, this is where education and awareness should come in.

FFA established a player mentoring role a few years ago that was taken up by former Socceroos star Craig Moore.

The two-time FIFA World Cup defender who forged a long and chequered career in Europe appeared to be the perfect man to guide our young stars through the treacherous waters of foreign football.

Moore is now Brisbane Roar's director of football but he was not replaced at FFA. So it would appear to be an opportune moment for FFA to rekindle the role and expand it into an independent advisory commission of, say, three of four former Socceroos with the job of seriously lecturing our young players about what it means and takes to venture abroad.

No player is the same and there is no hard and fast rule that stipulates when is the right or wrong time to go abroad so every case would have to be dealt with accordingly.

Look, if ambitious players really want to test the foreign waters no amount of guidance would stop them. You can take a horse to the water but you cannot make it drink.

Many will not heed the advice but if such a panel can nip some potential player problems in the bud and 'save' a few careers by persuading players of the right time and place to follow their dreams it would have served its purpose.

Our football would be the winner in the end.