Julian Alaphilippe (Deceuninck-QuickStep) overcame the fierce acceleration of Primož Roglič (Jumbo-Visma) to win for the third time atop the Mur de Huy in the 2021 edition of Fleche Wallonne. 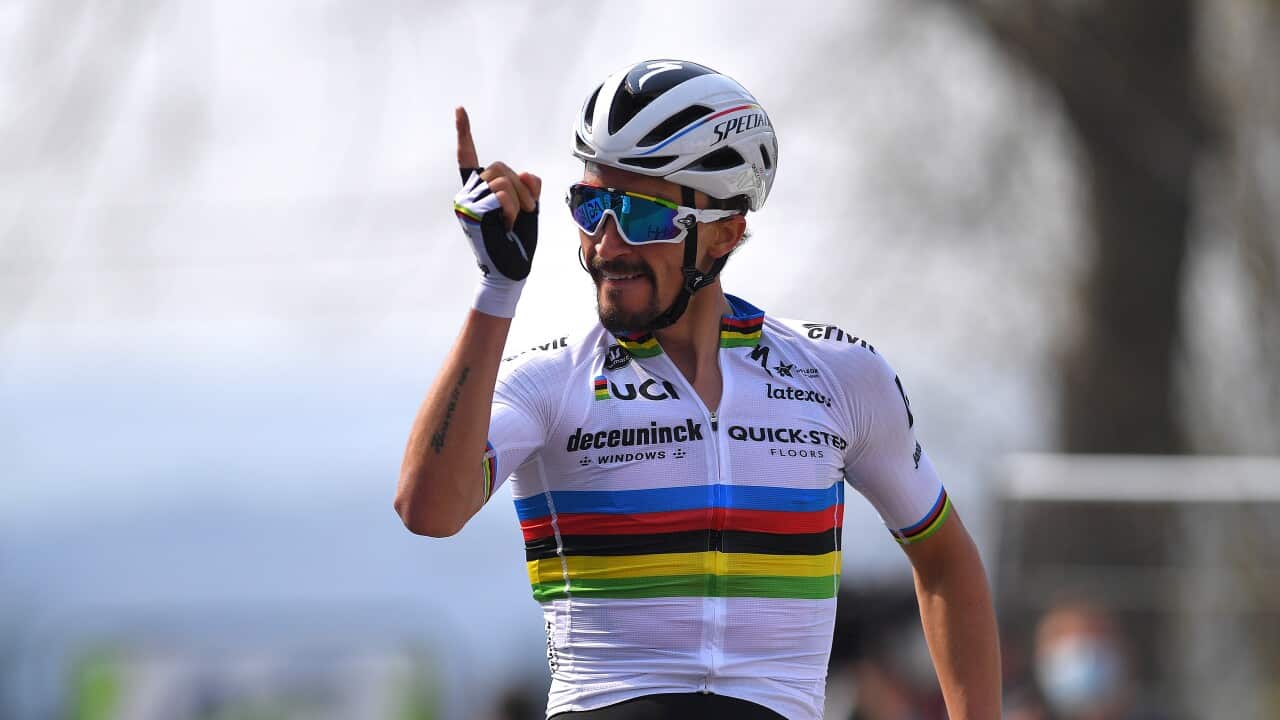 Roglič was the first of the favourites to hit out on the final climb Fleche Wallonne but Alaphilippe jumped soon after in pursuit and was able to come level with the Slovenian star before passing him on the false flat uphill into the finish, claiming the win with an emphatic finger-wagging salute.

“I wanted to show people I was strong in the head," said Alaphilippe. "I haven’t won a lot since the beginning of the season, it was important to me to raise my arms again. I wanted so much to win again on such a hard race."

The reigning world road race champion had been in indifferent form for his normal high standards, coming into the race with only the single victory on his 2021 season at Tirreno-Adriatico. However, he returned to a favoured stomping ground at Fleche Wallonne, a race that he had won twice already, the 2021 race now making that a hattrick.

Advertisement
"I’m proud of my teammates, they did a wonderful job to put me in the best position. Mikkel Honoré dropped me in perfect conditions at the bottom of the Mur de Huy. Then, the legs do the talking. I knew it wasn’t gonna be easy with Roglič, Valverde and everyone in my wheel. This one really feels good, with the jersey.”

They got out to a maximum advantage of five minutes and 15 seconds before the peloton committed consistently at the front of the race, with a number of teams contributing the pace-making.

Howes was in a near-constant battle with his equipment at the front of the race, changing onto a neutral service Shimano bike, then back onto a spare team bike later as he battled his way back to the leaders.

The pace picked up on the second of three ascents of the Mur de Huy, as attackers began to make their way clear of the field to try and establish a threat off the front of the race. The peloton quickly neutralised those moves, but the advantage of the break was coming down rapidly, just over a minute's lead remained with 30 kilometres remaining.

The breakaway was down to just Moniquet, Vervaeke, Armee and Lammertink as the peloton closed the gap down to a bridgeable distance on the Cote du chemin de Guesues. Tim Wellens (Lotto Soudal) and Omar Fraile tried to launch an attack, but the peloton kept the pace high behind and Lammertink was the only rider left out in front as the peloton got ready for the run into the Mur de Huy.

The Dutch rider was swept up on the early slopes of the Mur de Huy as the peloton led out their chosen climbers into the foot of the famous climb.