All-out assault on Herald Sun Tour, next stop the world for Berwick

An all-out assault in the final kilometre of the Mt Buller climb saw Sebastian Berwick drop everyone except Herald Sun Tour leader and eventual Stage 4 winner Jai Hindley. While his story was quite a different one only 12 months ago, the sky is surely now the limit for the 20-year-old. 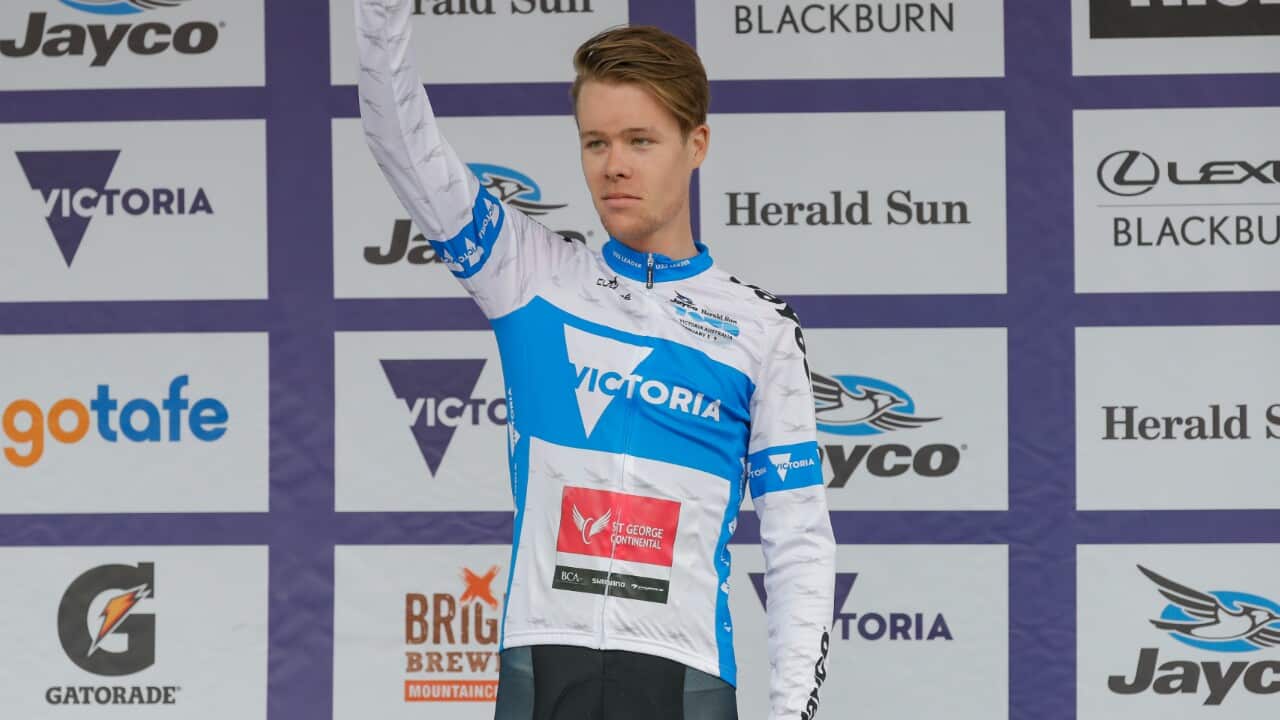 The St George Continental rider's final attack started at the appropriately named ‘Hell Corner’ where the road averages approximately 12 per cent into the finish.

Late chancers James Piccoli (Israel Start-Up Nation) and Simon Yates (Mitchelton-Scott) hung out in front of the peloton, but Berwick sailed past both with only Hindley (Sunweb) and Jesse Ewart (Team Sapura) able to keep pace.

Ewart dropped off as Berwick continued driving towards the finish, Hindley edging along the inside as he struggled to overcome the youngster. The race leader just pipped Berwick over the top but the 20-year-old impressed many with his phenomenal power, including Hindley.

Advertisement
“Hats off to him,” Hindley said. “he threw the kitchen sink at me today. He was super impressive, congratulations to him.”

A year ago, Berwick was nursing broken bones after a stick got caught up in his wheel while riding to the start of Stage 1 of the 2019 Herald Sun Tour.

Fast-forward through a solid but far from outstanding season racing in Asia with St George Continental and it appears the young climber is hitting his straps.

“I’m pretty happy with that,” Berwick said. "The team rode well all day, helped me get out of the wind, put me up front, then in perfect position on the climb. I just had to finish...30 minutes effort that’s all. It’s great to finish it off for the team.”

The St George Continental team is a fixture within the Australian cycling scene, riding most of the big races in Asia with riders primarily from Australia and New Zealand.

Berwick described the process of preparing for the climb with experienced coach and developer of Australian cycling talent over many years, Dave Sanders.

“Me and Dave Sanders, we did this bloody last kilometre and a half, four times in the car yesterday,” Berwick said. “He was hyping me up for this last bit, saying, ‘if you’ve got anything, just go now matey’.

“With a kilometre and half I was thinking ‘maybe go now, it’s still a big group!’ Then going around that bend with a kilometre to go, I thought ‘let’s go, if they can hold on good on them. If I win then shit, that’s great’.”

The Queenslander joined the NSW-based team after a year of cycling in France with the AG2R La Mondiale development team, but has found the opportunities at St George Continental second to none.

“It’s the best decision I’ve made to join this team,” said Berwick. “The guys have been so positive, and I’m just pleased to pay them back and give them a result they deserved.”

The sky is the limit for Berwick’s ambitions, similar to his ability to climb the highest mountains, with his top-three finishes on Falls Creek and Mt Buller.

“I really want to go WorldTour, to the top of cycling,” he said. “Being able to make a living out of the sport, I couldn’t think of anything better than that to do with my life to be honest."

"Hopefully, people see this and go ‘shit, this guy is all right at riding bikes’.”

Berwick is going all-in for the pursuit of this cycling dream.

“Completely put everything on hold for cycling at the moment," he said. "I don’t want to go be in a job for the rest of my life that I don’t really like. I just want to give it my all and see if it can get me somewhere. If not, then I’ve tried.”

He comes from good cycling stock, with his father and grandfather both cyclists.

“(They've) always ridden, won some Australian titles,” Berwick said. “My grandfather – back when it was a handicap – was fastest time at Grafton to Inverell a couple of times, so I was always into cycling.

“It was always in my vision in some way, whether I realised it or not. Probably started racing when I was 13, just not taking it seriously, riding around and what not. In Under 17s I thought shit, going all right and won an Australian national title. I just thought go for it and see where it takes us.”

Berwick finished second behind Jarrad Drizners (Hagens Berman Axeon) in the 2020 Under 23 Mens Road Race, with the slight framed Queenslander dancing away up Mt Bunniyong before Drizners beat him in the sprint.

While the three-kilometre climb of Buninyong didn’t really offer Berwick the opportunity to stretch his legs, the St George Continental rider shone on the long climbs of the Herald Sun Tour.

“There haven’t been many of these real big climbs,” said Berwick. “I did a couple of ones in Asia and what not. Having that extra year of tours and maturity has proven to be so helpful for this Tour.

“I told the guys at the end of last year if they just give me a bit of rest I’d come back for this first half of the season flying and get some good results.

"I’ve proven that I can, and just happy to give back to the team for all the work they’ve put into the team and the opportunity to do so.”

Berwick sits comfortably in second overall, 10 seconds behind Hindley and 26 seconds ahead of Damien Howson (Mitchelton-Scott) coming into the final stage, a fast criterium around the Royal Botanic Gardens in Melbourne.

“There will be plenty of hype tonight,” Berwick said of his plans to celebrate the performance, “and tomorrow night is going to be good.”