An hour of solitude: Rohan Dennis on "The Hour"

It’s two sleeps now until Rohan Dennis turns himself inside out in pursuit of the UCI World Hour Record. The mark to beat 51.852km, held by Matthias Brandle, cannot be underestimated after Jack Bobridge’s recent near miss. 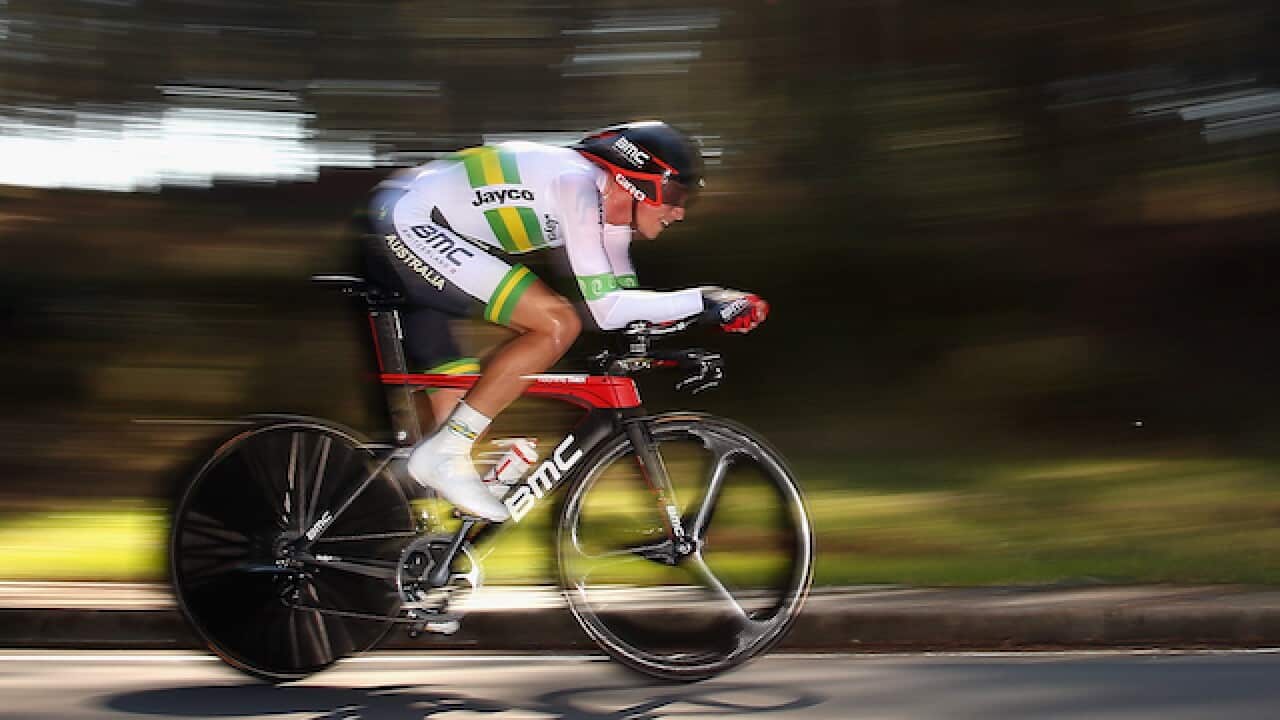 But there's little sign of increased anxiety, or nerve from Dennis speaking to him. Sitting in his hotel room in Grenchen, Dennis is relaxed, seemingly buoyed by confidence after his recent success at the Santos Tour Down Under, and almost unfazed by what's ahead of him Sunday. The work has been done, you see, it's all behind him, and now come only the finishing touches. In the last week, Dennis explains he's been experimenting with minor differences in pacing, gearing, wattage, but he's already got more than a good idea of what's to be expected. Dennis began his preparation for the Hour back in mid-November, with regular sessions on the track fit around his normal road training. By December he had a strong base, and after January he's feeling more comfortable in his position, and in the idea of riding a fixed gear for an hour, than ever.

Is there a sense of pressure after Bobridge's attempt, thoughts of what if? In short, no. In fact Dennis is firmly of the belief that had Bobridge not gone out as hard as he did he would've easily overtaken Brandle. The fact that he didn't, offers Dennis, is a bonus, because "I was afraid of what he might have set if he had a good ride, and what that could have meant for my own ride.

"I didn't watch Bobridge's ride live, but I did watch his splits," Dennis tells Cycling Central. "I was on the plane, flying from Dubai to Barcelona, and I had Wifi, I followed it that way."

Advertisement
"But what I did notice, and what a lot of people have said is that there was no reason why Jack couldn't have broken the record at all. He had the form, he had the pedigree, the track experience - it was just his pacing that was off. That was it. It's within his reach if he tries again. But I'm still just as confident as I was before Jack's attempt.

"It's almost a little bit of a relief - not that I was hoping that Jack wouldn't break the record - but it does take some of the pressure off myself."

Dennis bullishly says he's aiming to break 53km if everything goes well, but the team has set a more conservative 52.5km pacing strategy as the mark they're trying to work toward. Whatever happens, Dennis says he won't be attempting another Hour for quite some time, but he fully intends to do it again when he's a fully developed rider, perhaps in his 30s.

For the full interview, see the transcript below.

SBS 2 will be broadcasting Rohan Dennis's Hour Record attempt live from 2350 AEDT. The event will also be streamed online at Cycling Central.

Al Hinds: Rohan first up, what do you think of The Hour as an event? This is an event where you're out, alone against the clock, where there are no other riders, there's no direct competition other than the mark itself, the record, it's unique. Does that add pressure - knowing it's only you?

Rohan Dennis: Yeah it's something I have thought about it. It isn't like a road race or a time trial, where sure, you're worried about your performance but there are others. That I'm the only one out there, all the eyes are on me, it does a little bit of pressure. But coming from my track background, the mentality is very similar to an individual pursuit.

AH: When did you start thinking about making an attempt?

RD: I never really put much thought into doing it until Jens (Voigt) did it last year. It was only then that I became aware that the rules had changed. Had Jens not done it, I don't think I would've even looked at doing it because I wouldn't even have known the rules, it really wouldn't have been on my radar. I think the changes.. it's created a lot more attention around it and it's a lot easier for a modern rider to attempt it. We don't have to change anything with our position, or our equipment. It's basically the same as our time trial setup.

AH: ..It's made it a lot more accessible, to cross over, you don't need to, as Fabian Cancellara was experimenting with, to fit yourself with a specialised bike, it's a lot easier to manage..

RD: Yeah, exactly. I'm lucky enough to be riding a bike in a BMC, that is exactly the same on the track as they are on the road. It's the same geometry, the only thing is it has no brakes, and no gears. That's great for me because I'm really familiar with this bike (BMC Track Machine), I've been riding on it for more than six months. It means I don't have to spend those hours on the track that I might have had to. It does make preparing for road races, and the hour at the same time, a lot easier. A lot more doable for someone like myself.

AH: What's the preparation involved exactly, how long have you been working toward Sunday?

RD: I've been on the track since mid-November. Mid-November was my first session, and I've been stepping it up slowly. It started with a couple of 10k efforts to just sort of get back into the swing of things. I was still riding road the same day, I was balancing the two. My training would change the closer I got to nationals, I had to shift more to the road, but I was still doing similar efforts to what will be required Sunday. That work has made the practice efforts we've done here in Switzerland a lot more comfortable.

AH: Out of interest, what's the longest effort you've done with the bike on the velodrome in Switzerland?

RD: To be honest... Since I've been in Switzerland the longest effort have been no more than three kilometres. But that's more because the work has already been done and now we're fine-tuning, things like pacing and gearing, getting used to the track. Today was basically a dress rehearsal though. We did a 30 minute effort at full pace. The aim was to get to halfway, half distance, and to not feel like it's easy, but feel like there was something in the tank for that second half - which there'll have to do Sunday.

AH: Have you done any full hours? Even semi serious attempts last year?

RD: No, not at all. Nationals was the one big hit-out that we were looking for. It was within eight, nine minutes of the hour. What I was aiming for there is obviously the win, but was also gauging my average cadence, and it was a little bit higher than it would've been had I done a normal preparation on the road. I think it was about three or four average pedal strokes higher than what I was doing at Worlds, which is small but not insignificant. It's a good sign that I'm able to keep that cadence up and hold it for near an hour because that's what I'll need to be doing for The Hour.

AH: What exactly do you need to be producing to knock the record over? What sort of power are you looking at - I imagine high 300s? What's the mark you're aiming at?
RD: Yeah, I think it'll be in the high 300s (Watts). But my goal is to get into the low 400s. At the moment we're not 100 per cent sure if that will be possible. We have a rough idea that the high 300s will get me the record, around the 52km, 53km mark. A little bit of that comes down to conditions on the day too, how well I'm riding on the track, how smooth I am. If I look at my nationals, my power was right up there, the high 300s, but that's also taking into account an effort where there are moments of rest, where I can change gears, where I can coast for a moment, where I can get those couple of seconds of respite, some rest. That's the hardest thing. You can look at your time trial power and say - I can hold 400 Watts for an hour, but realistically can you do that if it's continuous pedalling? That's completely different, and that's sort of an unknown.

AH: And what kind of gearing would that be, like a 106inch roll-out?

RD: We're looking at somewhere between 106, 110. I've seen a lot of data on previous record holders. All of the ones that have gone quite well - other than Brandle, he's a bit of an anomaly - have gone 100-105. More often than not that gives you the cadence you need. That's a 55-14. I think that's a 108 roll-out. We're going to run with that, more than likely.
AH: I'm sure you're not thinking about, or perhaps don't want to think about it, but if you miss the mark, are you open to doing it again, say within a week, or is this it?
RD: Probably not. To be completely honest with you. To be completely blunt. I've set Sunday as the day. Our aim is to do the record. If I don't get it, I don't get it and maybe I'll come back in a couple of years. Or when it suits my race program for the road again. It's a big financial investment from BMC, a big commitment. To do it twice in a week would be a big ask of BMC, and I don't expect that.

AH: So this is I suppose the one big effort you'd like to do? As far as you're concerned this might be your only attempt?

RD: It all depends on what other guys do in the future, but the big name we have to look forward to seeing is (Bradley) Wiggins. If he, or someone else doesn't beat the mark I set, then I might not try it again until they do. If I get it, that's great. If I lose it, well it won't worry me. I don't want to try and break it again until much later in my career. I really only want to do it twice. But the next time I do it, if I do it, I want to be at my absolute physical peak.

RD: We're aiming for 52.5km. Personally I'm going to try and aim for something higher, my own personal goal would be 53. If I do not get 53, but I get 52.5, I'll still be happy. If everything goes perfectly then no matter what the mark I'll be happy. The key is to break the record. The key is to break the record. I don't want to walk out of that velodrome without the record. If I beat it by one metre and finish on my hands and knees that's also okay with me. If everything goes perfectly, 52.5km or more.

SBS 2 will be broadcasting Rohan Dennis's Hour Record attempt live from 2350 AEDT. The event will also be streamed online at Cycling Central.