Angers third after bouncing back to sink Monaco

Cheikh N'Doye's double helped lift Angers up to third place in Ligue 1 after a convincing 3-0 home win against second-placed Monaco. 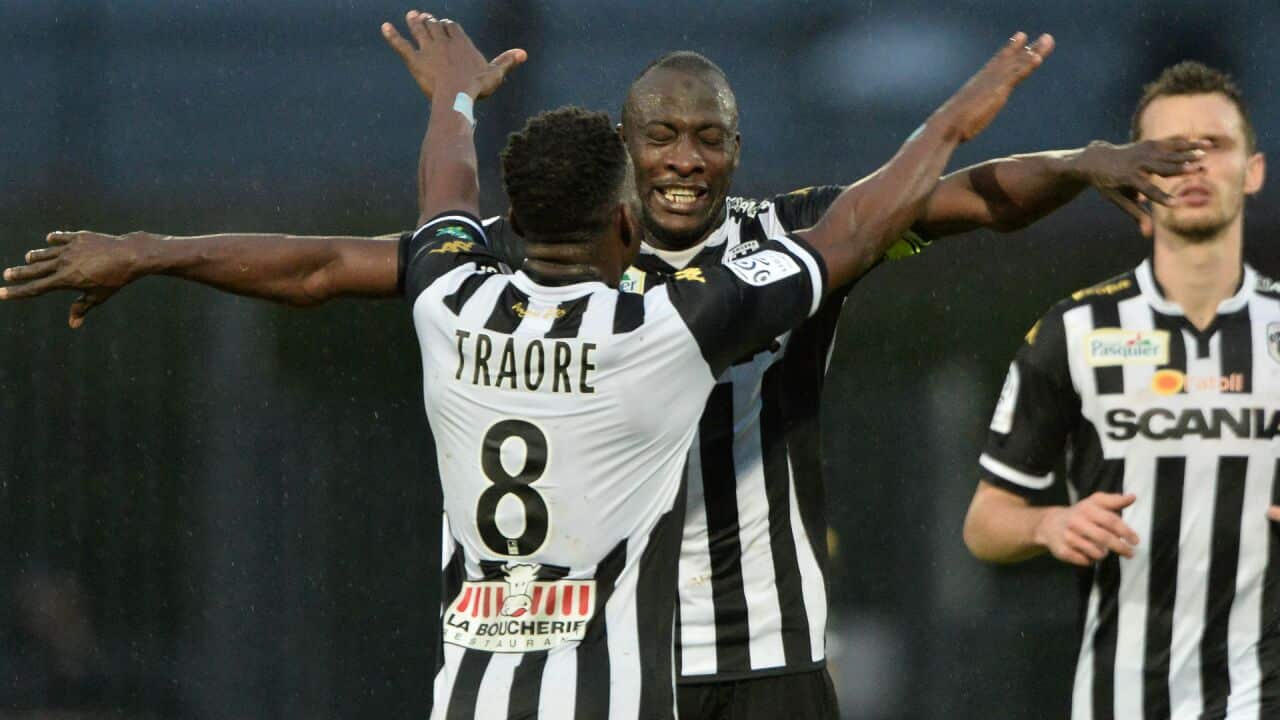 Cheikh N'Doye celebrates after netting one of his two goals Source: Getty Images

Senegal international N'Doye struck twice from close range in the 19th and 43rd minutes and Mohamed Yattara sealed victory with a third 10 minutes into the second half.

Angers, promoted at the end of last season, bounced back from last week's 5-1 thrashing at runaway leaders Paris Saint-Germain to halt a three-game losing run in all competitions and climb to within two points of Monaco, who slipped to their first defeat in 10 league matches.

PSG will bid to extend their 21-point lead at the top on Monday morning (AEDT) when they travel south to face St Etienne.

Advertisement
Lyon's hopes of European football were dealt a blow as Bastia striker Brandao struck the game's only goal in the second half.

Bastia were reduced to 10 men in the 88th minute when defender Gilles Cioni was hown a straight red card for his crude challenge on substitute Clement Grenier.

Lyon trail fourth-placed Rennes by four points, while Bastia - with Francois Ciccolini returning for his second spell as coach - put more daylight between themselves and the relegation zone.

Nantes extended their unbeaten league run to nine matches with a 1-0 win at Troyes, who have yet to win at home in the league this season.

Nantes defender Guillaume Gillet scored the only goal four minutes before the interval.

Lorient defender Zargo Toure struck twice in a 2-0 home win against Reims to secure his side their first win in five league matches.

Toure scored in the 15th and 51st minutes as Reims' winless run was extended to eight games in all competitions.

Montpellier boosted their relegation fight by snapping a run of four straight defeats in all competitions with their biggest win of the season, 4-0 at GFC Ajaccio.

Montpellier went in two up at the break through striker Mustapha Yatabare and Jonas Martins's penalty before midfielder Bryan Dabo struck twice in the space of five minutes early in the second half.

Second-bottom Toulouse are now five points from safety after losing 2-1 at home to Guingamp.

Guingamp went ahead through midfielder Younousse Sankhare's 12th-minute opener and although Wissam Ben Yedder (64) equalised from the penalty spot, Jimmy Briand struck a 74th-minute winner for the visitors. Issa Diop was sent off for Toulouse late on.