Ernie Merrick is convinced veteran Archie Thompson still has what it takes to play in the A-League again next season – and not just for one of the struggling clubs that is desperately trying to find an answer. 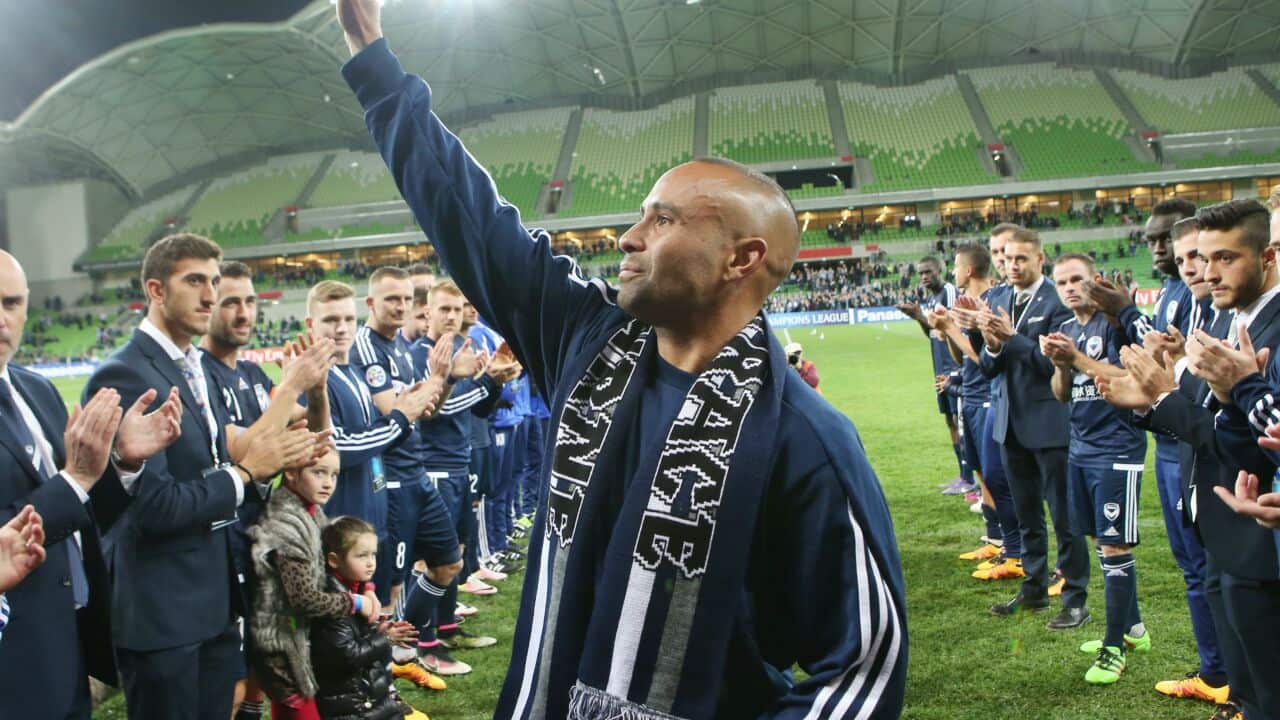 Merrick, who coached Melbourne Victory to win two A-League championships with Thompson as a star player there, said that if one of the leading clubs wanted to pick him up they would have a fantastic option off the bench when they were chasing a goal as the game wore on.

Thompson has finished up at Victory, where he had been for all 11 seasons of the A-League.

It was recently announced the 37-year-old would not be in their squad for next season, but Thompson made it clear he was keen to play on.

Advertisement
At what level that may be remains unclear. Victorian NPL 2 club Whittlesea Ranges, who are chasing promotion to NPL 1 next season, wants to sign Thompson now and has the sponsorship backing to put together a genuine offer.

Other non A-League clubs are understood to be interested as well.

But it may be that Thompson wants to have a break first and see what interest may develop from A-League clubs.

Central Coast Mariners and Newcastle Jets have each been mentioned as possible suitors, but it is not clear at this stage whether either have a genuine interest in signing him.

Wellington Phoenix coach Merrick revealed that when circumstances left him short of players up front midway through last season he tried to sign Thompson.

“Archie is a wonderful player and after 11 years I think he’s still good enough to be a part of an A-League squad,” Merrick told The World Game.

“Last season I was keen on him. We were very light up front with Roy Krishna having a severe injury and Jeffrey Sarpong not working out, so in January I gave him the offer of coming across to us until the end of the season.

“But he was beginning to get some good game-time at Victory and he opted to stay there and I thought that was a good call by him.

“This year we’ve signed Kosta Barbarouses and an attacking midfielder in Gui Finkler and young Hamish Watson, a local player, and we’ve still got Roy Krishna and Blake Powell, so we really don’t have a spot up front.

“But I would be very surprised if an A-League team doesn’t pick Archie up if he decides to play on, because he’s still good enough. He might not be able to play 90 minutes, I’m not sure. Obviously a role would have to be tailored to him. But off the bench I think he’d be deadly.

“If we hadn’t signed all the players we’ve signed I’d certainly be interested in him as a squad player for us and I think he’d do a good job.”

Merrick said Thompson’s positive influence on a team extended way beyond his well-acknowledged exploits on the field.

“I have no doubt he could play in the A-League and I’d like to see him playing in it, whether he starts and lasts as long as he can or comes off the bench,” Merrick said.

“He’s got more than just the ball skills that you see, what he’s got is an incredible ability to be in the right place at the right time and that takes a lot of learning and a lot of training and playing, so he could just pop up and score a goal. That’s one thing.

“The second thing he brings is tremendous enthusiasm at training. He’s full of life, full of fun and he helps with your team culture because he’s very optimistic and very keen.

“He’s really good with the young players as well, so I think he would complement a team in a number of ways and be a very worthwhile squad player.

“I would think there would be several clubs keen on him and not just the clubs lower down. I think he would be a tremendous asset to clubs at the higher end. It’s all about scoring goals and here they could have somebody on the bench who could keep on doing that.

“No-one has scored more goals in the A-League than Archie. He scored five in a grand final. So I would think any club at any level in the league could use him.

“Look at Adelaide, they used Pablo Sanchez so well off the bench last season and they’ve released him now and that’s the type of player it’s good to have. It’s a concept that has been proven at some of the biggest clubs in the world.”

Merrick said that if Thompson played for another A-League club for a season or two before retiring it should not damage the potential for him to then return to the bosom of the Victory club in some capacity, whether it be as an ambassador, mentor or in some sort of coaching role.

“Absolutely,” he said. “Anyone who says Archie should end his career now so that he’s a one-club player, I don’t see the sense in that line of thought. I think, as they say in Scotland, ‘you’re a long time dead, so make the most of your life’.

“Look at Archie’s fitness. He doesn’t have an ounce of extra weight on him, he’s still got his agility. He’s not going to cover 12 kilometres in a game, but he’ll be where it counts when it’s needed, whether he’s coming off the bench or starting.

“Archie is there to finish things off and others can do the hard work. Just leave him to play in the penalty box.”