Daniel Arzani's meteoric rise to Socceroos stardom took a massive step forward with an explosive 20-minute spell in the international match against Hungary in Budapest. 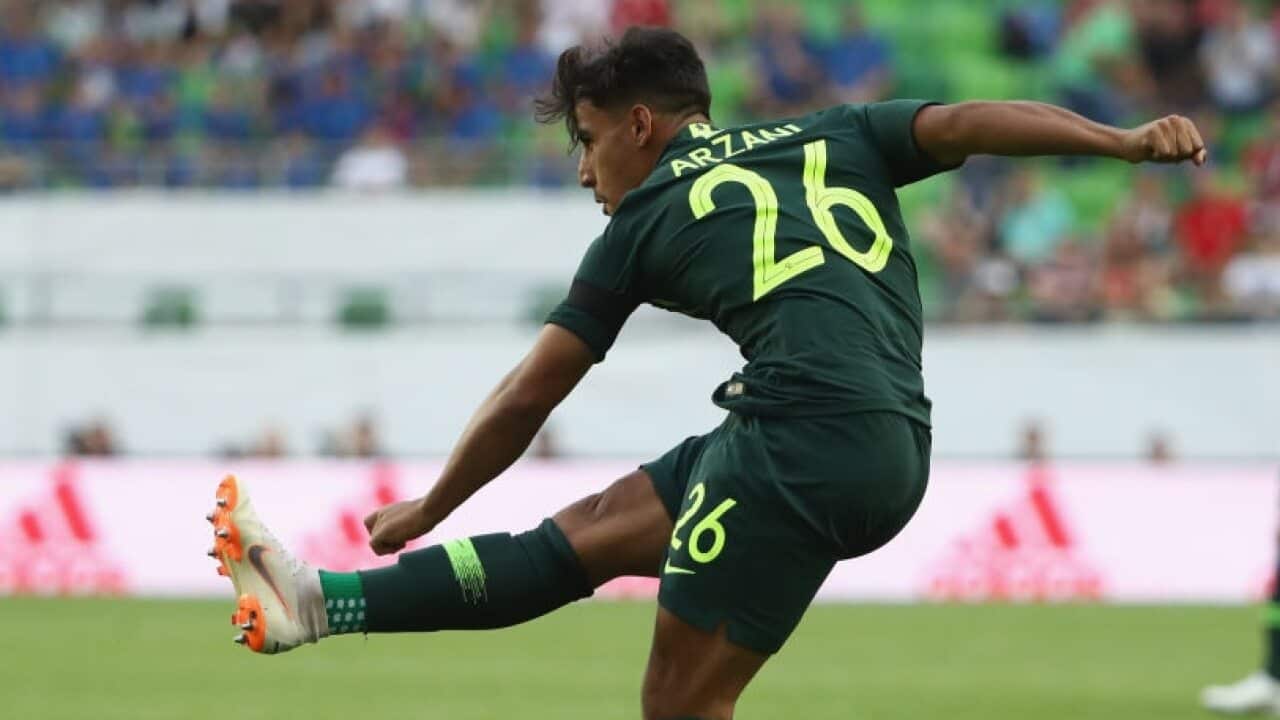 The Melbourne City whiz kid who could not get a game in the A-League seven months ago is poised to play a role in Australia's 2018 FIFA World Cup campaign that kicks off on Saturday night.

Who knows, after his dazzling performance against the Magyars he might even start in the Socceroos' first match against France in Kazan.

Arzani, who at 19 will be the youngest of the 736 players in Russia, came on in the 73rd minute for Robbie Kruse and, within a minute, was on the scoresheet with a dipping shot that went in under the body of goalkeeper Denes Dibusz to give the Australians the lead.

It was clearly a gift but to his credit Arzani, being the positive player that he is, had only the opposing goal in sight after he received the ball from substitute Jackson Irvine and got himself into a shooting position.

The game was headed for a 1-1 draw due to a late own goal from captain Trent Sainsbury but two minutes into injury time Arzani took matters into his own hands again.

He found Irvine with a superb, weighted pass into space and the midfielder's low cross was diverted into his own net by defender Tamas Kadar.

Arzani also came up with a few individual numbers of high quality that would suggest that this young man not only can wear the green and gold jersey with distinction but also has the audacity and such belief in his ability not to be intimidated or overawed by any team or opponent.

Arzani seems to have no fear and he's so confident that he comes across as cocky, even arrogant. Positively arrogant, that is.

He hardly rejoiced at his first goal for Australia, which might indicate that he feels he should leave the big celebrations for better goals in the bigger games.

It could be pointed out that throwing him in at the deep end against the French could be counter-productive because his inexperience could be brutally exposed.

However I very much doubt that Arzani would lose too much sleep if he were to fall short against the French.

Which is why coach Bert van Marwijk might be seriously tempted to give Arzani a chance to show what he can do on the biggest stage of them all.

A 2-1 victory, coming off a 4-0 rout of the Czech Republic, gives the Socceroos plenty of confidence and momentum for the forthcoming tests against France, Denmark and Peru.

Yet if you take away Arzani's spectacular contribution, you get the feeling that the Socceroos went backwards after their convincing triumph against the Czechs eight days earlier.

After a poor first half in which they lacked cohesion and drive especially in midfield, the Australians improved slightly after the break but van Marwijk would have noticed a few worrying trends that do not augur too well for the World Cup.

Full-back Josh Risdon can be dangerous going forward but he was given a torrid time by his direct opponent who exposed his defensive limitations, while Mark Milligan was strangely very erratic in his central defensive role.

The Hungarians were the better team in the first stanza and only goalkeeper Mat Ryan, two goal line clearances and the bar stopped them from taking a deserved lead.

'Fantasista' Tom Rogic struggled to get into the game in the hour or so that he was on the pitch. He came up with two mesmerising runs but overall he was unable to leave his mark on the game.

Up front young Andrew Nabbout appeared lost without proper service - he is not the type of player who can make things happen on his own - and was replaced by Tomi Juric after the break while wingers Mathew Leckie and Kruse worked hard as usual but were largely ineffective.

Playmaker Aaron Mooy was generally strong without being spectacular while creative midfielder Massimo Luongo seemed to be wasted in a holding role and he was replaced by natural screener Mile Jedinak at the start of the second half.

Van Marwijk opted for the same starting line-up in the two matches versus the Czechs and Hungarians which would suggest he may have settled on his favourite 11.

But events in Budapest may force his hand for the all-important clash with France in less than a week.

I don't think the starting 11 is a fait accompli.